Home / Comics / What is XX and how is it the future of Marvel NOW!

What is XX and how is it the future of Marvel NOW!

Marvel Comics’ Marvel NOW! initiative continues to change the face of the classic comic universe in some pretty monumental ways (especially for old school fans). The next big thing for the publisher and its stable of characters? XX. 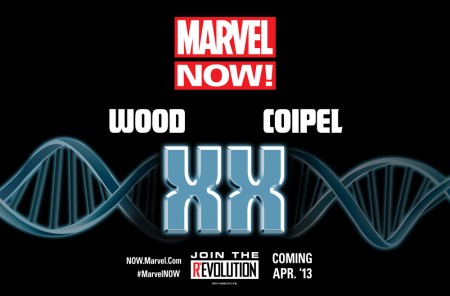 Of course, just what XX is is a pretty big mystery at this point.

With a DNA helix involved, I can’t help but think it has something to do with everyone’s favorite merry band of mutants- the X-Men. The ‘XX’ might refer to a female character (or characters) who’ll take center stage… but who knows?

One good thing for fans is that they won’t have to wait too long to find out what’s going down. The next Marvel U altering event will be in April of this year when XX (whatever it may be) kicks off. Till then- ‘suppose’ away dear readers.

Jason's been knee deep in videogames since he was but a lad. Cutting his teeth on the pixely glory that was the Atari 2600, he's been hack'n'slashing and shoot'em'uping ever since. Mainly an FPS and action guy, Jason enjoys the occasional well crafted title from every genre.
@jason_tas
Previous How does a Telltale produced Star Wars, Halo, or Half Life game sound?
Next CES13: NVIDIA raises its Shield