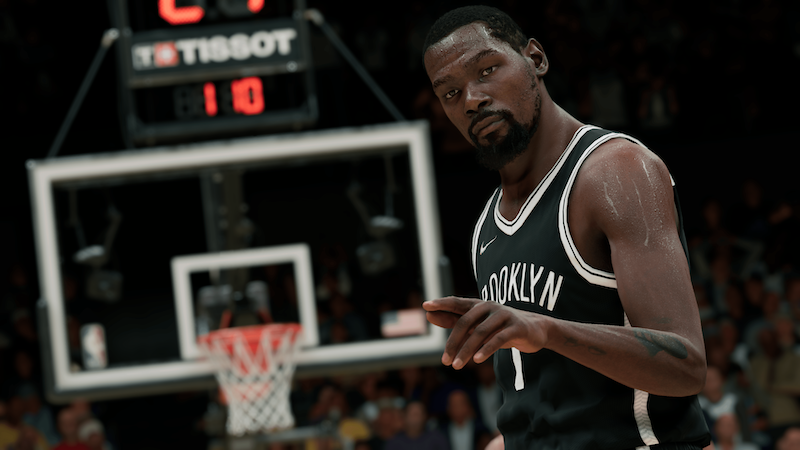 2K Sports’ NBA franchise returns for another run. NBA 2K22 upps the looks of the game yet again, and tweaks the gameplay to Bball-sim perfection.

Taking it back to the courts

If you’re looking for a basketball game to get into between watching your favorite squad, you have few options. Like with the NFL and MLB, the league pretty much has an exclusivity deal in place, without it being an official exclusivity deal.

That of course, is pointing to NBA 2K22, from 2K Games. Competition seems to have dried up almost completely, with some arcade options floating along every now and then, but really nothing else. If you want to play a season, sim-style, then it’s 2K or nothin’. So it’s a good thing that 2K Sports’ series is pretty fantastic.

I reviewed last year’s edition of NBA 2K, and while I was a newbie then, this time around I pretty much knew what to expect. And you probably do too, if you’ve played any of the series’ titles recently.

Still, familiarity doesn’t mean that this new edition isn’t worth a look, because it definitely is. And it sports some improvements that make it just that much better.

You know the score if you’ve ever played a sports sim before. Well, you do for the most part, since 2K’s latest NBA titles have given the formula a little bit of a shakeup.

The meat and potatoes remain the same though, in that NBA 2K22 seeks to deliver fans the ability to simulate a season (or career) in their favorite sport. You can do just that, while playing as your chosen squad or any other in the league. But that’s not all.

2K22 also delivers a WNBA roster, so you can dig into the NBA’s sister league as well. Want more? Well, you can also access a hefty collection of classic stars, from several different eras of basketball, the ability to manage coaching staffs, and the street game.

Like last year’s NBA 2K, that mode allows players to change rules and play something a little faster, and with any size team (2 on 2 anyone?). You can also get a game going in some pretty cool locales, like a ship.

Unfortunately, there are also micro-transactions. Frankly, I’m at a point in my gaming ‘life’ where buying stuff to get ahead in a game is looking pretty great, but I still don’t like it when it’s forced. And though it’s not here, this isn’t pay-to-win, it’ll severely tempt you regardless.

Nevertheless, and even with that thrown in, all of the above adds up to as complete a package as I think any basketball fan could imagine, with plenty to keep them busy for a long while.

Sports games can sometimes toe a very fine line. Yes, you do need to be able to pull off the actual moves that athletes do, but it can be tricky to do that while keeping said control simple and intuitive.

NBA 2K22 sort of does that, and it sort of doesn’t. I’m a casual player when it comes to sports titles. Yes, I used to play through entire seasons, but that was a long time ago, and I don’t spend hour upon hour ensconced in them at this point. I prefer something that’s a little more streamlined. And that’s not really 2K22.

Though the basics are easy enough to use and remember, there’s a ton more to this game’s… game. Executing what looks to be almost every play you can see being used by pro teams seems possible. That’s both good and bad from my standpoint.

I don’t want to give the impression that there controls are difficult, because they’re not, there’s just a lot to them. And if you’re intending to play NBA 2K22 in a somewhat more casual manner, you might miss out on a lot of what the game offers.

2K22 is a deep sim, and gives you a ton to do. Not that anyone will, but I’d definitely recommend playing through the tutorials for that reason.

NBA 2K22 isn’t head and shoulders above last year’s model in terms of looks. But that game already looked pretty terrific, so I can’t argue too much.

But the short answer is yes, the game does look good. And if you missed out on the aforementioned prequel, then you’re in for a treat. While I personally find hyper-realistic graphics styles (in general) to be a little stiff in practice, I also would be hard pressed not to say that 2K22 isn’t good looking.

Individual players are easily recognizable, all the teams and courts look just as you’d expect, and the animation is top notch. At times it can be jarring how realistic this game looks. Visual Concepts did another terrific job, and it’s a nice showpiece for how far along sports games have come.

As for the sound design, I’ll add that it’s likewise excellent. All the sounds of the game are present, including a decent booth.

Once again, as a non-basketball fan (or maybe lapsed might be a better descriptor) I have quite a few good things to say about NBA 2K. The series seems to genuinely improve every year, which is something that you don’t say all that often about sports titles.

It looks amazing on the Series X, plays excellently (though is maybe a little too deep at times, if that’s possible), and offers a ton to do and dig into.

NBA 2K returns for the 2022 season with another winner of a game. Improving on the looks and control of the previous entry, Visual Concepts has crafted a title that should make any NBA fan happy. Just make sure to watch out for the micro-transactions and you should be fine.

Jason's been knee deep in videogames since he was but a lad. Cutting his teeth on the pixely glory that was the Atari 2600, he's been hack'n'slashing and shoot'em'uping ever since. Mainly an FPS and action guy, Jason enjoys the occasional well crafted title from every genre.
@jason_tas
Previous Trailer: Meet the five factions of ELEX II
Next Trailer: The Adeptus Mechanicus makes its way into Warhammer 40K: Gladius