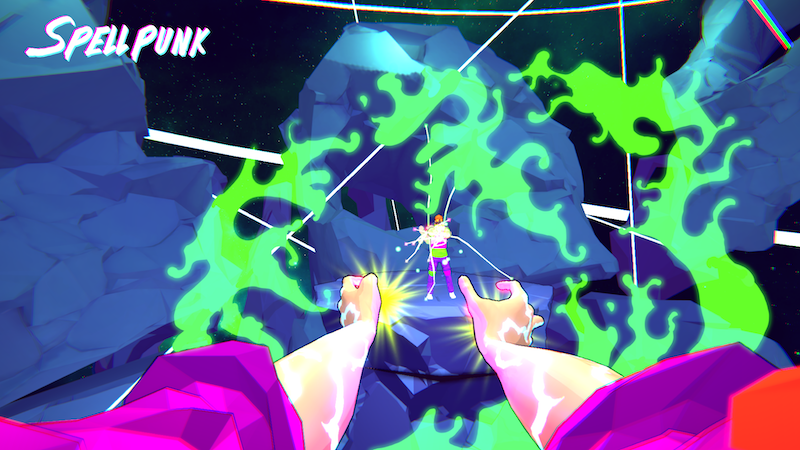 Casting spells on virtual reality headsets today is Spellpunk VR. The game features a one-on-one battle between magic-wielders and is in early access.

As VR games go, this one’s pretty unique. Spellpunk VR gives players the ability to virtually ‘cast’ spells by actually drawing them out in space. Yes, that sounds a little bit Dr. Strange-y.

There would be a reason for that. Developer Incineration Productions is going for a comic book feel with the game and its one-on-one combat. It’s all in on that, with a comic on the way down the line that’ll expand Spellpunk VR’s lore.

Get ready to flex some punk prestidigitation and cast some devastating divinations as you become (and face off against) mighty magicians in a stunningly surreal world with a vibrant comic book aesthetic and sick musical tracks. In SpellPunk VR, you embody a full-body avatar who must duel in fast-paced mana-manipulating multiplayer battles. SpellPunk VR puts extraordinary powers at your fingertips, allowing you to cast some wild wizardry against offline or online foes by drawing magical symbols that unleash terrorizing magical attacks. There’s no spellbook or menus here, champ. You’ll have to correctly draw your various spells in the air with your hands while facing opponents in the three leveled game modes.

Here are the finer points of gameplay:

Spellpunk VR is available now via Viveport and Steam, in Early Access, for play exclusively on PC VR headsets. If you don’t know, that means it’s not quite done yet, but even so you can pick up a copy. So as you play, the game will receive updates as it heads towards its final ‘retail’ edition.

As for compatibility, there’s a good deal of that too. The game supports a pretty wide scope of headsets too. Those include:

Jason's been knee deep in videogames since he was but a lad. Cutting his teeth on the pixely glory that was the Atari 2600, he's been hack'n'slashing and shoot'em'uping ever since. Mainly an FPS and action guy, Jason enjoys the occasional well crafted title from every genre.
@jason_tas
Previous Google’s Stadia blasts past 1 million installs thanks to free offer
Next Top Gun helmet pins lifting off from Icon Heroes