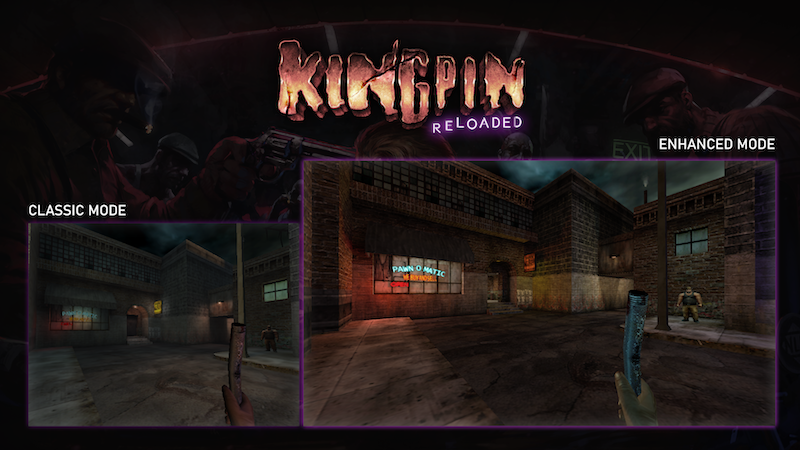 The Quake Engine resurgence continues with forgotten 90s gem Kingpin. Ready to rise to the top of the criminal underworld once again?

If you haven’t heard of Kingpin before, you might be thinking it’s a game about Marvel Comics’ Kingpin of crime. It’s not though, far from it. Kingpin was a gritty, noire-filled, action affair starring the player as a common thug that’s looking for vengeance.

“Kingpin doesn’t get the recognition it deserves, due to unfortunately releasing in an era when games were blamed for societal problems,” said Frederik Schreiber, founder of 3D Realms. “We have the privilege of giving it a second chance for people who never heard of it, and sprucing it up for diehard fans yearning to go back to a life of (simulated!) crime.”

While it certainly wasn’t the cause of the “societal problems” back in the 90s, Kingpin definitely did have a rep. It was one that it deserved too, as it was soaked clean through with violence and profanity. Not that I’m saying that’s a bad thing…

The game now has more than bashing bad guys with lead pipes too. While there is still plenty of action, plus a nice location-based damage system, Kingpin now allows gamers to recruit characters for their syndicate. That comes via a set of conversation options. It sounds pretty neat, and should give the game a bit of lite simulation.

Kingpin Reloaded will have all of that, plus some stuff that you might expect from a modern re-release. Players can expect to see controller support, plus “4K resolution, ultrawide support, and improved graphics in Enhanced mode”.

If you’re looking for multiplayer, you’ll find that in the Gang Bang mode, and 3D Realms is even throwing in a No Violence mode to boot. No word on what that might entail, but it sounds like it could be interesting.

All of the above will land this year, though there’s no word on a release date just yet. Expect to see Kingpin Reloaded hit for the Xbox One, PS4, Nintendo Switch, and PC.

Jason's been knee deep in videogames since he was but a lad. Cutting his teeth on the pixely glory that was the Atari 2600, he's been hack'n'slashing and shoot'em'uping ever since. Mainly an FPS and action guy, Jason enjoys the occasional well crafted title from every genre.
@jason_tas
Previous Game Backlogs, Sales and the Downside of it all
Next Final Fantasy 7, Cyberpunk, Iron Man VR all delayed