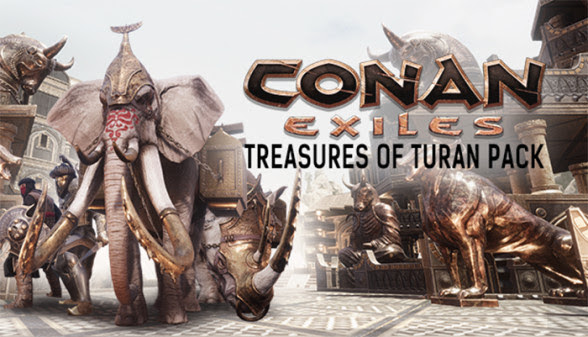 Home / News / The Treasures of Turan arrive for Conan Exiles

The Treasures of Turan arrive for Conan Exiles

Conan Exiles, one of the best survival games in a long time, is still going strong. This week, developer Funcom is rolling out a fresh location pack, complete with everything that goes along with it, called Treasures of Turan.

As you can see, there’s a lot to Treasures. It includes new additions in the form of fresh:

So if Conan Exiles has been feeling a little same-y to you, this seems like it’d be just the thing to shake things up. But the downloadable content isn’t stopping here.

Conan Exiles is set to receive a bunch more content through 2019. Riders of Hyboria, Blood and Sand, and Mysteries of Acheron are all coming up. And to that end, Funcom has also announced a Season Pass.

As you probably could have guessed, the Pass will net you all of the above for one tidy sum. So if you’re into Exiles for the long haul, you might want to think about picking up the Pass.

It’s available now, along with Treasures of Turan. Well, if you’re playing on the PS4 or PC anyway. Xbox One gamers will have to wait just a little bit longer to dive into the Hyborian world’s far east. There’s no launch date yet, but Funcom says “soon”.

Jason's been knee deep in videogames since he was but a lad. Cutting his teeth on the pixely glory that was the Atari 2600, he's been hack'n'slashing and shoot'em'uping ever since. Mainly an FPS and action guy, Jason enjoys the occasional well crafted title from every genre.
@jason_tas
Previous Marvel Ultimate Alliance 3 arrives on Switch this July
Next First PlayStation 5 details emerge