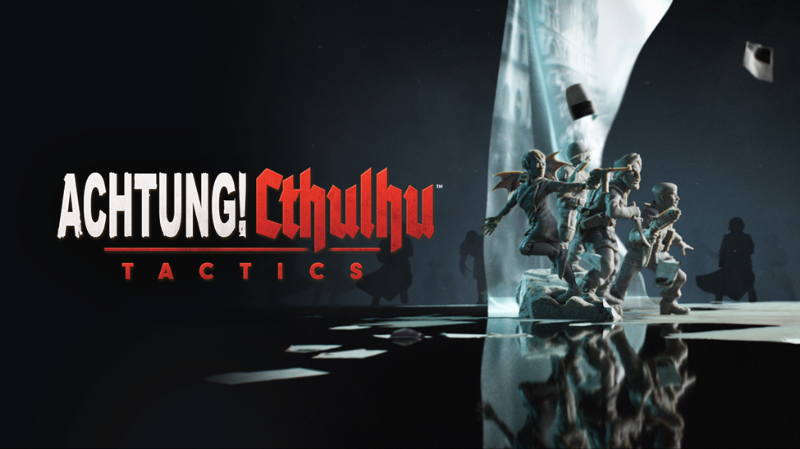 Horror and strategy meet on the battlefields of one of the world’s “great” wars in Achtung! Cthulhu Tactics. If you’re into any of the above, this is a title you should be checking out.

Achtung! Cthulhu Tactics is admittedly a game which flew under my radar upon its initial PC release in 2018. Anyone who knows me will realize that is surprising, because two of my favorite genres. That being Cthulhu mythology and tactical strategy games.

These two great tastes were finally joined in an unholy union with this game. Now that it’s come to the Switch, I am happy to report that the result is an engaging and satisfyingly deep SRPG.

Following the successful allied invasion on D-Day, the German Nazi forces turned to their secret weapon in a last ditch effort to salvage the war effort. Black Sun Forces working with the conventional German military would be the Axis’ best chance to win against the allies.

Players take control of an elite squad of allied soldiers to thwart that effort. Each soldier specializes in different weapons, tactics and support skills. The player guides their squad through a campaign to defeat both Nazi and occult forces. Throughout that campaign, players will face everything from typical German troops, to shoggoths and beyond. Each enemy provides different challenges, but more on that in a bit.

I love this premise. As a student of history, horror and strategy video games, this scratches enough of my itches to be worth a purchase based on the themes alone. The game is thick with flavor text, fun descriptions and excellent character interactions. That all heightens the narrative and atmosphere to great degrees.

Take that and add in the in-depth character load outs, experience and skill progression and side missions. The premise goes from something I love to something I couldn’t wait to sink my teeth in to.

As far as turn-based strategy games go, Tactics is pretty straightforward. Players move each of the characters, drawing from a pool of action points for each.

Between combat encounters, players freely move the squad around the environment by clicking on a space on the ground. Combat immediately begins when you enter a combat zone, and characters are automatically placed into position for the first turn. I enjoyed exploring environments in this way. Even if some of the missions were slightly constrained and limited. In this way, exploration was more of a facade, and the exploration was linear. For once, I didn’t mind the linearity though. It helped push missions that feel bloated with extraneous combat counters along.

When I say that missions, especially early missions and side missions, felt bloated, I mean that the combat encounters can take anywhere between 10 – 15 turns without providing too much of a challenge. The resulting encounters feel like they exist only for that express purpose. The truly thought provoking and interesting combat encounters come later in the campaign, when more occultish monsters begin to appear and test the sanity of player characters.

If you have ever come into contact with any type of Lovecraft media at all, you are aware of the impact sanity has on the setting. Achtung! is no different in this sense. When characters take damage, they and their comrades take hits to sanity.

Enough sanity damage causes adverse psychological effects, like giving characters nerfs to accuracy and fewer action points. I like the way sanity is implemented, and felt that the characters reacted in reasonable ways, given the craziness of the world around them. To ease sanity problems, there are different items players can unlock, like brandy and letters from home. These fortify willpower and let characters bypass psychological tests.

I liked this throughout the majority of the game. But in certain circumstances the missions and narrative structure does not lend itself to this at all. For example, early on the player squad finds occult relics and triggers a shoggoth invasion.

After repelling the initial wave of shoggoth, the mission ends. The next main mission picks up immediately, but players can take a break and play a side mission if they want. This certainly isn’t game breaking, but I do wonder why the developers didn’t make these side missions available elsewhere while skipping their normal appearance.

The game controls well and feels great both on a television and on the Switch itself. I took Achtung! traveling with me, and playing the tactical game on the go was always a great way to pass time.

Achtung! does not break any new ground in terms of presentation. In fact, there are many circumstances where the game looks and sounds like an indie game. Of course, that is exactly what it is. That’s not a bad thing, but it does become apparent at times.

The biggest problems with presentation I noticed came in the voice lines of the characters. I understand that it must be difficult to have characters have multiple different lines for the same thing, like missing an enemy. I totally get that. But hearing the characters say the exact same thing, time after time, got old quickly. What began as charming looks into personality became grating quickly.

The camera is another problem I noticed. Especially in closed and tight spaces, it was tough to get the camera in the right spot. On the bright side, most everything the camera did let me see, from character models to environmental art, looked great.

My favorite part of the game’s sound design, bar none, is the fun 40’s-era music that plays between missions. The music gives an upbeat vibe to character progression.

Achtung! is an exceptionally average strategy role playing game stuck in an excellent theme. I truly loved the way characters came together and interacted in this alternate history. I also truly enjoyed growing my characters and figuring out tricky combat situations. Slogging side missions and presentation problems hold the game back from true greatness, however.

Achtung! is an exceptionally average strategy role playing game stuck in an excellent theme. I truly loved the way characters came together and interacted in this alternate history. I also truly enjoyed growing my characters and figuring out tricky combat situations. Slogging side missions and presentation problems hold the game back from true greatness, however.

Erich was introduced to gaming by his grandfather before he could walk. Since then, he has grown up loving Nintendo and most games in general. He couples his love of videogames with journalism to cover news, provide reviews and tell it how it is in the gaming world.
Previous DC Universe more than doubles digital comic slate
Next The Walking Dead ep 4 incoming with boxed copy