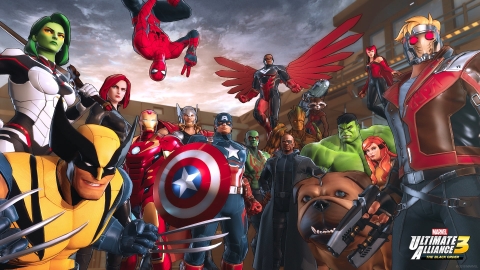 Marvel Ultimate Alliance 3 is coming, and will continue the series under the Marvel Games and Koei Tecmo banners.  And yes, is exclusive to the Switch.

“As longtime fans of the franchise, we could not be prouder and more excited to bring back ULTIMATE ALLIANCE with its biggest game yet,” said Mike Jones, Vice President & Executive Producer, Marvel Games. “MARVEL ULTIMATE ALLIANCE is all about teaming up with your friends and creating your own ‘dream team’ of Super Heroes to go on adventures across the Marvel Universe, and Nintendo Switch is perfect for delivering on that promise of cooperative gameplay and shared experiences.”
“The MARVEL ULTIMATE ALLIANCE games have been beloved by fans for more than a decade, and this new installment on Nintendo Switch will deliver even more of the thrills and heroics that the franchise is known for,” said Doug Bowser, Nintendo of America’s Senior Vice President of Sales and Marketing. “Thanks to our partnership with Marvel, the fate of the Marvel Universe will literally be in the hands of Nintendo Switch players, whether they’re at home or on the go.”

Unveiled at the Video Game Awards last night, Marvel Ultimate Alliance 3 continues a series that’s been effectively dead for almost a decade. That’s not to say that it’s still not popular, because it is.

And it’s not just still hanging around because Marvel Comics characters are the stars. Ultimate Alliance has kept an audience simply because it’s a set of pretty great aRPGs. The first one might be the best one, but really all of these games are terrifically fun. Yes, all. I include the X-Men Legends games in that conversation.

Along those lines, it’s great to see longtime X-Man Wolverine in this new game. That’d seem to continue the X-Men’s resurgence at Marvel. For their part too, Koei Tecmo promises that there will be “dozens of Marvel Super Heroes” playable. That’s in keeping with the original titles, and pretty much assures fans that this won’t be an all-Avengers party.

Changing up the formula

Speaking of parties, MUA3 will indeed support 4 player co-op, of the online and couch varieties. It’ll apparently be playable with just the Switch’s joy-cons too, which is interesting.

As you might’ve noticed in the trailer too, Ultimate Alliance 3 will have a new viewpoint. The game has a “heroic view”, which is basically a more zoomed perspective. From the looks of it, it kind of makes things feel more like a traditional action game than an isometric aRPG. Not to fear though loyalists, you’ll get that traditional angle in there as well, so you can play either way.

There’s no release date as of yet for this bad boy, but I’d expect that the Switch-exclusive will be along some time in 2019.

Jason's been knee deep in videogames since he was but a lad. Cutting his teeth on the pixely glory that was the Atari 2600, he's been hack'n'slashing and shoot'em'uping ever since. Mainly an FPS and action guy, Jason enjoys the occasional well crafted title from every genre.
@jason_tas
Previous Prey: Typhon Hunter DLC pack hitting December 11th
Next Classic PC FPS Blood returning from the grave