Mezco adds a true horror (and comedy) legend to their One:12 Collective with Evil Dead 2’s Ash. The result is maybe the best figure the hero’s ever gotten.

Ash is pretty unique when it comes to horror movie characters. For starters, he’s not a monster, slasher (well…), or killer (uh… pretty much). What he is, is a hero. Unlike most of the human fodder in a horror flick, Ash here not only survives Evil Dead 2, he becomes a kind of horror movie superhero. And man, is he an awesome one.

Equal parts goofy, badass, and insane, Ash is an icon at this point. Not only did he get a direct sequel to ED2 with Army of Darkness, but he’s also received a full three seasons of a cable TV show. The first season was great, though the show honestly kind of spun itself out by the close of season three.

This figure is based on the original version of the character though, as he appeared in the reboot that was Evil Dead 2. And yes, I said it was a “reboot”, just stop it with the sequel talk. It was a reboot. Other wise it makes even less sense than it already does.

But enough talk of the rest of the series, and what’s a reboot and what isn’t, cause we’re here to talk the One:12 Collective version of Ash himself. And he is freaking awesome.

While I’ve has issues with the One:12 boxes as of late, I definitely do not have a problem with this one. Mezco has used the same model for this packaging as it has with every other recent One:12 release, but it looks so much better than pretty much all the rest.

The reason is the Evil Dead 2 logo. The blood-red lettering looks freaking mazing splashed across the jet-black box. It’s simple, and in this case it’s awesome.

Another issue that I occasionally have with One:12 figures are the accessories that are included. I got kind of spoiled in this category since the first few rounds of figures almost all had amazing pack-ins. A few didn’t though, and that seemed to be an ongoing trend. The way I see it, if you’re spending premium cash on a collector-figure, then you should get a great assortment of accessories in the box.

Ash in no way disappoints on that front. 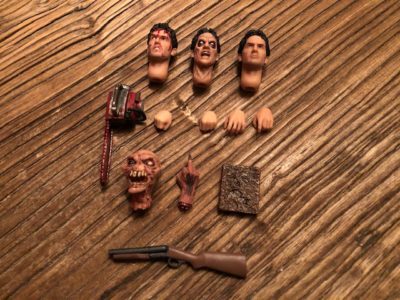 Alongside Ash, you’ll find multiple hands, his signature chainsaw, and his sawed-off shotgun. But there’s so much more. You also get a deadite head (which fans should instantly recognize), a lil’ Necronomicon, and Ash’s severed hand… flipping him off! To be fair, I think the hand should have probably been in a crawling pose, but I’m not gonna complain too much. This is some cool stuff. Oh, and there are three head sculpts in the box too.

Not only do you get a “plain” faced Ash, but you can also pop on a bloodied head, and even a 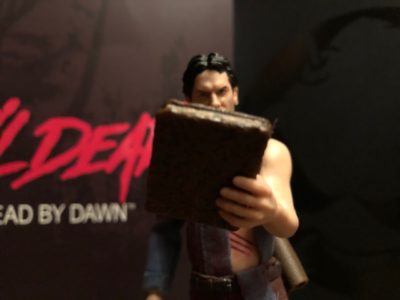 deadite-possessed head. That in and of itself is making this fan very happy indeed. Pretty much. I would have loved to have seen an angry Ash face, or a scared/confused Ash face. But if you think about it, which head would you have sacrificed to get those? I doubt Mezco would ever consider including a five-pack of portraits, so you’d have to get rid of something. See what I mean?

Also worth a mention is that the standard portrait doesn’t look exactly like actor Bruce Campbell. I don’t know what it is, but something is off. He looks good, just not perfect and I can’t put my finger on why. Though I will say that the bloody head looks a lot more like the star (and the deadite-possessed head looks perfect).

Everything in this box is pretty great though. That includes the accessories, the alternate hands and heads, and the iconic weapons.

As far as Ash’s clothing goes, it’s as fantastic as everything else. The shredded, blood-stained blue shirt looks perfect, and the straps that hold on the shotgun pouch are great too. They have a nice secure fit, and generally don’t seem to move around to much. That’s a very good thing.

I would have liked to gave seen some detailing on the pants, like some more dried blood and maybe some mud, but again, I’m not going to complain. They look good enough. As for the articulation, it’s solid, but might be a bit too tight in the joints.

One:12 figures all have similar poseability, and you’ll find similar here. Ash has double joints in the knees, single joints at the elbows and ankles, a ball joint at the neck, and a great range of motion in the wrists, hips, and shoulders. He’s also got both an ab and chest crunch/swivel. 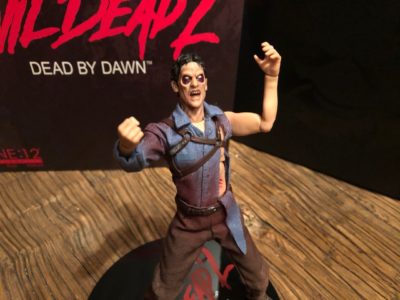 The mid-section movement isn’t as great as I would have liked however. And Ash is also unable to really convincingly draw his shotty. That’s a little disappointing. But does any of the mean that you can’t get him into some awesome-looking poses? Hell no it does not, and it’s probably picking (more than) a bit on my part.

Overall this one’s a winner

Is this my favorite One:12 figure yet? Actually, it might be. Ash is amazing across the boards.

Look, I’m a big fan of the franchise and as you can see I’ve found a few things to be picky about. But that’s just it, I’m being picky. I’m being a little extra greedy too, since what Mezco has done here is flat-out amazing. 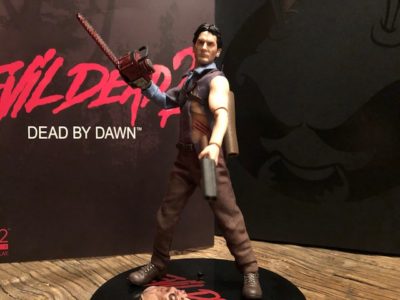 The One:12 version of Ash is easily the best Ash figure of all time, in this or any scale. It’s awesome in almost every way and will be sitting in the place of honor, next to my monitor, for a good long time to come.

Hail to the king baby

The outfit is almost perfect - 95%

Great articulation, though the joints are really tight - 93%

Great face sculpts. Not perfect, but they look good - 90%

Do you like Evil Dead and/or Army of Darkness? Then there's a good chance you're going to love this action figure. The One:12 Collective version of Bruce Campbell's Ash is loaded with accessories, phenomenally detailed, and absolutely rocks in just about every way.

Jason's been knee deep in videogames since he was but a lad. Cutting his teeth on the pixely glory that was the Atari 2600, he's been hack'n'slashing and shoot'em'uping ever since. Mainly an FPS and action guy, Jason enjoys the occasional well crafted title from every genre.
@jason_tas
Previous Happy Halloween – here’s the first footage of the PS4’s new MediEvil
Next One:12 Freddy’s coming for you. Mezco details their latest horror figure