The mutant hero known as Cable is now available for pre-order from Mezco. The future X-Man looks to be one of the most impressive figures yet.

While I love this line in general, the X-Men figures kind of hold a special place in my heart. So far we’ve gotten one character with (four versions of) Wolverine, but more are on the way. Cyclops and Magneto are coming up, and Cable is here right now to pre-order.

Cable is set to ship in the May to June 2019 timeframe, and does cost a bit more than your standard One:12’er. That’s due to the fact that he’s got some lighting built in. Cable features a light up eye (one in each head sculpt) as well as part of his chest armor. He’s also got a load of cool accessories. 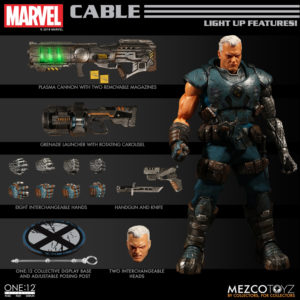 THE ONE:12 COLLECTIVE Cable FIGURE FEATURES:

Each One:12 Collective Cable figure is packaged in a collector friendly box, designed with collectors in mind.

The One:12 Collective Cable is available for preorder at http://mezcotoyz.com/one-12-cable

Jason's been knee deep in videogames since he was but a lad. Cutting his teeth on the pixely glory that was the Atari 2600, he's been hack'n'slashing and shoot'em'uping ever since. Mainly an FPS and action guy, Jason enjoys the occasional well crafted title from every genre.
@jason_tas
Previous Fearscape #1 from Vault Comics gets Sandman-inspired variant
Next Call of Duty: Black Ops 4 Blood of the Dead trailer arrives