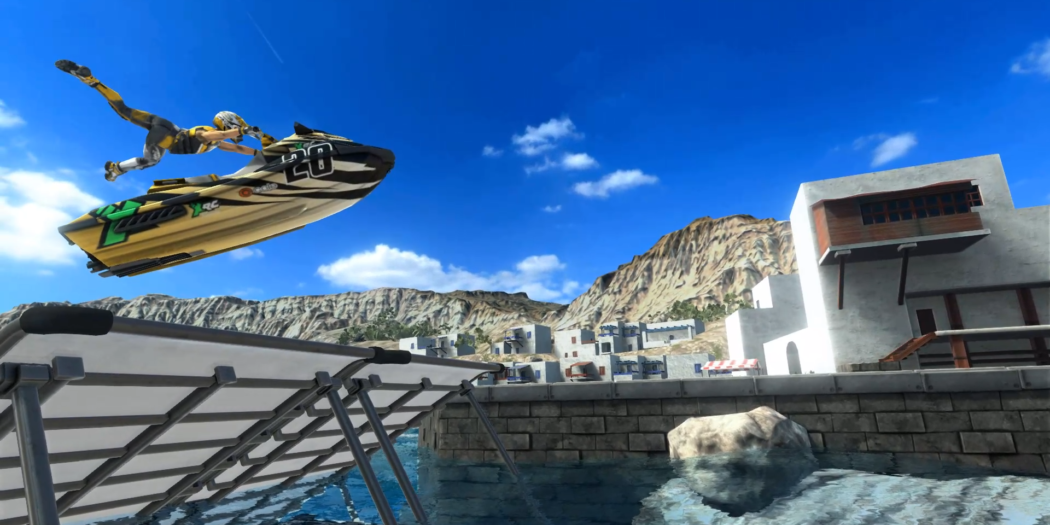 There shouldn’t be a Nintendo gamer out there who has bad memories of Wave Race. The game, which was one of the first released for the N64, did almost everything right and was generally tons of fun. Post that, there was a GameCube release as well, though I have no experience with that one. And that was it for the series. Actually, now that I think about it, jet ski racing titles in general are a scarce breed.

Seriously, how many times a year do you see a jet ski racer? Once? Subtract mobile games from that and the answer’s probably zero. That is, by the way, what Aqua Moto started as – a mobile game series. Released on iOS and Android, Aqua Moto was pretty highly reguarded, and has spawned a few sequels. This is one of them, but unlike it’s siblings, this one has made its way to multiple consoles.

Overall, it’s translated pretty well, though it is tough as nails. And no, I’m not kidding. 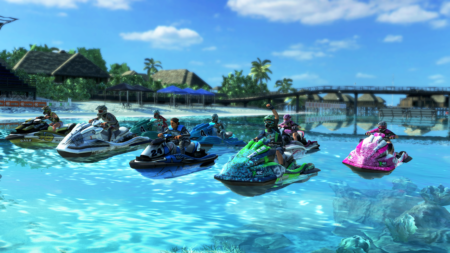 This is a racer at heart, and sends its players careening around a watery course at breakneck speeds. Along the way, you’ll have to either hit checkpoints or pull off tricks… or both at times.

But let’s talk about those tricks first. You can do tricks manually, which is kind of iffy, or with a single button press. Trust me on this, use the A button. You’ll actually (most of the time) pull off the trick without issue.

Some tricks can be effectively done when vaulting off of a massive wave, though not many. You have a tendency to crash and burn when doing that (more on that later). The safest way to perform a stunt is by jumping off of a ramp, which are included strategically on courses. 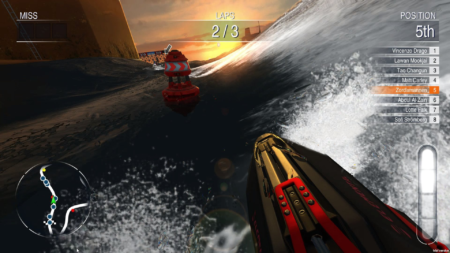 I had a devil of a time actually hitting these ramps when I first started playing Aqua Moto, which is a common theme with this game. It’s fairly easy to miss them, and very easy to hit them at odd angles. While I did get a lot better the more time I spent with it, I still found that hitting ramps at the desired angle isn’t so simple.

And that brings me to one of the other constants in Aqua Moto Racing Utopia – the checkpoints. Scattered throughout the racecourses are buoys. These serve as checkpoints that you have to pass as closely as possible to get max points. Here’s the thing though, like the tricks, this sounds a lot easier than it actually is.

At first, it was nigh impossible for me to get past more than a few buoys before failing the course. Yes, that’s right, you don’t have to just go back and pass it the right way again – you will fail the course if you miss three buoys. And again, doing that -banking into hairpin right and left turns- is not easy.

Some buoys are all but hidden by the camera before you get right on top of them as well, complicating things. Don’t get me wrong though, this isn’t undoable by any means. It might seem that way when you first play, but I got the hang of it somewhat quickly. Basically it amounts to staying on your toes and hammering the controls to pull off the turns as fast and tight as possible. It’s never easy, but it’s not impossible.

Oh, and I also have to mention the crashing. Utopia is 100% unforgiving with your racers. You will get bashed apart on many an occasion, there’s no escaping it. Even seemingly small bumps can send your athlete careening off of his or her ski. My reactions to this ranged from laughter to frustration. 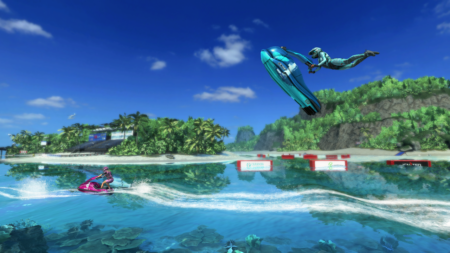 One of the best things about this game, by far, is the way it looks. It’s not a stunner, but Utopia is a pretty good looking romp. Racers and their rides look very nice, and the courses mostly look really cool, even the smaller ones.

This goes for the surroundings and the waves alike. You’ll race around rocky coves, beachfront locales, and even rigs out at sea. Most of the maps are pretty different from one another, and they all feature some very nice looking water.

The briny deep isn’t as sharp looking as some games manage to get it, but it does look good on the Switch. And while the waves might get a little too rough at times, it’s neat to see all that chop and fun to try and hit the bigger ones just right.

Just a note too, as I pretty much have to mention that Utopia looks significantly better in handheld mode than it does on a TV. Not that it’s ugly on the big screen, but it’s much harder to see flaws on the Switch’s little monitor. 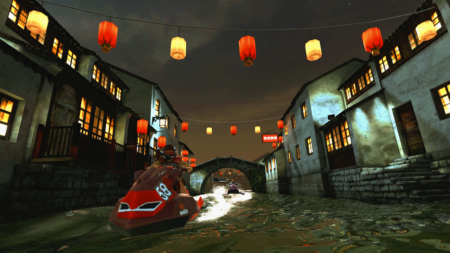 A day at the beach

I know I might have been a little hard on Aqua Moto Racing Utopia here, but it’s honestly not a bad game. I had quite a bit of fun with it. There is, however, what I’d call a steep learning curve that you’d better get over fast if you plan on spending any kind of time with the game. Because if you don’t, you’re not going to get very far at all.

With solid graphics and some fun courses though, there’s actually quite a bit of fun to be had in this watery racer.

Control is unforgiving, but not bad - 82%

There's a lot to pick at in Aqua Moto Racing Utopia, but there's also a lot to enjoy. The game has issues with it's difficulty, yes, though a lot of that comes from its design. The graphics are solid however, the courses are mostly fun, and the control isn't bad. If you can get past the negatives, there's fun to be had.

Jason's been knee deep in videogames since he was but a lad. Cutting his teeth on the pixely glory that was the Atari 2600, he's been hack'n'slashing and shoot'em'uping ever since. Mainly an FPS and action guy, Jason enjoys the occasional well crafted title from every genre.
@jason_tas
Previous Classic Star Trek meets Transformers in new IDW mini-series
Next Masters of the Universe ReAction Figures Wave 4 (Action Figure) Review