2. The time trial challenges and rewards. I was stoked to see that anything you got out of these rewards are seen when equipped. Now I can have the most fashionable horse and beautiful mask that I want.

3. The easter eggs found throughout the game – lizards, fruits etc. These little additions put that extra little sprinkle on top of an already great game. While most of these come from the original, some actually aren’t! So be on the lookout for little shiny things!

4. The particle effects such as dust falling off the collosi as they move. Nothing convinces me that something is huge and ancient as much as the dust, hair etc. falling off the colossi as it moves as well as the footprints they leave behind. The enhanced graphics is really pulling it here!

5. The complete 100% faithful recreation of the game – no drastic changes to gameplay or story. Most remasters or remakes fail at probably the easiest thing. If fans want a remaster, don’t change the core game. It really is that simple.

6. Improvement of the Inverse Kinematics that the original was highly acclaimed for e.g. when climbing onto the 4th colossus’ sword there is a chip in it and he smoothly moves his hands into the chip! Very impressive! Although it can still be finicky at some parts, its mostly really good.

7. Ambient audio, sound effects etc. have been vastly improved and none of the original boss tracks have been changed.

8. The water effects omigawd! The water looks so delicious and even more so in water based boss fights e.g. the Avian colossus has a wonderful mist spray when you grab on, as colossi moves in and out of the water it slickens their hair/fur, Wander’s clothes also get soaked!

9. Agro seems to have improved navigation as he can at times auto navigate curving terrain and paths. 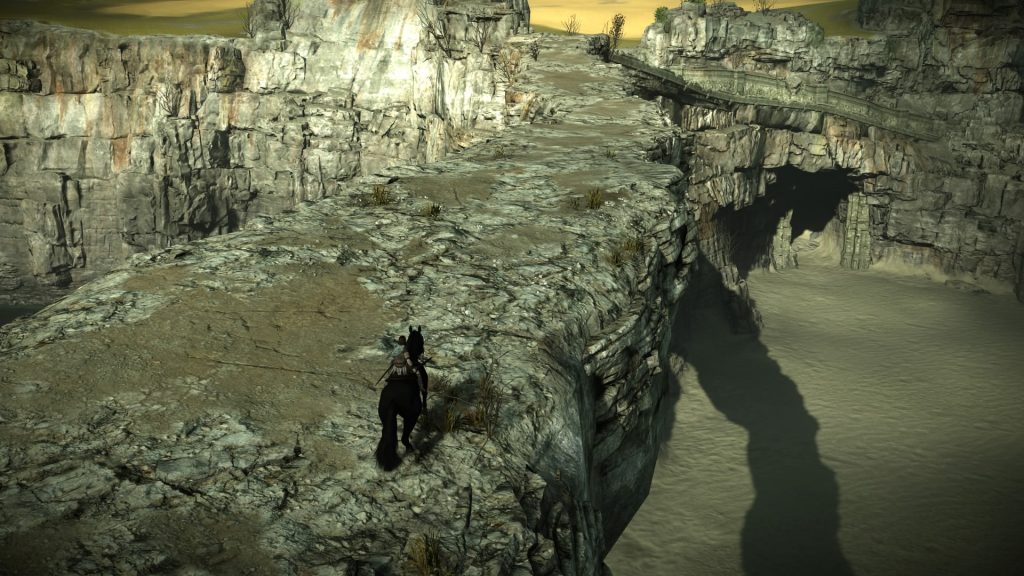 10. The world is beautifully designed and optimized – the rock formations look extremely realistic, the lapping ocean is so calming to watch, there is dust reflected in beams of sunlight peeking through the forest, there are animals and insects scuttling or flying about, the buildings have been textured with great detail and have patterns engraved into them to immerse you in this dead civilization that time forgot. This environments weren’t just given a new set of paints – they were redesigned and rebuilt yet still keeping to the original source material!

1. The camera is often an issue and at times you’re fighting it to keep it in place. This is probably the most frustrating thing in the entire game. Because the camera is on a swing arm and because you are going around and in between colossi limbs you can have a hard time seeing yourself if you are in an armpit or moving around on an arm. Even when you are riding around on Agro. Perhaps you want the camera looking directly ahead rather than at the floor? Unfortunately, the camera will automatically be panning to the floor like it dropped a penny and needs to find it.

2. The HUD is actually terrible. When fighting colossi I need to see when the white dashed circle reaches its peak for maximum damage. That’s really bloody hard when its on top of a light yellow circle. It would have been great to have the original HUD as an option and be able to change the size and color of the HUD depending on your preferred brightness. Most of the time I used Wander’s grunts as my cue to stab rather than the HUD at all.

3. All this concept art but no export button!? There is a ton of amazing art that I can’t export all at once leading to the mind-numbing task of using the PS4’s screenshot option for every single image – and there is a crap ton of them! You put all this unlockable art in but no way to just export them easily in one go to the PS4’s gallery? You bring dishonor upon your artists!

4. If Wander gets hit, he gets literally “WASTED“. If Wander suffers a direct hit from a colossus he goes limp and lies down on his stomach for like 6 seconds. While this isn’t all that bad and I am not entirely sure whether the same thing occurred in older games, it really stifles the battle’s flow. And, as much as I enjoy realism in games, watching Wander get absolutely gored to death by the kitty colossus is damn depressing. As Wander is just about to get up from the first charge, it charges him again and ends up putting him in a painful cycle towards death. Where’s the realism you ask? Rhinos and elephants can do this in real life – keep charging and stomping a person to death. So, I think his knock down time really should be shorter. Give him a break jeez.

5. No skipping the end cutscene. The end cutscene is like 15 minutes and I can’t skip it? The heck? But I can pretty much skip every other cutscene? I don’t understand this logic. If I’ve finished the game once I want to skip the ending and continue another playthrough lickity split! Why won’t you let me play!?

6. Agro is little slow. Yes, this horse which speeds up Wander’s travel time is slow. Why? Sometimes Agro can’t navigate some bushes or little rocks that he should. Sometimes you just want Agro to avoid some big rocks so you can shoot the colossus in the sand and sky. Sometimes you got off Agro to stop at a shrine and he somehow wanders (badumtss) off and so you yell “Agro!”. But he doesn’t pop out for like 30 seconds. Then somehow instant transmissions behind you.

7. The voice acting can be bad. I don’t think they replaced the voices at all but in a certain cutscene Wander’s voice acting (or chosen audio file?) is actually terrible considering how devastating the scene is. If the voice actor could still be contacted maybe they could have redone that particular part. If not I think it should have been edited.

8. Colossi AI is sometimes stupid. Some colossi have the attention span of a goldfish and you have to constantly shoot arrows at them to get their attention. I think they should have allowed them to be attracted to your whistles. Most colossi you want to attract don’t have Agro in the arena so I can’t see that being an issue. Taking your bow out and constantly shooting arrows at them is a shlep whereas you have one convenient button to call your horse and, possibly, alert colossi? There’s also a certain horse colossus that is the worst offender of derpy AI because you need luck for it to get into the right position to kill it.

9. Colossi can sometimes shoot through objects. There are a few colossi that can fire magical death balls and of those fought where there are places to hide behind I found myself getting hit a few times through the walls. As Jake said in Adventure Time: “It’s probably just a computer gleetch”.

10. Saving is misleading. When I was presented with a save option in the menu I thought “Great! Now I can save exactly where I am on the map and continue where I left off!” when in reality it meant you could save your progress but continue at the last shrine you visited and, if you didn’t, continue all the way back from the main tower. You need to switch off your PS4? Aw… Were you halfway to the 11th colossus but didn’t sit at any shrine along the way? Too bad, back to the very beginning you go.

Phew! I hope you enjoyed this list and feel free to agree or disagree or comment on your pet peeves and favorite elements of this remaster. Overall this remaster is a success. They kept the best parts of the original Shadow of the Colossus and made them even better. The graphics overhaul is insane and while some of the kinematics are finicky, nothing is ever perfect but this gets pretty damn close!

Megan here! I am pretty well versed in all things weaboo and geek. I've loved videogames since I was born and even made my own for my 3rd year of Multimedia at the University of Pretoria in sunny South Africa. I have enjoyed anime from the days when Pokemon was considered satanic and Aniplex used to exist on DSTV. In the past couple years I have really gotten into manga, particularly Berserk to see where the story headed after the original anime. If there's one thing I will always love 110% it is cats. Don't doubt my faith in my love for felines.
Previous The Amazing Spider-Man #800 variant cover round-up
Next EGX Rezzed 2018 Hands-On: Stay