Home / Comics / RASPUTIN: THE VOICE OF THE DRAGON #2 (Comic) Review

RASPUTIN: THE VOICE OF THE DRAGON #2 (Comic) Review

The Germans recruited Rasputin to the Third Reich. He has the resources, but what will he find? Learn more in RASPUTIN: THE VOICE OF THE DRAGON #2. 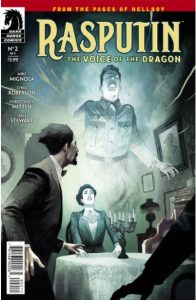 1941 Berlin. Rasputin digs over the many reports and scrolls at his disposal, but the information that he seeks will not so easily reveal itself. He works in solitude, until he is interrupted for an update on Operation Geist.
The men in the field are making progress, and Rasputin will now rendezvous with them in Paris. There was a Frenchman who came before, who had visions of Heaven’s Fire. This is at least in part, some of the knowledge Grigori Rasputin seeks.
In another part of the world, Professor Trevor Bruttenholm is sitting in a seance with family and friends. There was what seemed to be a reanimation taking place, however not everyone believes in such possibilities.

The seance brought about a spirit of a man that would lead Bruttenholm and his friends to Paris. the Reich were searching for something, though there were no indications as to what their target was.
The spirit they sought, as well as a few members in the seance were a part of the Heliopic Brotherhood of Ra, which has come up several times in the stories around Hellboy and the BPRD. The spirit they sought was raised to the rank of Secret Grand Master. It was believed that the spirit in question, Albert Mayhew, may know the location of the tomb of the Brotherhood’s founder, as apparently he was buried with several items of significance. As we are led to believe about seances, things did not go quite as planned, and Bruttenholm was left with more questions than answers.

In search of more answers, Bruttenholm visits Mayhew’s old home, which included quite an occult library. The contents of which would put even Trevor’s uncle to shame. While digging into the volumes, Bruttenholm finds something even he could never have expected.
What would follow was included a spell, an approaching automobile, and an inquiry. Though you will have to pick up a copy of the book for yourself if you want to know the rest.

Just when you think you have a handle on where these stories are going, Mignola has a way of tossing you out on your hat. That’s what keeps things interesting.

Seances, spirits, and Grigori Rasputin, why whatever could go wrong here? With Professor Bruttenholm on the case, we're sure to get to the bottom of things.

A fan of media on multiple platforms, I am always watching or playing something! Who knows what I will be on to next?
@mackeyp42
Previous Sideshow unveils new Thundercats statue line
Next BG’s Game of the Month for November 2017 is Doom (on the Switch)