Next year will bring about Infinity, a resurgence of the Infinity Stones. But that’s not all, as it will also spell the end of the Guardians of the Galaxy.

This March, Gerry Duggan (All-New Guardians of the Galaxy) and Aaron Kuder (All-New Guardians of the Galaxy) are bringing you a spectacular, huge Infinity tale that will lead to an even greater story – and one that will impact the entire Marvel Universe! The Infinity Stones, thought to be lost forever, have suddenly reappeared — bringing with them the ultimate power for good and evil. Three stones have fallen into the hands of the mightiest heroes in the galaxy…but where are the rest.

As the hunt for the stones begins, a new weapon of unimaginable power is being forged…and it’s a weapon like nothing the universe has ever seen! What is its purpose? And who – or what – is the destructive force that will be unleashed on the world? The race for power in the post Secret Wars universe has begun, and its search will impact every Marvel character from the street to the cosmos, from the Avengers to Spider-Man to the X-Men, even bringing about the end of the Guardians of the Galaxy! 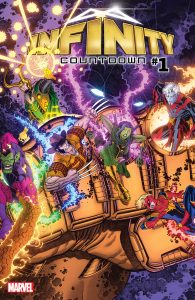 “As we worked on the Infinity Stones’ story, it became clear the story was much bigger than we could contain in the Guardians of the Galaxy series,” said editor Jordan D. White. “It starts with the Guardians, but the story extends out into the entire Marvel Universe, with stones popping up in some VERY surprising places. Countdown is the next step in the story…but as the name implies, it’s leading to something even greater.”

So that’s the tease for Infinity, and event that apparently grew well past its intended bounds. But Marvel has revealed a little more than just the above, and it actually sounds pretty neat.

Infinity will actually reveal the origins of the Stones themselves. And apparently it’s going to be pretty massive too, as it’ll have world-ending themes, be “earth-shattering”, and -you guessed it- “will change the Marvel Universe forever.”

Things start off with February’s Infinity Countdown Prime #1 by Gerry Duggan and Mike Deodato. That’s going to be an issue that you won’t want to miss too, since it’ll reveal the locations of all six Stones, and that “origin” I mentioned.

Infinity Countdown #1 (note the absence of “Prime”) lands after that in March, kicking off a five-part mini-series. Then it’s on to Infinity itself, but that’s still a ways off apparently since Marvel isn’t really talking about it just yet.

Jason's been knee deep in videogames since he was but a lad. Cutting his teeth on the pixely glory that was the Atari 2600, he's been hack'n'slashing and shoot'em'uping ever since. Mainly an FPS and action guy, Jason enjoys the occasional well crafted title from every genre.
@jason_tas
Previous December 20th Valiant Comics previews: Quantum & Woody & Ninjak
Next The Wonderful World of Perfecto (comic) Review