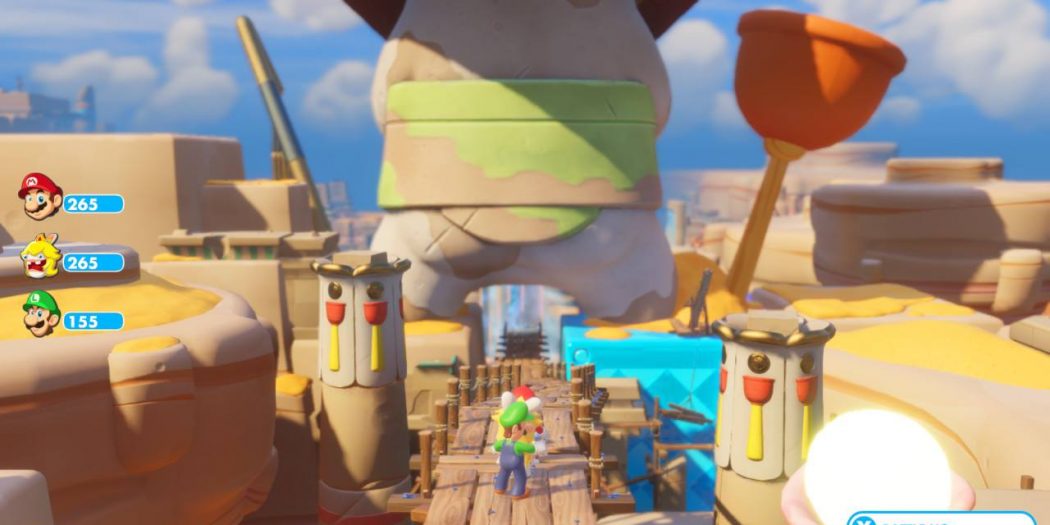 Collision, and collusion, are the heart of Mario + Rabbids: Kingdom Battle. They inform design from every angle.  Weapons mash up traditional Mario iconography with fire arms.  Enemies take Mushroom Kingdom delinquents and combine them with the nefarious Rabbids.  Some of stages themselves take disparate elements and shove them together. The Sherbet Desert is a perfect example, where scorching desert meets frigid icebergs, but even the opening Ancient Gardens brings a natural grassland and combines it with the unnatural- enormous children’s building blocks. 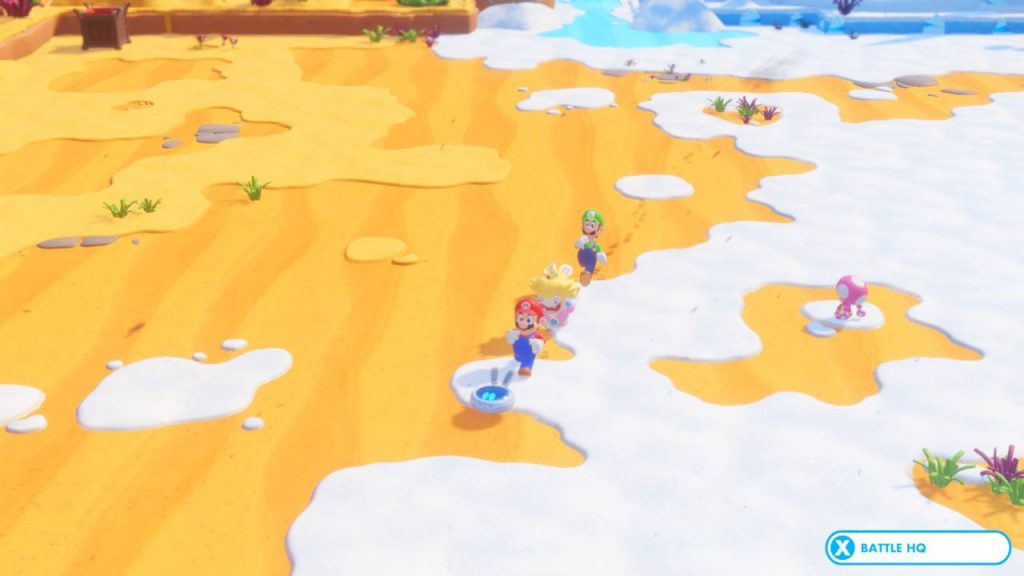 The story’s own Spawny is equipped with a headset that makes this all possible, the narrative element that shoved Mario and Rabbids together (thank you very much).  Every time you see him, he’s plugging one thing into another and forcing two objects to be one, creating enemies, obstacles, and surprises at every turn.

The game’s humor is no different- much of the fun comes from seeing how the straight-laced Mario interacts with the spastic Rabbids, including a jealous Peach Rabbid and a self-important Mario Rabbid.  Seeing Mario characters struggle, patiently, with their Rabbid doppelgangers is worth a laugh at every pass.  Of course, the Rabbids all around the four worlds, who reward watchful eyes, engage in tomfoolery that can entertain the juvenile and the adult, thanks to fantastic animation and adherence to fun.  Visual humor comes in abundance, and constantly led me to read a little bit slower, just to catch Luigi trying to peek at Peach Rabbid’s guarded selfies. There’s almost always something going on worth a chuckle or two, and often genuine laughter. 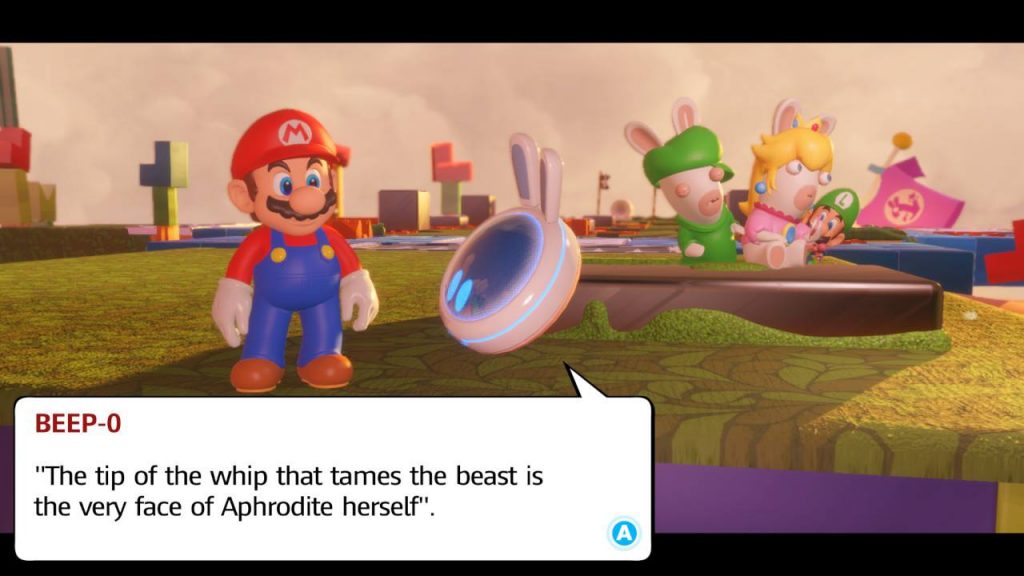 Grant Kirkhope delivers a nostalgic soundtrack that takes Mario tunes we all know, and attacks them with Rabbids until the end result is something unique- a sometimes familiar, but never unpleasant (except on the opening menu), collision. The music is at its best when it works in tandem with the stage (the third world’s background vines pluck harps in time to the music, and its boss is an opera to remember), and always matches the mood.

It’s hard to say whether the presentation or the gameplay is more impressive.  Mario + Rabbids: Kingdom Battle is a strategy RPG with puzzle-solving and exploration both in and out of combat.  The battles are grid-based and place an emphasis on positioning.  Cover can prevent damage entirely as long as it’s between you and your foes, and keeping it in place can be a challenge, especially when Rabbids start bouncing off of each other to cross chasms and cover the map.  You’ll need to count every square (which takes a bit of getting used to: moving diagonally still only counts as one) so that you can prepare, often turns in advance, in order to take advantage of running attacks, team jumps, area of effect support skills, mad dashes from cover to cover, enemy range, enemy movement, and more.  Different cover types (such as easily broken ice blocks that will leave you standing in the open), weather effects (such as sweeping tornadoes that will send your characters out of bounds), enemy combinations (advancing melee Smashers are a little more intimidating when a Buckler has locked you into place), and special damage types (that can leave you unable to move, attack, or use skills) mean there’s a lot to keep track of every time you examine the map and rewrite your battle plan.  Fortunately, if something goes awry, a restart of a battle is just a couple button presses away, meaning you can quickly take your newfound knowledge and approach each stage as a master.  Battles are often relatively short, too (averaging about four or five turns each, in the early levels), and you do have the option of picking easy mode every map, healing up your party and starting with more max health. 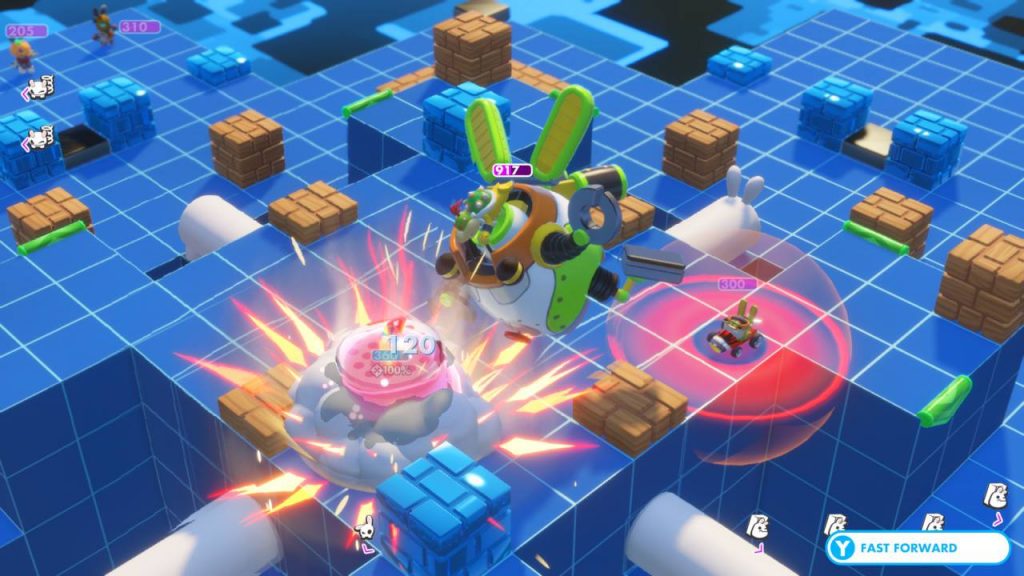 Battles span multiple objective types.  Some task you with simply defeating all the enemies.  Others will send you scurrying for a finish line.  You may have to escort a Toad or two.  Different cover layouts and enemy type combinations change the necessary strategy each time, ensuring the last maps are as fresh as the first.

And if you are being worn out by the sometimes demanding missions, puzzle-solving will arrive at the opportune time to alleviate the stress.  Flipping switches and pushing blocks aren’t novel, but they’re executed intelligently here.  Beep-O, the roomba without a vacuum that you control, will unlock abilities as you progress to help you interact with the world in different ways, including places you’ve visited before.

Challenge Missions and hidden collectibles will also send you back through the four worlds in your hunt for 100% (if that’s your style), adding to the game’s approximately 20 hours run time. 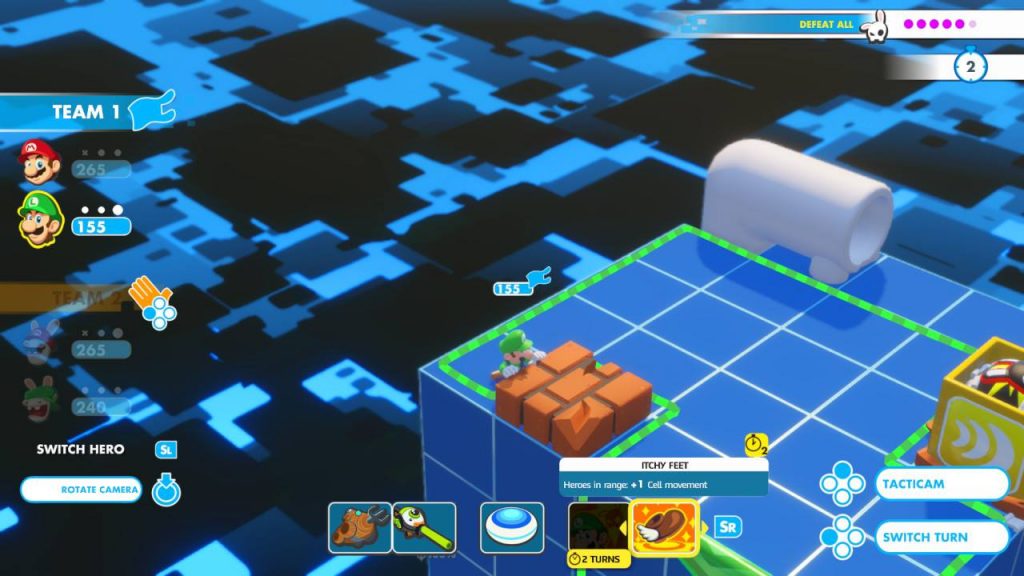 For more distractions, there’s even a co-op mode that pits you and a friend against several maps, giving both players control over two characters.  The characters and stages, of course, have to be unlocked via single-player progress, so don’t expect to marathon it with a buddy unless you’ve already done the legwork.  Weapon purchases and skill-tree progress also carry over, so be sure to keep your friend’s favorite characters in mind when you’re stocking up in the campaign.

Those skill trees are a highlight of Mario + Rabbids: Kingdom Battle, due to the staggering amount of player choice.  With no cost, players can completely reset any character’s skill tree.  If you need to reach the end goal on a stage, pump all of your points into movement, and you’ll soon leave the whole thing behind.  If you’re fighting in close corridors, then you may instead want to invest those points into your characters’ defensive skills and dash attack damage and effects.  You can always pick the right build of skills and party members for every type of battle.  Though I found myself largely sticking with Mario (a requirement, and not just because he’s good), Rabbid Peach (a supporting pro who also fills the second requirement: every party must have at least one Rabbid), and Luigi (a long range attacker) in the beginning of the game, by the fourth world, I was picking my characters for specific scenarios.  Peach and Rabbid Peach would help me escort, while Rabbid Mario would take me to the ends of the earth with his focus on movement and survivability.

He didn’t always make it through. 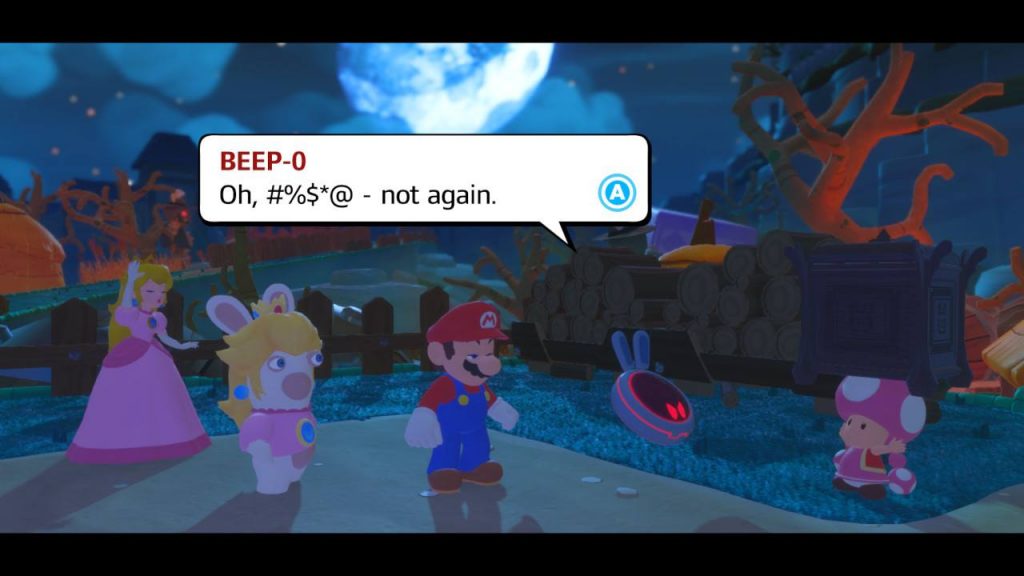 The culmination of two franchises in any medium rarely works as well as it does here (or at all, frankly).  Mario + Rabbids: Kingdom Battle is the real deal: a strategy RPG that will test and challenge your creativity and your ability to adapt. The visual design and bombastic humor are spot on, and no pieces fall short of the package’s heights. Switch owners owe it to themselves to play Mario + Rabbids: Kingdom Battle.

Mario + Rabbids: Kingdom Battle is a fantastic strategy outing from Ubisoft that is just what the Switch is looking for.

Brutal Gamer's Nintendo Editor began his gaming life a little late- at five years old. But he's made up for it in the two decades since, gaming and writing about gaming with the same passion, fervor, and unrelenting love as his five-year old self.
Previous My Hero Academia Season 3 announced
Next PS Plus: Free Games Lineup for October 2017