Home / Comics / Hellboy Omnibuses on the way from Dark Horse

Hellboy Omnibuses on the way from Dark Horse

Seen the pic of Hellboy from the new movie and need to catch up on the character ASAP? Then you’re going to please as punch with Dark Horse’s latest announcement.

Hellboy is no stranger to collected editions. Actually, that’s how I first got introduced to creator Mike Mignola’s universe of creepy, crawly things. Needless to say, if you’re a new fan, then there’s no better way to acquaint yourself with a comic book hero (or whatever) than picking up a collection of his or her stories. And that’s just what we have here.

Dark Horse has announced this week, that a set of six Hellboy Omnibuses is on the way for 2018. These books will bring together “every Hellboy story written and illustrated by Mignola”.

But that’s not all, as it’ll also showcase The Wild Hunt.

No, I don’t mean the latest Witcher game, I mean the very story that’s spurred the upcoming rebooted film series. Originally, this tale was part two of a trilogy of arcs, and involves the end of the world. That’s something that should have Hellboy fans wondering just how big this new movie deal is set to be.

Whatever happens there though, the books themselves are being brought together for the first time here, in a collection.

“I’m very excited to finally have all the Hellboy stories collected in chronological order,” said Mike Mignola. “And I’m especially excited to have the three Duncan Fegredo books—all the stuff with Alice and the Queen of Blood—together in one collection for the first time.” 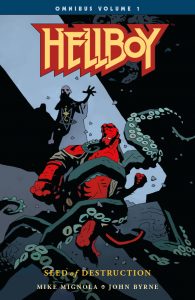 Here’s how the schedule shakes out:

Jason's been knee deep in videogames since he was but a lad. Cutting his teeth on the pixely glory that was the Atari 2600, he's been hack'n'slashing and shoot'em'uping ever since. Mainly an FPS and action guy, Jason enjoys the occasional well crafted title from every genre.
@jason_tas
Previous Nintendo Download: The Galaxy is NOT at peace…
Next Dragon’s Crown manga coming from Udon