A special variant of DST’s Doctor Strange statue will be making its way to NYCC next month. In astral form of course.

One of the more impressive Marvel movies to hit in recent years, Doctor Strange made quite an impact. Aside from bringing the mage to the big screen for the first time, it also looks like it may have renewed interest in collectibles featuring the sorcerer supreme.

The comic version of the character will be joining Diamond Select Toys’ Gallery series of statues, and will be getting a very cool looking exclusive for NYCC. The special edition will only be available at the DST booth on the show floor (#1644).

So what makes it so special? It is cast in blue translucent PVC, to mimic the character’s “astral” form. That’s a fancy way of saying it looks really cool. The Doctor will be packed in the standard Marvel Gallery full-color window box, and will stand in at about 12″ tall.

I’m honestly not even really a Strange fan, and I like this a ton. So you know the drill, if you want one, get to the booth early.

By the hoary hosts of Hoggoth- a panel too! 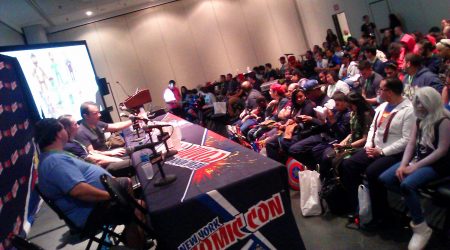 Yes, in addition to the exclusive, DST will have a panel presentation at NYCC as well. Taking place on Friday night (8 to 9pm in room 1A05), the panel will be hosted by “product manager Robert Yee and sculptors Jean St. Jean and Eli Livingston”.

What will the trio be discussing? Cool stuff. You know, the usual. Fans should expect talk in such topics as what’s coming up in the next few months, as well as a question and answer period. So plenty there to keep your Eye of Agamotto wide open for.

Jason's been knee deep in videogames since he was but a lad. Cutting his teeth on the pixely glory that was the Atari 2600, he's been hack'n'slashing and shoot'em'uping ever since. Mainly an FPS and action guy, Jason enjoys the occasional well crafted title from every genre.
@jason_tas
Previous Warner Bros and DC Comics’ Shazam movie enters pre-production
Next September 13th Valiant Preview: Ninjak #0