Sonic Forces finally gets a launch date and a “bonus edition”

Sonic the Hedgehog’s second big launch of 2017 is almost here, as Sonic Forces will hit before the Holidays. There’s even a neat Bonus Edition to be had.

Pre-orders are live now, and Sonic Forces is coming along nicely. The game, which is set to hit the Xbox One, PS4, PC, and Nintendo Switch, is set to deliver the second helping of the Sega mascot this year.

If you haven’t played Sonic Mania yet, you should. Forces is a different ‘hog altogether though, and is more akin to the (also excellent) Sonic Generations. So really, it’s quite a good time to be a Sonic fan. There’s something that you couldn’t say with a straight face for a few years. 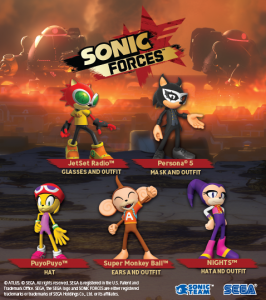 And should you pre-order the game at retail, you’re in for a special treat. Sega will be releasing a Bonus Edition that will be a physical-copy exclusive.

Switch, PS4, and Xbox One physical pre-orders are live right now, and will hit on November 7th. If, for some reason, you like to pre-order your digital copies though, you’ll have a bit longer to wait till you can pony up.

Digital versions, for all platforms (including PC), currently have no pre-order date. Though Sega says that will change. So, watch for that I guess.

Jason's been knee deep in videogames since he was but a lad. Cutting his teeth on the pixely glory that was the Atari 2600, he's been hack'n'slashing and shoot'em'uping ever since. Mainly an FPS and action guy, Jason enjoys the occasional well crafted title from every genre.
@jason_tas
Previous Harbinger Renegade #7 (Comics) Preview
Next Capcom’s Puzzle Fighter returns as mobile game