The Art of Rick And Morty (Book) Review

It’s an awesome art book which features a perfect balance of interesting tidbits and double-spreaded art. It has a writing style that is sprinkled with the humor of Justin Roiland himself and so many background factoids. If you are looking for some sweet Rick And Morty swag look no further than this glow-in-the-dark book that will have your eye holes drooling.

The artworks featured here are as clean and crazy as ever. Each visual facet of the show is featured. Characters, backgrounds, weapons, mutants, aliens, production etc. You want a plumbus? There’s a plumbus. There’s even cut content and ideas from the show! All of which are vibrant and detailed!

There are pre-production notes about the pilot and references that are used by artists when drawing characters as well. You’ll even find expression sheets and poses for many characters, as well as the props for just about all the episodes.

Same with the backgrounds. You’ll find what the inspirations were for everything, and the reasons behind certain design choices. A surprising fact is that some voice actors gave so much depth to their characters that their characters got bigger roles in the show.

Rick’s Microverse (“The Ricks Must Be Crazy”) and Interdimensional Cable (“Rixty Minutes” and “Interdimensional Cable 2: Tempting Fate”) get a lot of page-room considering the episodes needed a LOT of effort put in. Many sections are devoted to the backdrops and characters of these 2 episodes including the surprisingly difficult design process of one character who lives in the Miniverse. 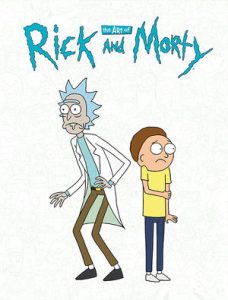 This book is written hilariously! The foreward by Justin Roiland is one of the best and funniest I’ve read. Each of the sections have commentary written about them in a Rick And Morty-ish fashion which often lead to me chuckling.

Even pre-production notes about how to draw characters made me laugh. Remember: Morty needs to have the hands of an 8 year old girl! The small pieces of information about the art keeps the pacing to a steady rhythm. There’s enough to read without it being boring or feeling too short, and enough art to look at to keep you staring at a page for a solid 5 minutes.

From the newborn concepts to the finished product, you will find so many sketches, scripts and artworks that drive everything. From backgrounds, characters, weapons, technology and stories to the production order itself.

I was quite happy to see that The Art of Rick And Morty tackled the “behind-the-scenes” so well too. Bardel Entertainment is the animation studio behind Rick And Morty if you didn’t know. They seem like experts in their field, and yet I’ve never heard of them before.

Justin creates the YES/NO guidelines for characters and backgrounds that artists follow. The artists then create keyposes which are sent to Bardel and animated using their Harmony animation software. You can read more about the finer details in the book!

The Art of Rick And Morty is a generous art book, managing to squeeze in so much stuff that you can take a good number of hours reading it and ogling over all the little details. The book gives you a greater appreciation for the show. It shows how much the artists get passionate about Rick And Morty whether it is designing backgrounds that feature for a nanosecond or alien races you’ll see only once. It also has a drawing of a penis on a production board in it. Ain’t that something?

Megan here! I am pretty well versed in all things weaboo and geek. I've loved videogames since I was born and even made my own for my 3rd year of Multimedia at the University of Pretoria in sunny South Africa. I have enjoyed anime from the days when Pokemon was considered satanic and Aniplex used to exist on DSTV. In the past couple years I have really gotten into manga, particularly Berserk to see where the story headed after the original anime. If there's one thing I will always love 110% it is cats. Don't doubt my faith in my love for felines.
Previous BG Unboxed: August 2017’s Loot Crate is a Kingdom of goodies
Next Nintendo Download: Mario Meets the Rabbids