Everybody knows Sonic as the mascot for the Sega Genesis, but did you know that he graced Sega’s portable as well? As you can imagine, it’s a completely different game.

Sonic the Hedgehog was everywhere in the early 90s. He was a fresh face, in an area of gaming that really had few other members outside of the Nintendo stable. I’m talking about mascots. And before Sonic became theirs, Sega didn’t have a single one. Well, unless you count that guy from Altered Beast, and you shouldn’t.

Sonic’s first outing on the Genesis was a revelation. Platformers didn’t all have to play the same, and Sonic was all about speed, and a choose-your-own-way type of experience. Check out our review of Sonic the Hedgehog 2 to read more about that. And I recommend doing that, ’cause it isn’t what we’ll be talking about here.

Nope, Sonic the Hedgehog on the Game Gear might look similar, but it doesn’t play the same as its Genesis sibling. As you’ll see, that’s both bad, and actually kind of cool. 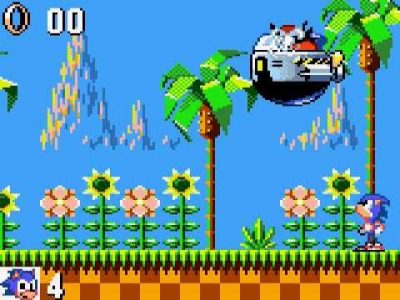 First, remember that the Game Gear is an 8bit console, while the Genesis was a 16bitter. Honestly, there’s a big difference between the two, even though the Game Gear did manage to make its library look quite nice at times.

So you have to keep that in mind when approaching Sonic on the GG. It just flat out doesn’t play like the Genesis version. Not completely anyway. You’ll find some stretches where you can get some nice speed going, sure. But it’s not the whole game. In fact, you can pretty much forget Sonic’s impressive zipping through levels. The GG version isn’t going to give you that.

What you get instead, is a game that plays a little slower, and a little more like other platformers. No, it’s still not Mario, but Sonic on the Gear requires you to explore levels a little more.

Chaos Emeralds are a big part of that, since they’re not in bonus games at stage endings here. Instead they’re placed within the stages themselves, and you have to find them. You’ll also want to pace yourself as you go, since Sonic can’t re-collect lost rings when you’re hit by an enemy.

And that means that you might run into some unusually tough situations… for a Sonic adventure anyway. Personally, I got stuck for way too long on a boss. Not fun. Definitely challenging, more challenging than I usually find Sonic, but not what I’d call fun.

Honestly the sound isn’t that bad here. That might seem nutty to say, but it’s not. The tunes are solid enough, and the sound effects are very passable indeed. Not bad at all. 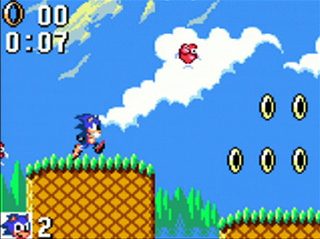 As for the graphics, they’re not the Genesis.

I don’t really mean that as a condemnation either, as the looks here are likewise very passable. But if you’re used to the Genesis’ sharp 16bit output, then you might be disappointed by what the Game Gear manages. Then again, you might not.

When played on the small screen of the handheld, Sonic looks good enough. He’s also a lot larger of a sprite than he usually is, which is kind of neat. Maps in Sonic the Hedgehog on the GG don’t have the scope that they do on the Genesis. The window into that world is a lot smaller too, with the blue blur taking up more of the viewable screen. It’s not something that I’d like at home, but it works here.

On the levels though, they’re much simpler, and as I implied don’t have the oomph of the Genesis games. So the end result is that they aren’t as interesting. Not bad really, just not anything special.

Baddies look almost as cool as they normally do though, which is great.

One thing that I found as solid as Sonic usually is, is the control. The Game Gear’s pad and simple control scheme work very well for the game. And I found hoping around and executing attacks easy as pie.

A note on that though, is that there really isn’t much to actually do in Sonic. Remember that this is an adaptation of the very first game. Controls are basically jump and… jump. There are no homing-attacks or anything like that, so don’t expect anything more than a bare-bones Sonic platformer. And one that runs a little slower than you might be used to.

Terrific graphics and sound, for what they are - 75%

Limited scope and no feeling of Sonic-speed - 50%

It's tough to say too many bad things about Sonic the Hedgehog on Game Gear. It's still Sonic after all, and even a watered down version of that classic is -honestly- tons of fun. Still, I have to admit that this one misses the mark on too many of the things that made the classic series so enjoyable. And for that, I can't tag it with too high of a rating. But if you're stuck looking for something play for your old GG, you could do a LOT worse.

Jason's been knee deep in videogames since he was but a lad. Cutting his teeth on the pixely glory that was the Atari 2600, he's been hack'n'slashing and shoot'em'uping ever since. Mainly an FPS and action guy, Jason enjoys the occasional well crafted title from every genre.
@jason_tas
Previous No Man’s Sky: Atlas Rises on PS4 and PC
Next Make This Game: Bioshock City Builder