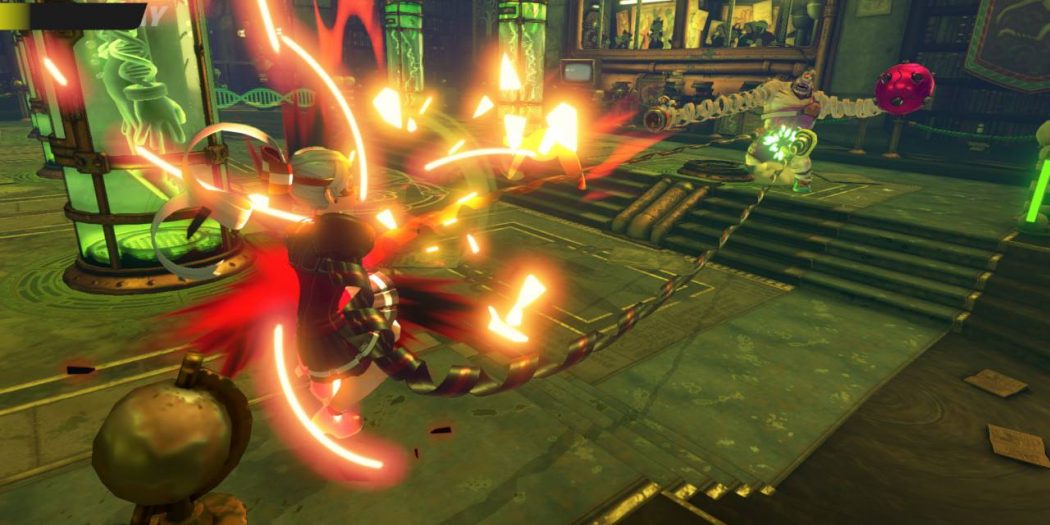 The Fighting Game genre has been distilled successfully into a fast, intelligent game in Arms for the Nintendo Switch.

Arms may not be immediately related to its fighting game staple cousins, and while its just as easy to suggest that it eschews tenants of the genre that have become fundamental, and is only better for it, its hard to deny that it is, at the end of the day, one of them: a competitive face-off that tests skill and tenacity in equal measure.

Arms features a cast of characters whose arms are stretchy for different reasons- coiled springs, ribbons, bandages, and hair among them. And each is designed with a level of personality that is hard to ignore.

The aesthetic of the game as a whole is inspired, yet unique. It’s not just the likes of fighters like Min-min, who sports ramen hair and arms under an over-turned bowl beanie, but the fans that surround the stages as well, wearing paraphernalia related to their favorite contestants, who give life to the world and the sport around which its built.  Everything from the interface to the rinks is clean and colorful, and easy to understand at a glance. 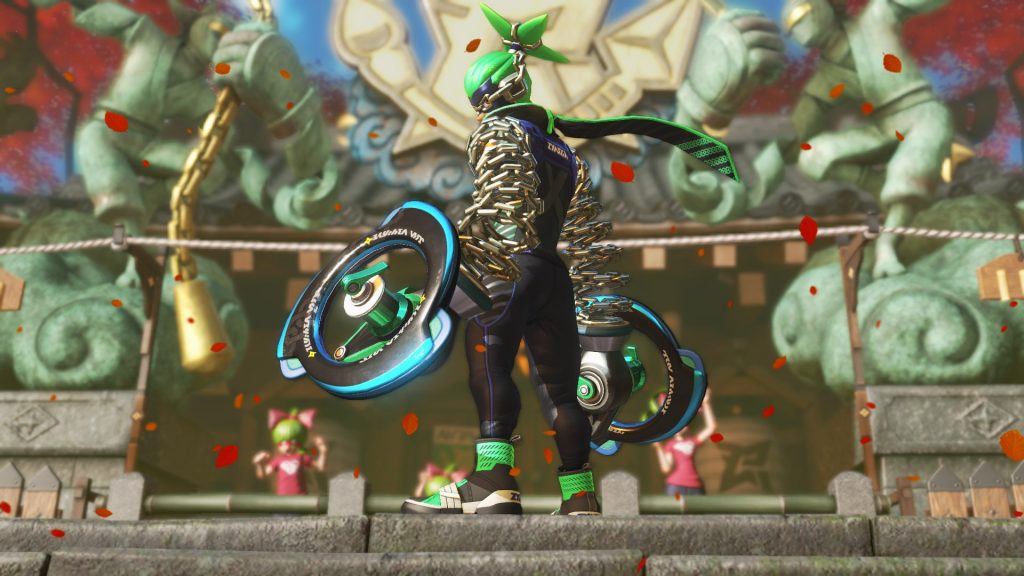 One of Arms greatest strengths is its simplicity, and it’s also one of the things that separates it from the competitive fighters that bring millions of views in during events like Evo.

There are no combo strings or complicated inputs. From character to character, and even arm to arm, the controls don’t change. It should be mentioned that they do however, if you change your controller. Arms supports everything from a single-joycon to a pro-controller.

With motion controls, you punch to punch, point your arms inwards to block, and move by tilting the joycons where you want to go. Without even hitting a button, you can avoid punches, block barrages, and dish out a beat-down.

Including grabs, the motion elements aren’t just simple to execute- they match intuitively what’s happening on the screen. The behind the back perspective and matching right and left hands leave no room for confusion.

While punching with both hands may not seem a sensible input for a game like Street Fighter, in Arms, a grab is literally both arms darting forward, with a green net between them. Without knowing the command, you can guess based on visual cues.

Jumping, dodging, and supers are put onto buttons, but even then your options are limited (by virtue of the thumbs up pose) and new players won’t be fumbling with face buttons. Pass out the joycons, and by the end of the first match, everyone will understand the basics. 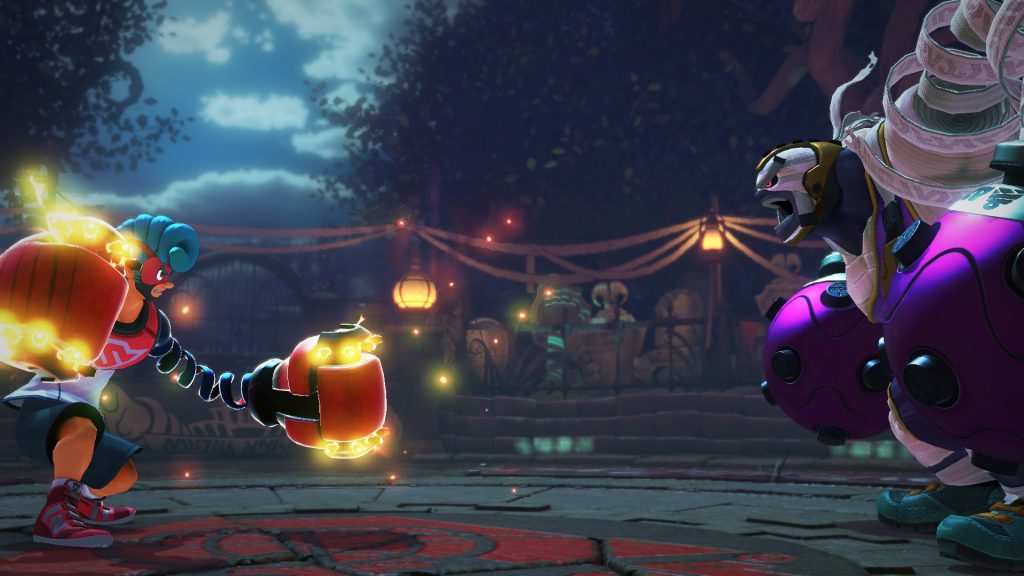 Basics are easily understandable in most games, of course. What makes Arms unique is that even the advanced mechanics are simple.  Every character has one or two understandable flairs that set them apart.

The aforementioned Min-min, for example, can execute a midair kick to knock back attacks, giving her a window to counter-attack. She also can power up one of her noodle arms into a dragon. That greatly increases its offensive presence until she’s knocked down.

Spring Man, meanwhile, can knock away attacks when charging. And when he reaches low health, all of his attacks are charged automatically. It only takes a little bit to set each fighter drastically apart. While proper counters will surely grow more obvious with time, in my time with the game, no match up seemed handicapped.

Customizable arms further let players adapt and adjust until their play-style is well-matched.

Heavier, slow moving arms are both offensively immovable and defensively effective. But their slow movement can be a hindrance against mobile opponents. Homing arms can be helpful, but the loss of precise control makes you more predictable. Some arms can curve around obstacles. Some hit wider areas of affect, vertically or horizontally. They run the gamut from offensive to defensive, and everything in between and on the outside.

Bringing the right arms for each situation (you can pick from a set of three for every match, but you’re limited to only those three for each set), and learning how to utilize their and your character’s unique traits will set you apart from the players who are just starting.

Arms does not have a low skill ceiling, no matter what its simplicity might suggest. At the end of the day, players are still using the same tool-set, just as they do in more traditional fighting games. Its just that the tool-set is simple, understandable.

The ability to control spacing, to read your opponent’s every action, to balance defense and offense, to bob and weave are all vital to competing against the best (ie, players who’ve passed the prerequisite to ranked play).

It takes just as much dedication to be the best. It just takes a lot less time to feel like it.

And Eat It, Too 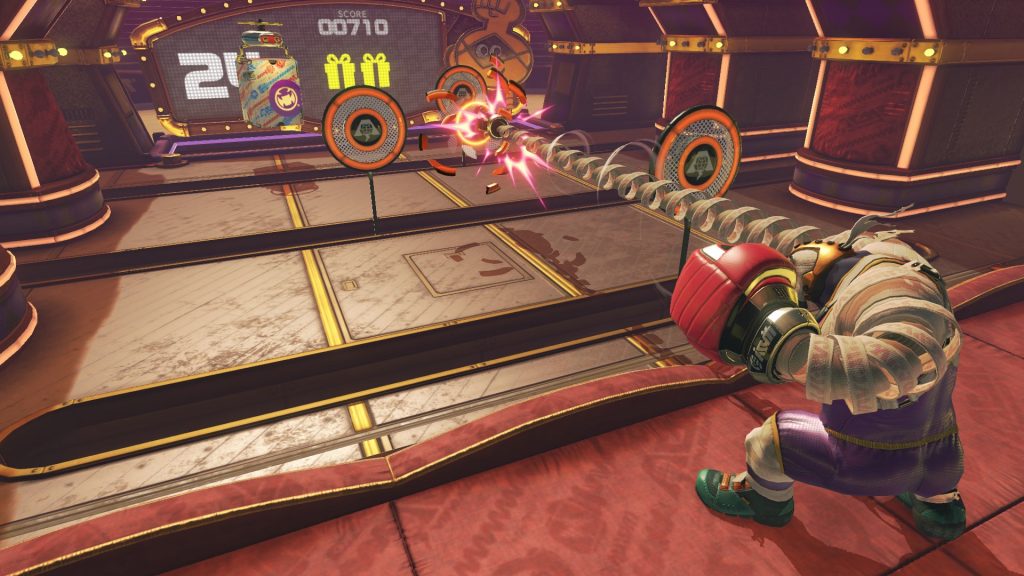 Arms isn’t just a competitive sport.  It’s a party, too, with modes to match. Typical one versus one matches are the highlight, but Arms lobbies also consist of V-ball (a mode wherein players keep a bomb off their side of the net), Basketball (where only grabs give players points, and grabs are turned into dunks), Skill Shot (where players face off with point-giving clusters of targets between them), two versus two (players are frustratingly tethered together, limiting movement and options, but opening up different kinds of strategies), Free for all (where the player who keeps himself out of sight and out of mind will find victory most often), and even a co-operative 3v1 fight against Headlock, the game’s final boss.

In online lobbies, players can be thrown into any and all of the aforementioned modes. You can even bring a local buddy too. One minute, you might be teamed up with another player in a tense two versus two, and the next you’ll find yourself dueling to the death in a one versus one.

Even if you want to continue to face-off against that player, you may find yourself moved next into a cooperative bossfight with three other players. Meanwhile, your new rival is placed into a V-ball match with some newcomers. It has its advantages- creating a party-like atmosphere where anything can happen, and always will- and disadvantages (some of the other modes do lose their luster). 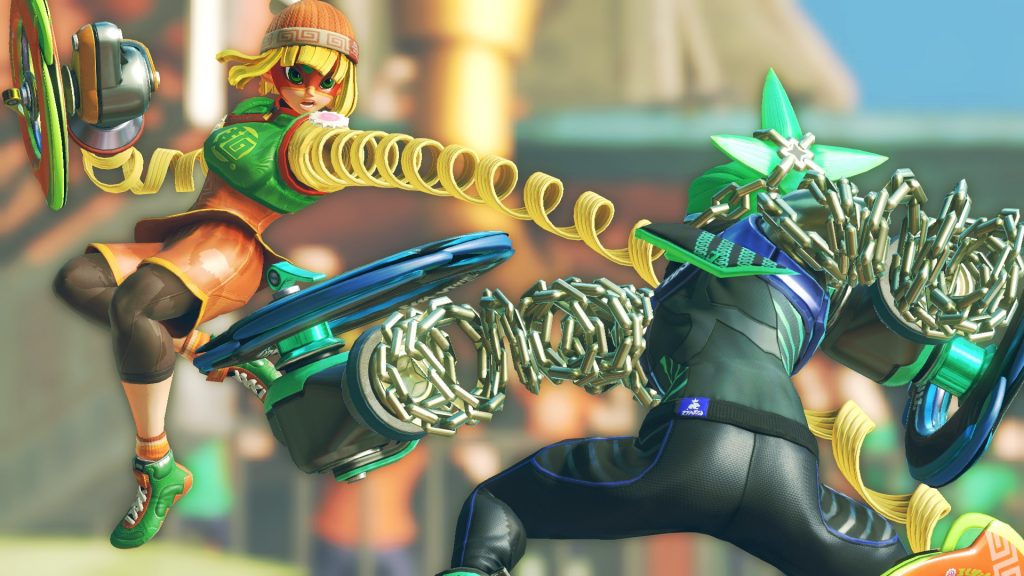 Playing against bots is an option, offline. Grand Prix, whether as a single-player or with a local partner, is a quick barrage of ten bouts, most simple fights, some V-Ball or Skill Shot.  Difficulty can be set, and more money can be earned by higher numbers.

Perfects give players extra cash (which can be spent on new Arms- all characters are unlocked from the top). So sometimes the easier route can be more lucrative.  The biggest reward, early on, is beating the Grand Prix on a difficulty of 4 or above. That gives players access to Ranked Battles.

You’ll have to understand the mechanics of the game before doing so, but the ability to try a battle as many times as you want without penalty (and even stop and save in the middle of a Grand Prix) make it a surmountable task. That’s true even for less experienced players. Tenacity and miracles can always trump AI, after all. Rank 4 or above Grand Prix also end with a battle against Headlock, which rewards a hearty chunk of change.

A practice mode is included as well, as this is a fighting game. Players can pick what skillset they want to practice, and fight against AI opponents with a focus. It’s not a bad place to practice your basics, if Grand Prix’s fourth difficulty or the human players online are constantly getting the better of you.

Arms is a complete fighting game. Even so though, the developers are releasing free content (starting with Max Brass, a new playable character who already shows up in Grand Prix) for players to enjoy in the future, to ensure the knockout. If the quality and timing are as spot on as Splatoon’s season, then players will be on Arms for some time to come.

Whether you’re hoping for a party brawl or an intense face-down, Arms has got you covered with its gamut of modes and ways to play.  The motion inputs amplify player control. And like Splatoon before it, players who opt for a traditional set-up will be doing themselves a disservice.

That is, so long as they can get used to moving their wrists in sometimes uncomfortable ways. Arms maintains a moment-to-moment intensity where players on their back foot can always come back if they play a smarter, better game than their opponent. And that’s what will give it staying power. Simplicity, intensity: Arms has it all.

Arms is a fantastically unique fighting game, without the pieces that make fighting games unapproachable for new players. A colorful style and wicked character designs push the wacky ideas to their limits, and all of it comes together for a proper package.

Brutal Gamer's Nintendo Editor began his gaming life a little late- at five years old. But he's made up for it in the two decades since, gaming and writing about gaming with the same passion, fervor, and unrelenting love as his five-year old self.
Previous Cuphead officially not coming to PS4
Next SDCC 2017: Entertainment Earth unveils Super Mario exclusive