It looks like we are in for it again: This morning, Nintendo announced the next mini console it will produce: the Super Nintendo Classic edition. 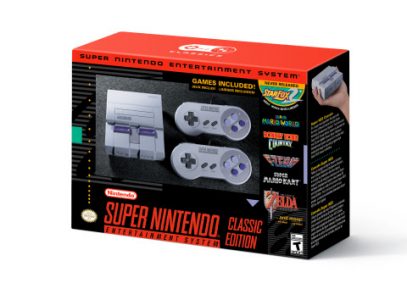 The all-in-one box is a familiar concept if you’re aware of what Nintendo and other old school publishers have been up to in recent years. The console will come with 21 pre-loaded games, including classics like Donkey Kong Country, Earthbound and an all new, never released Star Fox 2!

If you already played these games and you find yourself scoffing at the $79.99 price tag, here is a kicker: one of the games, Star Fox 2, has never been released before. You will be able to access it in this collection by beating the first level of the original Star Fox.

This console also comes bundled with two controllers, making sure games like Street Fighter 2, Super Mario Kart and F-Zero are playable in multiplayer right out of the box.

For set up, it looks similar to the original NES classic: just plug it in and play. The controllers are still wired: hopefully, they will be longer than two feet this time.

I know for sure I will be picking one of these up, assuming there is a proper supply.

The full list of games included on the SNES Classic follows:

Erich was introduced to gaming by his grandfather before he could walk. Since then, he has grown up loving Nintendo and most games in general. He couples his love of videogames with journalism to cover news, provide reviews and tell it how it is in the gaming world.
Previous Chrono Crusade The Complete Series Episode Three: ‘The Servants’ (Anime Recap/Review)
Next Bankshot #1 (comic) Review