The third and final numbered installment of the classic Teenage Mutant Ninja Turtles NES series is another fun outing for the franchise.

A pop-culture phenomenon in the 80s, the Teenage Mutant Ninja Turtles were an easy fit for gaming. At the time, that basically meant an appearance on the NES.

The first installment of the soon-to-be series came in the form of a game that was, well a little odd. The TMNT were there in all their glory, and so were characters like Splinter and Shredder. Thing was though, the game itself didn’t have the greatest level of adherence to the property. The Turtles visited stages that had such non-staples as ‘chainsaw maniacs’ after all. Not exactly fitting with the cartoon. Though I do have to admit, it was an extremely fun time (though brutally hard).

TMNT 2 on the other hand, had everything and anything that a fan could have wanted. That was because it was a port of the arcade game. With some minor alterations, and a major hit to the graphics, it performed very well indeed.

And the third entry? Well that’d be The Manhattan Project. Probably the toughest cart to find out there of the three at present, TMNT 3 featured basically the same look as the Arcade Game, but with an original story. 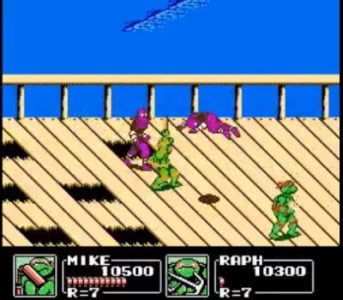 In it, the Turtles go on vacation in Florida (’cause why not), and Shredder somehow manages to turn NYC into a floating fortress while they’re out. Their mission, of course, is to make their way back to the Big Apple and beat the baddies in charge.

If you’ve played the Arcade Game, then you know what to expect here. That’s not to say that there’s nothing new though, as TMNT 3 does make a few additions. At its core though, the game plays almost identically to it’s predecessor.

Using the NES pad, your chosen Turtle (all four are playable) can jump and attack. You can also do a jump kick, and a special move that leeches a little life by pressing both at the same time. In addition, pressing down plus attack does a throw – which is SUPER IMPORTANT.

See, Foot Soldiers in this game have a very set and patterned approach to attacking you. They basically surround you. With the throw, you can pick up the one in front of you and toss him onto the one behind you. With only a few strikes needed to take out each one, this move becomes as commonplace during play as your standard attack.

In addition to regular play, you’ll also run into some vehicular play. It’s nothing too complex, and more or less plays exactly the same as the on foot portions. Oh, and I should also tack on that you can indeed play two-player co-op.

A Technodrome full of detail

One really nice thing about this game is that it is loaded with cartoon and comic book details. More so than even the Arcade Game. You’ll get your Rocksteady and Bebop sure, but you’ll also find the likes of Slash and even Ground Chuck. He’s a mutant/cyborg bull by the way, and as far as I know he’s only been an action figure. Now that’s a nice mix of the popular and the niche. 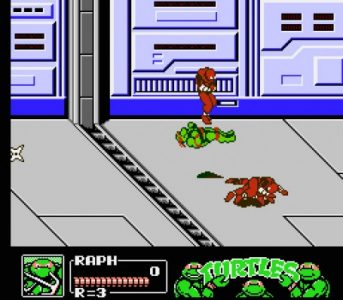 What’s not in the game? The Triceratons. The warlike, dinosaur alien race from the comics and the new cartoon show are right there on the cover too, but they’re nowhere to be found in the campaign. I have to admit that as a kid I was more than a little upset over that. I really dug those guys.

It might seem like a strange thing, that they’re not in there, but it’s kind of fitting. The box art for the original TMNT featured a comic book image, that didn’t really represent the game itself either. So it was tradition I guess.

Overall though, I’ll say that the graphics are pretty terrific here. Yes, there’s a good deal of flicker when things get crazy, but it’s not unplayable. And I also didn’t notice much slowdown in my play through, something that a lot of NES games suffered from.

As for the music and sound effects… meh. The tunes are okay, and the effects are decent enough. I feel pretty comfortable saying that you won’t really find them to be all that great however. Not that you should care, since the game is still plenty fun.

It isn’t easy though, so don’t expect a cakewalk. This might not have the blistering difficulty of the original NES Turtles game, but you won’t breeze through in a few minutes. Well, probably not anyway. Fortunately, even with the monotony of throwing every other baddie that you face off against, the game’s a good time. Especially if you’re a fan of the TMNT, you probably won’t mind giving it another go when you’re shell-shocked.

TMNT 3: The Manhattan Project is almost a "lost" Turtles game. It apparently wasn't even release in the UK! It's worth digging up though, if you love the classic cartoon series or the old Archie-branded comics. There are tons of nods to all of that throughout, and some solid controls and graphics backing it up. Yes, the gameplay does get a little boring. I can't sugarcoat that, but it's still a tubular time overall and should make for a fun afternoon for any fan.

Jason's been knee deep in videogames since he was but a lad. Cutting his teeth on the pixely glory that was the Atari 2600, he's been hack'n'slashing and shoot'em'uping ever since. Mainly an FPS and action guy, Jason enjoys the occasional well crafted title from every genre.
@jason_tas
Previous Bloodstained: Ritual of the Night gets new trailer
Next The BG Game of the Month for May, 2017 is Injustice 2