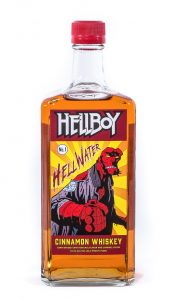 Craft distilled, small batch, and naturally flavored cinnamon whiskey retailing for $19.99 for a 750ml bottle. The 66.6 proof Hellboy Hell Water Cinnamon Whiskey is available nationally and can be ordered at www.hellboyhellwater.com.

Worthy Of The Name

Since Mike Mignola’s Hellboy first hit the stands in 1994, it has become a cultural sensation, racking up a dozen Eisner Awards and inspiring numerous spinoffs, from a novel line, to video games, to animated films and live action feature films. Hellboy has also inspired a draft ale, a wine and now Hellboy Hell Water Cinnamon Whiskey.

A fan of media on multiple platforms, I am always watching or playing something! Who knows what I will be on to next?
@mackeyp42
Previous Cassian Andor isn’t done yet, set to return in new Marvel Comics one shot
Next Unviversal Unveils Their “Dark Universe”