So we left of with Tracy Brand completing the Speed Force Bazooka, minus the power cell. The team is getting close to being able to stand up to the tyranny of Savitar. Will it be enough, find out in The Flash Infantino Street.

Team Flash is down to the final twenty-four of Iris’ life, according to what they have been led to believe. Everyone is retracing their thoughts, seeing if there is something they have missed. Some way to stop what is about to happen. Joe is savoring every last moment he has left. It is truly a dreadful thing to be able only to sit and watch a clock count down.

Iris and Barry stare at the ceiling, when Iris claims that she suddenly wants caviar. She sends her speedster around the world in search of something exotic, so she can have a moment alone with her thoughts. She has to record a message for Barry, that she is unable to say in person. 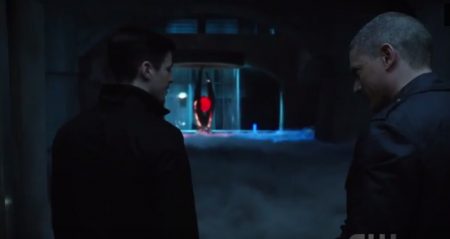 Barry and Cisco meet up with a friend who is the director of ARGUS, Lyla. They meet on the street so there’s a lower chance of being overheard. The building that she works in, houses a piece of technology that Cisco requires, in order to make the bazooka work. It is a part of the Dominator’s technology that they confiscated when his ship crashed.

Lyla won’t be so easily swayed, though. Barry’s history with mistakes, and the scale of what they are asking, leads her to deny him the request.

Barry decides that stealing what he needs is the only way to proceed. Flash and Kid Flash can be there and back before anyone notices. Cisco quickly stops him in his super-tracks, informing him that ARGUS is more secure than the Pentagon: Lasers, sensors, dampeners, cameras, retinal scans and more. Regardless of who you are, his plan is not going to work.

Cut to Siberia, 1892. Barry walks up behind Captain Cold, and with a gun pointed at him, he informs Cold that he need’s the ice king’s help. This negotiation wouldn’t be any fun, if Leonard Snart let Barry have all the fun. They can collaborate as long as they follow Snart’s rules.

The team is less than thrilled that Snart is helping in this plan of theft. Even less excited that Barry had to run back in time (again) to recruit him from working with the Legends. Staying true to his word, Barry did declare that he would do whatever he had to, in order to stop Savitar and save Iris. Savitar ‘remembers’ Barry recruiting Snart, and declares that ‘no speed gun can stop a god.’

‘You see the good in me, I see the bad in you.’ – Leonard Snart to Barry Allen

Barry allows Tracy to know his identity, and tells Joe to take Iris somewhere, he does not want to know where. Just keep her safe. 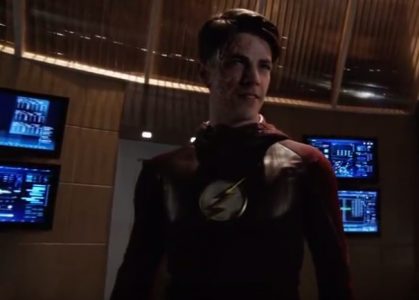 Barry and Snart are able to get into ARGUS, though the entrance was a bit bumpy. Iris and Joe, in an undisclosed location, have a few laughs before the counter hits zero.

Flash and Cold reach the chamber they are after, and Cold is able to bypass a rediculously overpriced safety measure. Just then they find the reason to ‘expect the Plan to go off the rails’: King Shark, a bipedal Great White shark metahuman acting as security of the power source they are after. Because who wouldn’t want a walking shark as their guard dog?

King Shark asleep in the corner, Barry and Snart enter to retrieve the power source. Barry grabs the item, and security goes haywire: Lights, alarms, and the door begins to close. With his powers unavailable, Barry is barely able to exit the room, though Snart is not so lucky.

Cisco is able to unlock the door and save Snart, but not before Snart promises to put in a good word for Cisco with his sister. This little escape plan ends up costing the guard Shark his hand for his trouble.

Barry is able to keep the stolen tech after showing his true colors while performing the robbery. (You’ll have to watch the episode to see how this one plays out.) So Barry takes Snart back to 1892. Then returning to STAR Labs, he asks where Iris is. HR blurts out the answer, not realizing that it was not the present Barry, but the future Barry asking. Now Savitar knows the location of his target, Iris West.

Harry, Joe and Wally are aware this was going to happen, and at least somewhat prepared to fight for Iris. Wally has the speed to fight, but is incapable of causing any harm to Savitar through his armor. Making quick work of Wally, Savitar powers down, and future Barry stands face-to-face with Joe, Iris and Harry. Joe tries to plea with Barry to stop this.

Before Harry can raise a gun against the speedster, he grabs Iris, jumps back into the armor, and disappears back to his Earth. Present Barry shows up right as they are acknowledging the disappearance.

Cisco has a vibe of fighting Killer Frost in a forest. When telling Barry about it, he tells Cisco to go, to stop Caitlin from making such a big mistake. This brings Barry to arrive at Infantino Street. The location where Savitar takes his love from him.

The entire season has been leading up to this point: Barry at Infantino Street. Joe is positioned on the roof, Cisco is in the woods battling Killer Frost. Savitar and Iris arrive, in preparation for Savitar’s ascension.

Barry disappears, and re-emerges, armed with Tracy’s Speed Force Bazooka. After a few attempts, he makes contact with Savitar. The self-proclaimed Speed God is able to shirk off the blast. Savitar knew that possessing the Philosopher’s Stone would save him from Barry’s bazooka.

So with that, we see the recording Iris left, while Flash is unable to reach Savitar before impaling Iris. Joe watches from the roof as his daughter’s life slips away. Despite everything they did to stop it, Savitar’s prophecy has come to fruition.

The CW Network has grown up a bit in their more recent series, and The Flash has definately had some darker tones because of it. The loss of Iris West is a huge blow to Team Flash.

With one episode left this season, it will be interesting to see how the team copes with her loss. Will Barry hold strong, and keep Team Flash alive, or will the future come true, and Barry fold into seclusion, becoming the Flash that presents Savitar? Will Kid Flash be able to keep Central City out of trouble, while Barry decides what he will become? Things are getting good.

A fan of media on multiple platforms, I am always watching or playing something! Who knows what I will be on to next?
@mackeyp42
Previous Comic covers go Infinite with these new Marvel vs Capcom variants
Next Nintendo Download: Playing with Fire (…Fire Emblem)