Little Nightmares is a little game. The main character is little. The world is little. And the story is little. Big things come in small packages.

This abstract horror puzzle platformer has some of the most satisfying game play I can remember in a platformer. There isn’t a ton of unnecessary action, but when the game makes you do some platforming, it feels great, both tonally and in terms of gameplay. The campaign in Little Nightmares is not huge, but it gets done what it sets out to do in the beginning.

The premise of Little Nightmares shouldn’t be taken lightly:

There isn’t a ton of background knowledge offered up at the beginning of the game. A very brief cut scene is revealed to be a nightmare from the main character, Six. After the brief scene, you are given control of the lighter-toting, yellow rain coat wearing little girl. The world is huge around Six, and the majority of the game revolves around using your wits and lighter to get out of a bad situation, even though you usually just land in a worse one, though. 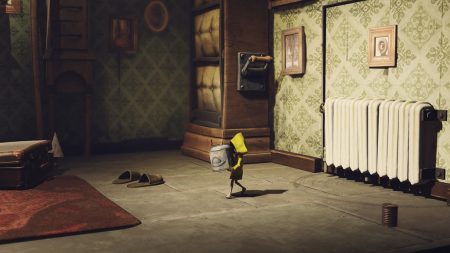 The game takes place in a three dimensional space. Six can jump, sprint and climb. When things get too dark, she can use her lighter to light up her immediate vicinity. There is no combat, and the only way to survive encounters with enemies is to not get caught in the first place.

As the game goes on, the environment and enemies become much more menacing and disturbing. Without spoiling anything, It is safe to say that the enemies look as though they could come out of a David Lynch film. The entire game does, actually.

The tone of the environment is my favorite part of the game. I am always on the look out for a dark game, and Little Nightmares truly delivers on that want.

The game play in Little Nightmares is satisfying.

There are ledges to climb and obstacles to cross. You can pull and push things in the world to solve puzzles, and doing this is imperative to coming out of Little Nightmares alive. At some points, you find yourself climbing tall ladders and jumping over ravines. Other times, you find yourself evading the horrifying enemies.

The gameplay is certainly not groundbreaking. As for the gameplay, there are no new experiences. That’s fine with me, though, because the world in which you do it is new and creepily dark.

My chief complaint among gameplay items is that the ledge grabbing seems to work inconsistently. There will be times when trying to grab a ledge simply does not work and you fall to your death. This is an annoyance, but it rarely happens.

Another complaint is that occasionally is the camera angle may not always be the best. You have full visibility, but you will be crossing a narrow beam and walk off of the side through seemingly no fault of your own. These issues were so few and far between that it does not negatively impact the gameplay. The atmosphere makes up for the minor missteps.

Top all of this off  with a few off the wall set pieces, and the overall gameplay in Little Nightmares is an absolute delight.

The art and soundtrack of Little Nightmares is dark.

The game fully embraces the darkness in both graphical and auditory senses. The environment is dark in nearly every scene, and when the light shines through, the contents of the environment are much creepier than the darkness. The art style is dark and creepy. Even the least menacing environments could evoke shudders from unsuspecting players. 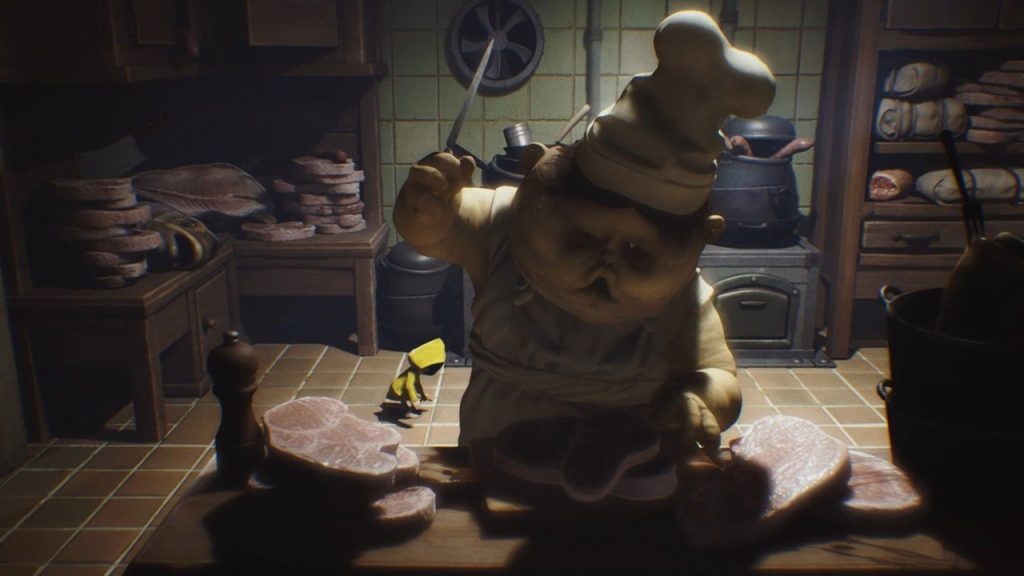 The sound design is something else entirely. There is chanting, eating, meat grinders making noise. Thinking back to my time with the game, I can’t even remember the music. This just shows you, or it shows me, at least, that the non-music sound design is much more important than the classically important music.

When Six falls from a high height, there is a terrible crunch. The enemies sound more like demented monsters than the people they are representing.

The entirety of Little Nightmares takes place in a dark hellscape. The darkness takes place throughout the audio and graphical representation.

The overall darkness of the game takes precedent over the otherwise standard presentation. The gameplay doesn’t do anything spectacularly different, but when illuminated by the context of Little Nightmares, tried and true game mechanics take on a new meaning.

There is a dark progression. There is characterization that takes place non-verbally throughout the campaign. Six grows in persona throughout, and by the end of the game, you get to witness a great progression.  The game isn’t that long, but every moment is soaked in creepy beauty.

Little Nightmares is a big experience in a small game and I cannot wait until I play it a second time.

Little Nightmares ushers the player through a crazy journey. There are a lot of great environments and situations that make this platformer a necessity, even if it is a little on the short side.

Erich was introduced to gaming by his grandfather before he could walk. Since then, he has grown up loving Nintendo and most games in general. He couples his love of videogames with journalism to cover news, provide reviews and tell it how it is in the gaming world.
Previous Brutally Honest Podcast 24: Get Trapped!
Next The launch trailer arrives for Prey, as the OST hits digital download