We left Ether #4 with a copper golem that had crossed over to the Earth realm. Let’s see how Boone Dias plans to deal with it in Ether #5. 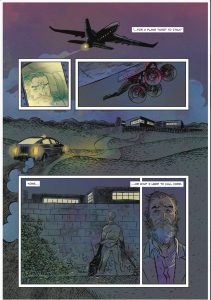 There is a giant portal between realms, that should not be there. Now to figure out how and why it happened. In order to do that though, first Boone needs to find the copper golem that has come through the portal. Perhaps something about it will tell him where to look next. Though how is he going to accomplish that?

He realizes that as he has been collecting artifacts from the Ether, one of them was a compass, capable of leading him to any Ether leakage. Sounds simple, you might think. Sadly for Boone however, he needs to travel halfway around the world to get it. So he ends up pawning some unusual looking piece, to score his ticket, while discouraging the shop owner to melt it down, for his own safety.

Boone travels back to his old home, halfway around the world in Italy. He finds his collection of trophies and baubles, seeking out the Know-globe of Finding. Apparently all it takes is to shake it like a snowglobe and think of the thing you are looking for. What he was not expecting, however, was that the item he sought would be seeking him as well. He was the golem’s only threat, so he would need to be eliminated.

The golem proceeds to throw Boone out the door, and smashing into a brick wall. It seems Boone will not last long, barely even capable of deflecting the attacks coming his way. Boone Dias is not the kind of man that prefers to carry a weapon. Rather, knowledge and communication can present the answer to problems. While he begins to wane philosophical about the
preferences against weapons, his old flame emerges with a nice big machete, and eradicates the problem of the golem.

Boone begins to apologize for what can certainly be a great many things, but she shuts him down before he gets the chance.
As he follows Hazel into her home, Boone is hit with a flood of old memories, of his life and family amidst his growing research into the Ether. 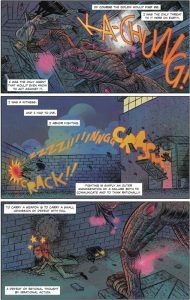 One of the trinkets that Boone brought back from the Ether was a map of the Earth, from their perspective. Hazel has been noticing some activity in the map, and it does not appear to be on a small scale. Small holes are being burned into this map. Boone realizes that these locations are the sites of portals. Someone, or something, is trying to break through to Earth. We know this can’t be good.

There were clues on the copper golem that lead Boone to the culprit. However, nothing so much as to lead to a conviction, so he must keep searching for ways to put a stop to the emerging portals.

A strange thing about the Ether, is spending a week in the Ether, loses you a year on Earth. So the more time in Ether, the more your reality disappears. We see more of how Boone and Hazel parted ways. Boone had a driving urge to understand the Ether, while Hazel was left behind to support the family, and raise their daughters. Boone was the only person who was able to travel to the Ether more than once and not go insane.

Boone Dias has no small job determining and saving the Earth from whoever is trying to break through from the Ether. He knows who is responsible, but how will he be able to prove it. We will have to wait and see what Matt Kindt has in store for us.

A fan of media on multiple platforms, I am always watching or playing something! Who knows what I will be on to next?
@mackeyp42
Previous All-New Guardians of the Galaxy #1 (Comics) Preview
Next Toast console cover (Gear) Review