Ever thought that your console was a little… meh, as it is? Wanna spruce it up a bit, maybe make it a little fancier? Read on.

Ready to get toasted?

Console labels and coverings are nothing new. No, that kind of thing has been around for a good long while at this point. I remember actually ordering console-covering stickers for my OG Xbox and PS2 two generations ago. They were pretty cool too, from what I remember. Thing is, they were more than a little kiddish.

But now we’ve got Toast’s lineup of coverings, and man has the game changed. So what makes ’em different? Well, basically, wood. 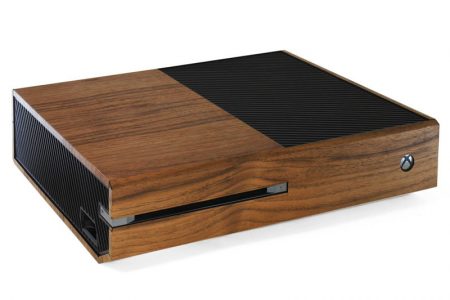 Yep, you read that right, I said wood. Toast’s lineup is crafted from actual lumber, which is something that I think has to be unique in the industry. It’s also really high quality, and more or less encapsulates the entire console in question. I got a look at an Xbox One cover for this review, made to fit the base X1. But I should point out that toast also makes a cover suitable for the new Xbox One S, as well as the PS4 family. So, whichever way you go.

In total, there are four different shades of wood tone to pick from when you design your Toast cover. I picked up a walnut one, but the line runs the gamut from light bamboo to basically black. You can get a lot at the walnut in the pictures here, which I’m pretty happy with.

You’ll also notice that there’s a nice little BrutalGamer logo emblazoned across the top of that Xbox One in the shots. And yes, that means that Toast will indeed brand your cover for you. It’ll cost you a little bit extra, but man does it look cool to have a custom-made console under your television set.

So it looks pretty good on there, but what about the application? I’m happy to say that while I’ve had a ton of issues with things like this before, Toast’s stuff is pretty simple to ‘install’.

While they are wooden, the labels are extremely flexible. So you’re not likely to snap anything on accident while removing them from the backing, or applying them to your console. It’s super simple too, and basically just peel and stick. Well, it’s a little more complicated than that, but not much.

The pack of labels comes complete with a pair of moistened wipes. And before you start, you’re gonna want to pop one of ’em open, and wipe down your console’s surface. Basically just clean it off a little, and make sure there’s nothing on there that could interfere with the application.

After you’ve done that, start with the aforementioned peeling and sticking. Definitely make sure you’ve looked over the instructions first, just to be sure that your sticking these things where you should… and uh, also to make sure you don’t do anything… dumb.

Toast goes out of its way to point out that you need to read the instructions first, but of course I didn’t. So basically, I pulled off some small wood flaps on one of the covers, thinking it was meant to come off. It wasn’t. I think it still looks okay honestly, but don’t do what I did. Yes, I know it’s annoying, but read the instructions. Trust me on that one.

Even if you do read the instructions though, you might find that not all of the covers fit perfectly. There was a little overlap on the Xbox’ power button for instance, that I couldn’t seem to work out. And while I’m on the subject, the front panel was a little too big as well. The sides kind of stick out, though just a tad. Is it a deal-breaker? No, not at all, and the overall look doesn’t suffer a bit.

Easy application, but read the directions - 85%

Looks excellent when in place - 90%

Applying the covers isn't difficult at all, and they look great when in place- even if you do screw up the application a little. Bottom line, Toast has a pretty great little product on its hands here. If you've ever wanted a little something extra out of your favorite console in terms of looks, then you're gonna want to take a long look at what Toast has on offer.

Jason's been knee deep in videogames since he was but a lad. Cutting his teeth on the pixely glory that was the Atari 2600, he's been hack'n'slashing and shoot'em'uping ever since. Mainly an FPS and action guy, Jason enjoys the occasional well crafted title from every genre.
@jason_tas
Previous Ether #5 (comic) Review
Next Injustice 2 Trailer – Your Battles Your Way