Home / Comics / The Visitor: How And Why He Stayed #2 (comic) Review

The Visitor: How And Why He Stayed #2 (comic) Review

The Visitor began watching Hellboy in the 1940’s upon his arrival. See how the investigation goes in the American 1960’s in The Visitor 2

So our Visitor has been living on Earth for almost 20 years now. He’s gotten the hang of how things go. Get married, become accustomed to ‘checking in’ at home, when you are going to be late. We take these things for granted on a daily basis. Add to that, the Visitor is not from here. Though he does not want you to see it, he is an alien. I’d say he’s blending in pretty well so far. 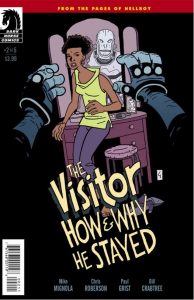 He has a mysterious journal from the future, that allows him to know certain occurrences at specific times. He knows where and when to be. He has begun to take notes on how Hellboy has embraced his demon abilities, but channeling them for a use different then what most would believe. Hellboy has taken on a position of authority and respect, in battling these strange events. One youth that Hellboy rescued in the 1950’s, Vic, even became a member of the BPRD team, aiding Hellboy in missions now.

We are treated to some of the Visitor’s backstory as he was sleeping in the alleyways of Tennessee. The local teenagers began to harass the homeless man when a woman steps into the alley with a broom, and chases the assailants away. Ruby, as we learn her name to be, takes our Visitor in. We do not know the specifics of their relationship, but we do know that Ruby is the woman that he calls home to ‘check in’ with. Better still, is that Ruby knows the truth of the Visitors identity. She sees him in his alien appearance, and is unphased by it, simply saying ‘make yourself presentable for company.’

On his way home during a bus ride back from Texas, the Visitor’s mysterious amulet began glowing, alerting him to more dangerous actions around him. This time Hellboy is not around, but he decides to investigate on his own.

Deep in the woods, we find a group of townsfolk participating in a ritual sacrifice of a pig. Runes enscribed on the sacrifice, wielding a kris blade and reciting an ancient language. What they were not expecting however, was that the pig would actually transmogrify into the Ogdru Hem god they were summoning.

The townfolk fall to their knees, praising the god they have raised. What they do not know is just what this god is capable of, if given the opportunity. The Ogdru Hem recognizes that the Visitor is not like the rest, and calls him out on it.

The Visitor produces his amulet, claiming he is not like the rest, and blasts the god back into nothingness. All that, and he is still able to make it home in time for visitors.

I’m glad to see that the Visitor has fit in among us so well. However it would be nice to see more in the relationship between him and Ruby. How did she find out what he really is? How long did it take her to accept him as he is? I guess we will have to wait for issue #3 to find out more.

The Visitor: How And Why He Stayed #2

Ruby and the Visitor are quite the couple, getting along like nothing is going on in this mad world. Aliens and Demons, don't miss an issue of The Visitor, How And Why He Stayed.

A fan of media on multiple platforms, I am always watching or playing something! Who knows what I will be on to next?
@mackeyp42
Previous Darksiders: Warmastered Edition is coming to the Nintendo… Wii U?
Next EGX Rezzed Hands On: Empires of the Undergrowth