Home / Reviews / Books / Will Save the Galaxy for Food (Book) Review 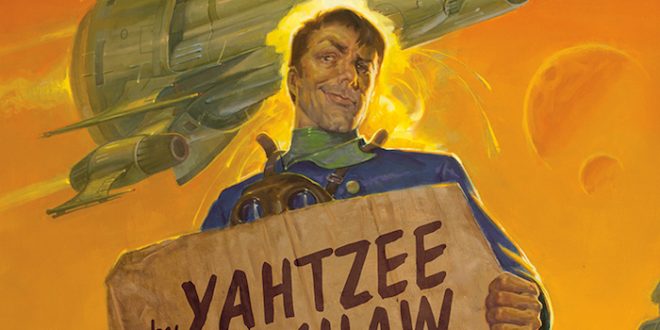 Will Save the Galaxy for Food (Book) Review

Will Save the Galaxy for Food, by Benjamin “Yahtzee” Croshaw, is an unfortunate choice for my first book review. This is due to the fact that I am a fan of the author’s work. Seeing as we have kept a rather open relationship until now, I thought it best to tell you immediately. I, contrary to the belief of many, do have something that resembles integrity and will exercise it accordingly. For those rather rude readers, who do not stick around to the end, I will say this: WSTGFF is a good book, and you should buy it. Now, other imaginary friends, let’s find out why…

The plot of this book is rather intriguing. Do you guys remember how the Golden Age of Piracy started? With all of those out of work sailors deciding that thievery was better than starving? The plot of this book is like that, but in space. To elaborate: we join an unnamed protagonist in his interstellar quest to earn some money as a star pilot. The story takes place after the invention of a new form of travel known as Quantum tunnelling, allowing for almost instantaneous travel and putting most star pilots out of a job. Due to this ending the Golden Age of Space Piloting, our hero will do anything for money, regardless of the trouble he gets into.

The plot of this story is handled incredibly well, to the degree that I cannot remember feeling bored at any point while reading. This is not simple gushing either, I genuinely enjoyed how Croshaw managed to create a distinctly sci-fi world without confusing me along the way.

It is assumed throughout, that someone reading this story knows at least what a spaceship is. I make no claims to knowing the inner-workings of space travel myself, and the book was rather accommodating. While this may have seriously turned off some science fans, not bogging down one’s story with explanations definitely helps. The plot, to return to point, somehow managed to immerse me completely and keep me guessing at the same time. Even when I thought I had guessed the end, and it seemed as though I was correct, I was still pleasantly surprised.

While I struggled to find criticisms for the plot, the writing is by far the strongest part of this book. This is a comedy book at heart, and certainly succeeds in being funny throughout. However, often times comedy writers will become lazy with certain aspects of their writing. The entire book with feel like a disconnected series of set-ups for jokes rather than a literary experience. Croshaw manages to weave comedy into his narrative expertly, allowing the reader to both enjoy the humour and get lost in the story. At certain moments in the book, the humour felt slightly forced, but those moments were few and far between.

If I was pressed to criticise, I would say that Croshaw often uses a great deal of complex words. I imagine that someone with a lesser vocabulary might find this annoying, and I certainly wouldn’t want to read with a dictionary on hand. However, this is not as big a problem as one might think. The use of these complex words livens the text up a bit, as well as providing a clearer image. One can hardly fault an author for flexing his large vocabulary, where else is he going to use it?

The characters are, unfortunately, the weakest part of the book. This doesn’t necessarily mean they are bad, in fact they are all varied and interesting. The problem lies with several characters falling into tropes. For instance, one of the main characters is a rich child named Danny. Danny, being a teenager, is obviously ungrateful and attempting to rebel against his father. This makes the character as predictable as anything, which will lose the author some brownie points in my book. These trope characters are, however, rather minor ones in the story and do become somewhat more interesting as the novel progresses.

Another issue I would like to bring up is that several character arcs reach an unsatisfying end. Many characters, most of the main and a bunch of the minor, have fantastic arcs that end perfectly. Some, on the other hand, do not and seem to just loop into their starting position. Going any further would lead into spoilers, but this does put a small damper on the ending. Otherwise, the characters are generally well rounded and clever enough to engage me across the border of science fiction.

To conclude, it is hard to write about a favourite author. It felt like a tiny betrayal to my integrity, however dismal it was in the first place. To reiterate however, this is a good book, regardless of how much you like the author. I had to struggle for a day after finishing it to find the minuscule criticisms I mentioned. It blew me away as a literary work, and I would wholeheartedly recommend it to anyone who would listen. Go and buy this, because I guarantee that you will not regret it.

And this is without bias...

A brilliant novel from start to finish with very little to complain about. Pick it up if you have time, or even if you don't.

Young, talented, funny, hard working, duck-like, consistently punning, the center of a collapsing star, older than time and weird. He is two of these things. Beyond that, I'll never tell...
Previous MOBIUS FINAL FANTASY Debuts on Steam
Next It Is Hard To Be Forgotton Anne