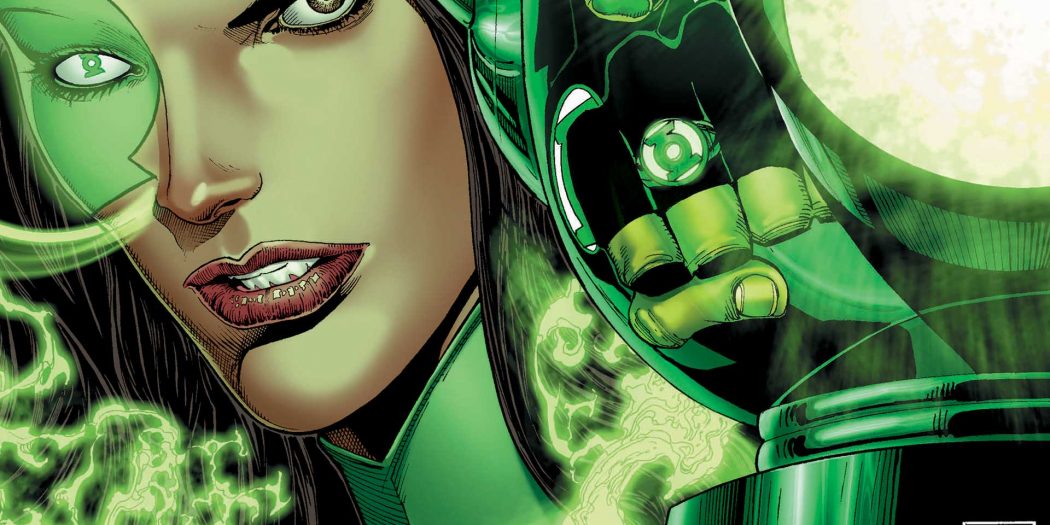 ‘Hal Jordan has other plans, so he entrusts Earth to the new kids, Simon Baz and Jessica Cruz. Are they up to defending the planet? Find out in Green Lanterns Vol 1: Rage Planet.

First off, let me say this: If you are new to the Green Lantern franchise, then you have picked a PRIME time to pick it up. The Green Lanterns are expanding, and we the readers get front row seats to see how things unfold. 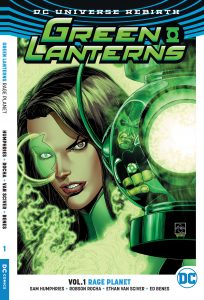 We learn that someone sees the Green Lanterns of Earth as a problem. Add to that, there is a ‘secret’ Guardian somewhere, and now he is being hunted. He has something new and mysterious in his possession. And we will get to him in a bit.

We meet Simon Baz, one of the new Green Lanterns of sector 2814, otherwise known as Earth. Simon is a Muslim-American, growing up in Michigan in the era of the World Trade Center attack. Simon is living with his sister and her family. Being a muslim of some note, it is because of him that his sister’s home is marked with terrorist graffiti. Add to that, he is on a federal ‘parole’ of a sort – struck a deal to tell the US government about the Green Lantern organization, in exchange for a clean legal record.

Located in Portland, Oregon, Jessica is a bit of an unusual pick for a Green Lantern. She has anxiety and self-confidence difficulties. So much so, that she has spent the last three years holed up in her apartment. Only after getting kicked out of her apartment does she track down her sister, in search for a place to stay.

Both Lanterns are new to the team, just recently gaining their rings, and still figuring out their abilities. Baz seems slightly ahead of Jessica, as his personality makes him a bit more prone to jump the gun, as opposed to her self-doubt. Unknown to the other, both Lanterns are summoned to the Arizona desert to deal with an unknown spacecraft. They are confronted by a Manhunter, and Simon claims, “I’ll take care of this.”

Both Simon and Jessica are hit by the Manhunter’s powers, and learn that this was a training exercise. Hal Jordan had arranged this charade, to show the new Lanterns that they are not yet up to the task. Cue some bickering that would be right at home among siblings, and you have a perfect idea of how our new heroes are behaving. Forcing them to work together, Hal fuses their Lantern Batteries together, telling them the Corps is all about collaboration.

The opening sequence we learn are the comments of the primary Red Lantern. He’s got some sinister plans brewing, and along with Bleez, they have Earth in their sights. Any plan from the Lantern powered by rage can certainly not be a good option. Atrocitus is a subscriber to the ‘go big or go home’ philosophy, and he has concocted quite the scheme here.

Our new heroes are called to investigate an unauthorized alien presence, which leads them into a downward spiral of seeing how well they act as a team. This is quite a trial indeed. With their first exposure to the Red Lantern’s powers, Jessica’s anxiety gets the best of her, while Simon learns that charging into battle headstrong can go wrong quite easily. Now, if that’s not bad enough for your first day on the job, imagine the entire region exploding behind you, leaving something even more menacing: what looks to be a volcano! A tower that is burrowing to the center of the Earth.

The secret Guardian mentioned in the opening of the book appears, and he is looking for a Green Lantern. Though not just any Green Lantern, he seeks Hal Jordan. Being a Guardian, he doesn’t take the answer ‘no’ lightly. He explains who he is, and what he has done. He has created a new ring, a ring that anyone can use! That just sounds like all sorts of bad news.

Geoff Johns and Sam Humphries have put together quite a tale here. These newest recruits are incredibly relatable. Sometimes we are quick to jump into the deep end without really knowing what is going on around us. Othertimes we either lack the certainty, or are overwhelmed by things around us, and fail in doing the things that must be done. Can Jessica overcome her anxiety? Will Simon learn to temper his actions long enough, to assess his surroundings? Add to that, Simon displays a power not seen before in the Green Lantern catalog: Emerald Sight. A psychic vision of possible futures? It will be interesting to see how this comes into play in future arcs.

Writing: How Johns and Humphries get these characters down so well, we'll never know. - 83%

Art: Green Lanterns are the most imaginative. Never miss a chance to pick up a copy. - 92%

Geoff Johns and company continue to amaze with their rebirth stories. Simon Baz and Jessica Cruz start out as some bumbling heroes with flaws to overcome, and following them on their journey makes this graphic novel difficult to put down.

A fan of media on multiple platforms, I am always watching or playing something! Who knows what I will be on to next?
@mackeyp42
Previous Hellboy Winter Special 2017 (comic) Review
Next Resident Evil VII (PS4) Review