Quinlan has faced incredible odds, though none so high as the leagues of great foes ahead of him, in The Strain: Mister Quinlan #4. 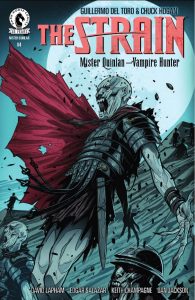 Mister Quinlan, Decimus and company have an hour to face an unknown number of bloodthirsty foes. Outnumbered and ill-equipped, these Romans hardly even stand a chance. No silver, no sunlight, and vampires as far as the eye could see. The ranks quickly fell from two hundred, to forty five.

Tacitus said he wished to test the limits of my sword arm. I have, thus far, never found my limit.

Quinlan knows the men’s days are numbered in this battle. Rather than running, he decides to take the fight to the oppressor. He is reminded that he has the capability to find his attackers. To rely on abilities long-buried, gifted to him by his creator. He learns where to find his attackers, hiding from the sunlight. They are not that far.

He knows the chances of survival are slim here. The battle is bloody and very few survive. He watches comrades fall. He fights to avenge his comrades. A laugh is had at the expense of the master, before the day is done. In the end, Quinlan must do for Decimus what hopefully all friends would: grant him a swift release.

Emerging from the bloody battlegrounds, Quinlan sees yet another battle on the horizon. Have the Berbers come now, for battle? Well, we will learn how far the sword arm will go. Quinlan fights until he is no longer able. Seeing a pleasant face, before the world goes black.

Quinlan has withstood gladiators, vampires, legions of enemies. Though there are still limits to what one person is capable of accomplishing. Even he is not invincible, but what will come of him?

It’s not too late, you can still pick up some of the earlier copies of The Strain: Mister Quinlan – Vampire Hunter at your local bookstore, comic shop, or even online for $3.99 US. Issue #4 arrives in stores and online on December 7, 2016.

In the middle of the desert, Quinlan and Decimus lead a squad of Roman warriors. Trailed by vampires, the odds are against them at every turn. The Master seems always nearby. Check out The Strain: Mister Quinlan #5 next month as we learn more.

A fan of media on multiple platforms, I am always watching or playing something! Who knows what I will be on to next?
@mackeyp42
Previous Star Trek Roddenberry Vault Giveaway
Next New Gen X book will have Jubilee at the helm, stars kids with antlers