DK’s latest ‘tell all’ tome is about none other than the man of the hour (in the Marvel Cinematic Universe) – Doctor Strange.

Strange… Doctor Strange that is

There’s nothing strange about DK publishing releasing another all-inclusive book about a comic book character. They have a ton and a half of them in their stable, including books chronicling the likes of Captain America, Batman, and Spider-Man. While many of those books have gotten updates over the years, there’s never even been one for Doctor Strange.

There’ve been plenty of them for characters that have yet to make feature film debuts too. So, in other words, there’s really no reason that Doc Strange never had volume to himself. I mean, he’s a pretty legendary character. Well, consider that little fact remedied.

With their latest release, DK has not only seen to release a book about Strange, but one that’s stunningly complete. If you don’t know anything about the sorcerer supreme yet, you will after you thumb though this baby. One thing to note though, is that this isn’t a book about the movie Strange.

Nope, this one’s all about the original Marvel Universe Strange. 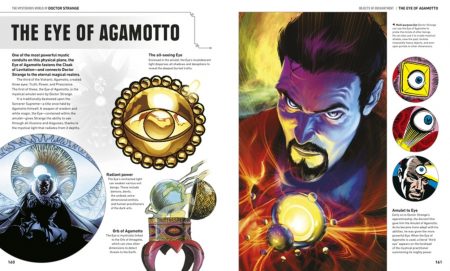 The all-seeing Eye of Agamotto

A total of seven chapters make up this book, which spans 171 pages total. They have cool titles like ‘Enemy Mine’, ‘Mystic Realms’ and more; all cool little details. And that’s something that coats this book – detail.

Loaded up with artwork from throughout the history of the character, The Mysterious World of Doctor Strange isn’t short of ‘pretty’ in any sense. If you’re a comic fan, then there’s plenty to gawk at in this one. That includes some interesting twists on classic illustrations too.

Just ‘for instance’, chapter 3 opens with a drawing of Mordo and a splash of Strange flanked by several of his allies and enemies. this piece isn’t just re-printed though, as it’s cast in crimson red. No, it’s not staggering by any means, but it’s cool. And if you’re familiar with the original work, it’s a cool variation. Not that anything in this volume needs that.

The art on display here is, frankly, amazingly cool. Again, it spans the history of Marvel Comics since we’re talking about a hero that was born of the minds of Steve Ditko and Stan Lee. So, you know, he’s been around for a while. And if you’re aware of all that that means, then you already know that you’re in for a visual treat here. 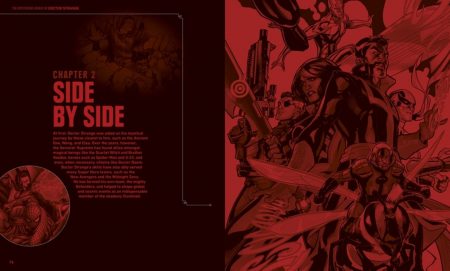 By the Hoary Hosts of Hoggoth!

Let’s get back to the chapters themselves though, since they’re the stars of the show. Authors Billy Wrecks and Danny Graydon have put together a wonderfully complete book… to a degree. I’ll clarify that in a second, after we get to what’s between these covers.

All seven chapters are preceded by a forward from Roger Stern and followed by a glossary and index. If you don’t know who Stern is, he’s written tons of your favorite comic heroes in his career, including Spider-Man, Green Lantern, and yes, Doctor Strange. S, bottom line, he knows from what he speaks. It’s only a page, but Stern lays down a cool little history-in-a-nutshell for the good Doctor. It’s cool, but short.

Each chapter however, is fairly in depth. They all delve into a different facet of Strange’s world, and do a decent job of detailing each one. Strange Magic starts things off, and details the man himself, and the magics that power him. It’s pretty far-reaching too as it stretches all the way from his origin to the recently concluded Empirikul arc.

Past that, we get to see the allies of Strange (in Side by Side) as well as his enemies (Enemy Mine). Not stopping there though, we also are treated to the greatest cosmic forces in the Marvel U (The All Powerful), the Mystic Realms, Strange’s greatest spells (Spellbound), and his Objects of Enchantment.

So, there’s a lot here. As I said, it’s all laid out pretty well, with a few exceptions. 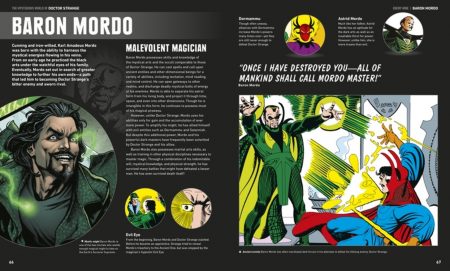 The Crimson Bands of Cyttorak

Now, I feel like I have to reiterate that almost everything here is done well. I like the book, I really do. I have one issue though and that’s that not everything is bound into a chapter. I’m used to getting dedicated chapters in books like this. I like that. And for the most part, we get that here too in The Mysterious World of Doctor Strange.

Where we don’t though, is in instances like the ‘Deal with the Devil’ storyline. It’s a famous arc at this point, where Spider-Man makes a deal with Mephisto, and it shook up the Spider-books in a big way. It was somewhat controversial too, but we’ll leave that alone for now.

I have no problem with that particular arc being included here. But I have an issue where it was placed. It’s in the Enemy Mine chapter, and comes right after the entry for Mephisto himself. See what I mean? Instead of having a separate section for famous stories, we get the wedged into other chapters.

True, this only happens a few times, and all the entries are just as well done as everything else, but I would have liked a different chapter for it all. So it’s not book-breaking or anything, but just something that annoyed me a tad. Other than that though…

A pantheon's worth of classic artwork - 90%

Realms worth of information - 90%

A magical tome that could've used another chapter - 80%

The Mysterious World of Doctor Strange is a book that's worth the time of any Doctor Strange fan, and really any Marvel fan in general. It's loaded with excellent artwork from throughout the history of the character, and assembled into a terrifically detailed tome loaded with info about Strange, and the mystical side of the Marvel U in general. It's not perfect, but it's tons of fun.

Jason's been knee deep in videogames since he was but a lad. Cutting his teeth on the pixely glory that was the Atari 2600, he's been hack'n'slashing and shoot'em'uping ever since. Mainly an FPS and action guy, Jason enjoys the occasional well crafted title from every genre.
@jason_tas
Previous November 16th Valiant Previews – Harbinger Renegade and Britannia
Next Space Goat announces Terminator board game