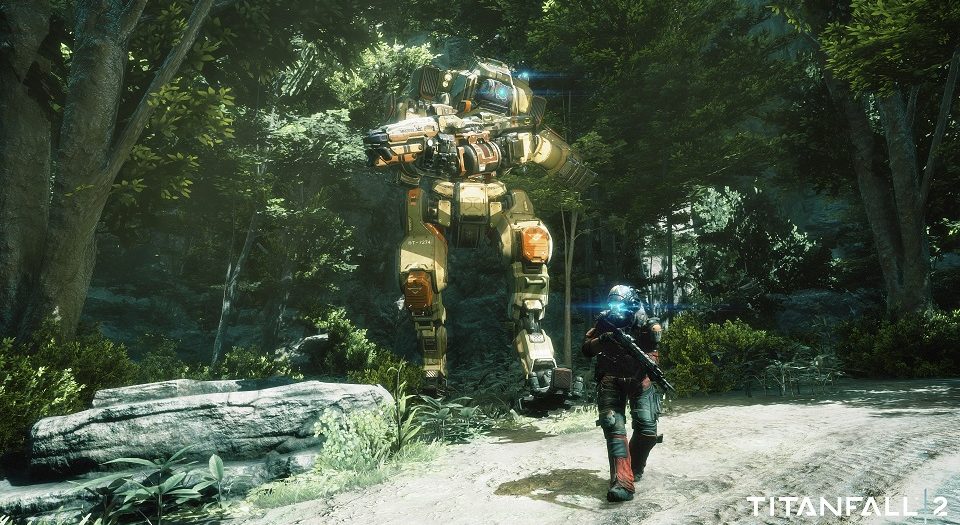 Rifleman Jack Cooper and BT-7274 are linked, and causing no end of ruckus in the new trailer for Titanfall 2.

It’s nice to have a Titan for a pal

So the biggest (probably) change from Titanfall to this new sequel is that there’s a campaign. The lack of one was, arguably, the biggest knock against the original. I know personally, it kind of killed it for me. And I know a few others that were turned off by it too.

So to have a fully fledged campaign in the sequel, is sort of selling me on the game already. That’s especially true since I’m already intrigued by the world of Titanfall. I mean, the concept is awesome, let’s be honest. Piloting giant AI-powered robots is sort of a can’t miss.

Here in the single player campaign trailer we get a good look at what that will entail too. Cooper, who you play as, can do all the wonderful things that a pilot in the first game could do. That includes wall-running and, from the looks of it, calling on your big bud for a little help.

That kind of begs the question of why these Titans even need pilots in the first place, but I digress. The point is, this looks cool.

Here’s the official breakdown of the narrative

In the single player campaign, players will experience the story and relationship between Titan BT-7274 and 3rd Class Rifleman Jack Cooper, as they explore the mysterious planet of Typhon and discover the Interstellar Manufacturing Corporation’s (IMC) intentions. BT is the first Titan built by the Militia to battle the IMC, who’s capable of using any Titan loadout and embodies the Militia’s Culture of teamwork, craftsmanship and looking out for each other.

Jack Cooper is a grunt with aspirations of becoming a pilot, whom Militia Captain Tai Lastimosa takes under his wing and trains in secret. When an investigation of a research facility on the IMC controlled planet of Typhon goes wrong, Lastimosa is killed in action, there is no other option but for the two to link up and work together to finish the mission BT and Lastimosa started. The more BT and Jack work together, the stronger the bond between Pilot and Titan becomes.

You can learn more about all of the above on the official Titanfall blog here, should you so desire. Also, if you’re going to be around in about a half hour, you can check out a special talk with Respawn head Vince Zampella on YouTube Gaming.

That kicks off at 5pm pacific time, right here. Zampella will be talking campaign and some of the new gameplay that wan’t in Titanfall 1. As for the sequel in question, you can look for that on the Xbox One, PS4, and PC on October 28th.

Jason's been knee deep in videogames since he was but a lad. Cutting his teeth on the pixely glory that was the Atari 2600, he's been hack'n'slashing and shoot'em'uping ever since. Mainly an FPS and action guy, Jason enjoys the occasional well crafted title from every genre.
@jason_tas
Previous October 5th Valiant Previews: Archer, Armstrong, and Bloodshot
Next Civil War II #6 (Comics) Preview