With the US presidential election build up in full swing, you can’t turn around without bumping into some form of political content.  Political Animals, being developed by Squeaky Wheel and published by Positech, takes the world of politics and elections and puts a fun spin on things.

Political Animals is a turn based strategy game where two sides are aiming to get as many voters as they can in order to win the election.  You start off by choosing an animal to be the leader of your party, before choosing traits that they have which will effect certain facets of the game.  Then, you choose an island and the main concerns that they have, such as education or health care.  You then choose your staff, which will have expertise in various areas that you can use to your advantage, and also choose how much knowledge you have in specific policy areas.

The aim of the game is to get as many voters as possible.  You start from your HQ and move to various districts of the island, trying to convince the people there to vote for you.  Once you move in to a district, you can perform various actions to help your cause.  For example, you can campaign in an area to persuade people that you will be better for them than your opponent.  You can also do thing such as rally your supporters or try to raise funds for your campaign.  There are also some underhanded tactics you can try, such as trying to manufacture a scandal for your opponent, or just good old fashioned bribery.  How clean or dirty you fight is up to you.  But you only have a limited number of action points per turn, and each action you perform will take up some of those points, so you have to choose what you do wisely.  There are also a selection of map overlays which will give you a bunch of extra information, such as population for each district, what they want from you and so on. 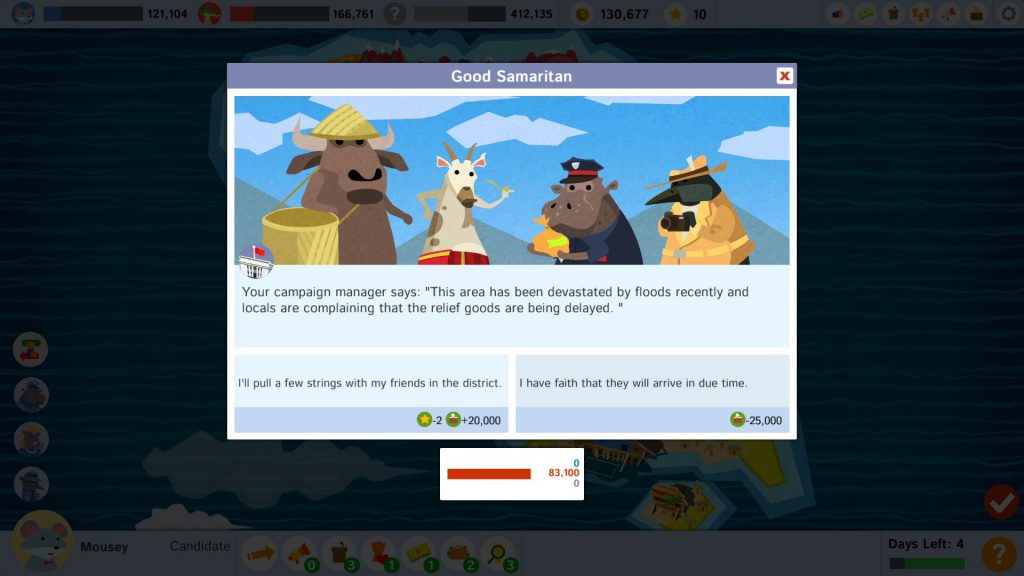 As well as direct actions you can take, every now and then there will be events that will take place that you have to take care of.  Here, a situation will be presented to you with a number of options for how to deal with it.  Your campaign will be affected differently depending on what action you take.  For example, one option might gain you more voters, but lose some action points.  Conversely, the other action will cost you voters, but give you more action points.  Another situation might involve you taking some sort of bribe, that will gain you some money but will give you a scandal point, which your opponent could potentially take advantage of.

This all goes on for a set number of turns.  Once the turns are over, each district will have their votes counted.  This includes both the votes you know you’ve already secured, plus any voters who were undecided up until election day itself.  You never know when your policies might swing some voters your way on the last day, so nothing is truly decided until the very end.

Overall, Political Animals looks like a fun game which anyone can enjoy.  It takes the whole idea of politics and gives it a level of enjoyment and charm that real politics doesn’t really have.  The game is still in development, and you can find out more at the game’s official website.

Mike is Brutal Gamer's Indie Editor. He has been playing video games since the early 90s and is fond of racing games, puzzlers and MMOs. Typing /played while in WoW makes him cry, but not enough to stop him playing some more.
@Ognawk
Previous The Rabbit And The Owl (PC) Preview
Next EGX Hands-On: TV Trouble