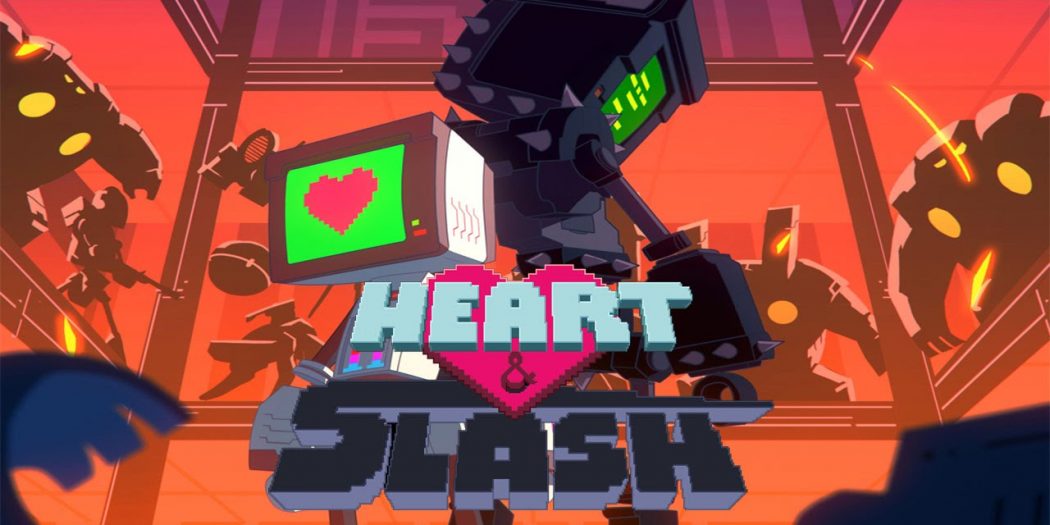 Heart&Slash: Another entry into a thriving genre

Roguelikes are a genre that have made a tremendous comeback in recent years. After several sleeper hits in 2011 and 2012, the concept behind Roguelikes have been revived and experimented on. Heart&Slash is the most recent in a very long line of Roguelikes games that have been recently released.  Though this begs the question. In a world where Rogue Legacy, The Binding of Issac and FTL: Faster Than Light breathed fresh new light into the genre, can Heart&Slash stand on its own?

Heart&Slash is, as the second half of name hints at, a hack and slash game. It centers around traveling through randomly generated levels, defeating enemies and collecting power ups. As mentioned before, the game is also a Rougelike, meaning all the elements associated with similar games are present. Random equipment, high difficulty, short playtimes and a high focus on replaying.

The other half of the game’s title comes from the name of the protagonist, a robot called Heart. At the start of the game, Heart is undergoing a simple training exercise when a robot revolution starts. It is successful, and a hundred years later Heart wakes up to find a world ruled by the machines. Heart does not agree with the other machines and their desire to destroy humanity. Taking orders from his long dead creator, he sets out to fight them.

How is the presentation?

This is easily the strongest aspect of Heart&Slash. It has a very unique look, via a well put together combination of design and art style. The design makes heavy us of pixelated 3D models and bulky robot design. Heart and other robots having thick, square heads gives off the feel of the future as envisioned by the 1980s. The art style compliments it with bright, vibrant colors, bringing the world ruled by robots to life. Colorful and cute robots that have turned traitor to their masters

The music is nothing short of beautiful. Impactful and strong, it has a very cheerful tone to it, while still remaining intense. It works well in the look of Heart&Slash, conveying that, even though these robots have appearing designs, they took part in the genocide of the human race. Every track fits the gameplay it plays over. Whether it be exploring, a common fight, or a battle against a powerful foe. The beat will shift to match the tone. 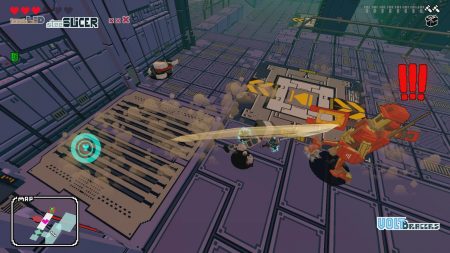 Heart&Slash is something that can be described as being, at best, sloppy but enjoyable. The scenarios that the game generates for combat are well thought out. Robots of all kinds serve as your enemies. Ariel, ground based, big, small, some use lasers, some use missiles, some are armored, some have shields, and some buff allies. And the cherry on top is that they all explode when they die, which is always a plus. They’re well thought out enemies that play off of each other when swarming you.

You are given a wide variety of weapons, mainly melee based with a handful of guns, to face them with. They are quite satisfying to use, particularly the ones with unique attacks and animations, and each has a unique look. They can be upgraded, as can Heart, with the parts picked up from defeated robots. This is necessary, as it is nearly impossible to beat the bosses at Heart’s base level. Upgrades do not carry over after death, but unused parts do, encouraging players to be careful with them.

The combat can be a little finicky at times, particularly against airborne units. It’s simply hard to land a direct hit, with how fast all the characters move, combined with the weapons usually having a short range. The flying robots are even harder to hit. It’s a bit of a pain to time the blows just right with the speed that Heart jumps. Despite this, it remains enjoyable for the most part.

As stated before, the combat is enjoyable for the most part. Sadly, however, there are moments when it falls very flat. The boss fights are extremely difficult, and not in an enjoying or challenging way. They all hit hard and move fast, making fights against them tedious. The only effective way to fight them is to find a single attack that works on them and repeat it until they die.  All too often these fights end prematurely, usually with the player dead. 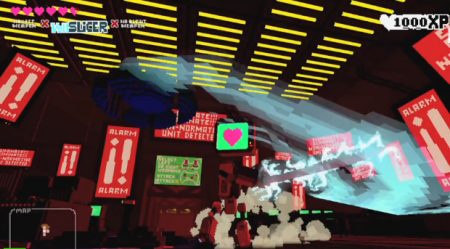 To make matters more complicated, it is next to impossible to defeat them without upgrading yourself. Attempting to fight the bases with a base level will end with a quick and painful defeat. But due to the nature of the upgrades, they get washed away at the end of each level if you used them. This puts the player in an uncomfortable position. Save upgrades for the next run and sacrifice this one, or use the upgrades and risk throwing them away. It doesn’t feel like resource management or a tactical call. Only tedious.

This heavily ties into the next main problem with the game, the poorly done Roguelike elements. The idea of a Roguelike is that every run is supposed to be different. That this time you’ll find a weapon or an item that will change everything. While the weapons in the game have a fair amount of variety, none of them feel like game changers, and none of them are worth much later on without upgrades. Because of this, various runs through the game can end up feeling rather similar. 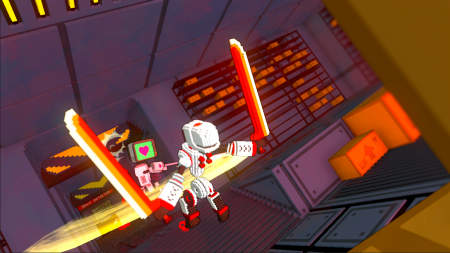 The end result is that the game feels like you’re building up to inevitable failure. Each run feels like banging your head against a concrete wall in an attempt to break it down. Even if you succeed, you don’t feel a great deal of satisfaction due to how long and frustrating it was. Unlike many Roguelikes today, there is little overall campaign progression, permanent upgrades that carry over from run to run. Random equipment can be unlocked, but none of the weapons are particularly strong, and it isn’t even clear what the armor even does half of the time. So each run ends up feeling like wasted time when you have to start over from the very beginning.

Heart&Gear isn’t a bad game, but it is a flawed game. It has a lot of good aspects but the problem is that they don’t seem to lead anywhere. Get through the hordes of enemies, spend all the upgrade points you get, only to eventually get killed and have to start all over. It creates a game where the build up can be enjoyable, but the payoff disappointing. And in a game requiring multiple playthroughs, the build up itself can become less enjoyable.

Heart&Slash can still be enjoyed, but it feels like it could’ve been better. More emphasis on overall progression and your victories meaning more would’ve gone a great deal. As it stands, it’s an imperfect but fun game best played in short bursts.

A game that has a lot of creativity and excellent presentation, but sadly doesn't build up to much