I join you once again internet, with another Brutal Gamer comic review. This week, I managed to get my grubby paws on this comic for a Groo: Fray of the Gods review. This is the first issue of the limited series being published by Dark Horse Comics and released on the 20th of July.

Let’s just dig in, shall we? Groo, as I am sure most of you know, was a comic series first published in the 1970s. I, however, did not know this prior to 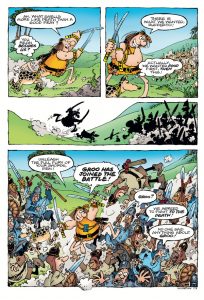 reading it; so I was suitably confused about certain elements. For one: throughout the story everyone is terrified of Groo. I initially thought this was just dropping us into the most interesting point of our character’s lives, and I enjoyed the thought. Once I learnt that this is because the guy has had 36 years to ingrain himself into local memory, the experience was dampened a bit.

That isn’t to say that all good stories must be new, and Groo certainly has good writing. The humour in Groo is that very dry Asterix-style humour, and I can definitely get behind that. The problem I had with the Asterix comics, i.e. too much dialog, doesn’t appear to be a problem here. I would say that the dialog is spaced out enough for me to still be interested in the writing and the action at the same time. But there is no such thing as perfect writing, probably, and Groo as a character is rather bland.

He is that old-style 70s meat-head, who solves all his problems by fighting and isn’t very smart. They really could have done more with him in the first place, to be honest. He is essentially feared by everyone, but doesn’t let it get him down, which endears him to me. This is a light-hearted comic though, so I shouldn’t expect any kind of psychological response to that. Although, I suppose this is a problem with the entire series rather than this individual comic. In the end, Groo makes the story boring, but the quality of the writing behind the other characters saves it.

The art style, which is to be expected by fans, is that very old Beano kind of style. As I said before, however, this shocked me when I first looked at it. I 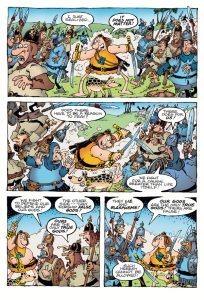 was honestly expecting something completely different, and when met with the comic, I nearly jumped out of my skin. “A comic using an old style?” I thought, “They must surely be trying to reach my nostalgia centres with this.” Unfortunately for Groo, my nostalgia centres are reserved for storing spare gum.

All joking aside, the art style isn’t bad at all. It does remind me of a simpler time, reading Asterix in my childhood and whatnot, but not in a malicious way. This is simply how the comic was originally drawn, and it works with the story. The style is perfect for this kind of light-hearted action comedy, and if it was drawn today, I don’t think it would work nearly as well. While it looks simple, the art is incredibly detailed to appear in such a way.

The colours are bright, and the people are odd shapes, all to appear to a simpler mind-set. This is the perfect defence against analysis, as it forces one to skim over the details, but also makes the action quite forgettable. This, too, fits the purpose of the story. This isn’t an odyssey of adventure, but a quick tail to be read and re-read in one’s spare time. You don’t set aside time to read Groo, you read Groo to kill time, and it achieves this perfectly.

While I am not a huge fan of the story itself, the artwork and over-all feel of Groo left me in a serene state of relaxation. I felt like I was in primary school again, willing away the day with a funny comic. But this is the exact feeling that has bothered me for my entire review. This comic was clearly made for fans, with story world, characters, and old 70s artwork all intact. From this we can deduct that Dark Horse Comics and the creators are going for the nostalgia dollar here.

Aside from appeasing fans, this is the only other explanation I can arrive at. All that kept me going throughout was the occasional chuckle and that nostalgic feeling the art gave me. I am never one to buy something because of nostalgia, it’s always worse than you remember, and I would not suggest it. But if you are a fan of Groo, or someone who doesn’t care about the story and just wants to feel like a kid again, I suggest this comic and a therapist respectively.

If you are a fan, then knock yourself out, but if not; I can't imagine you enjoying this much. If you are here for the nostalgia, then go an read a comic series you know after checking into your comfort zone.

Young, talented, funny, hard working, duck-like, consistently punning, the center of a collapsing star, older than time and weird. He is two of these things. Beyond that, I'll never tell...
Previous Take an advance look at Bloodshot USA #1
Next Monster Hunter Generations on 3DS