Hello internet, and welcome to something new on Brutal Gamer. This week I will be reviewing the recently finished first season of Boku no Hero Academia. This presents the immediate problem of fans accusing me of parade raining one of the highest rated anime series currently. Then finding out where I live, burning down the dead tree outside my house and collapsing from an asthma attack. That being said, I feel it necessary to make sure that you guys and gals know that this is an absolutely subjective review, and I’ve been meaning to get rid of that tree anyway. 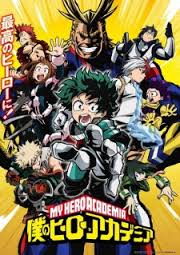 Let’s get down to arguably the most important part of an anime, the story. Without wishing to spoil, the plot is essentially about these things called Quirks. Quirks are like mutations in the X-men, usually bodily changes that allow the user to do incredible things. These Quirks have surfaced in this particular anime world in most people, including people who have since become superheroes. However, quite a few people do not have a Quirk, including the main character Izuku Midoriya. The story revolves around Izuku’s obsession with heroes; his inability to become one; and his favourite hero, All Might, passing his Quirk along to Izuku.

I have to say, the writing in this show is pretty good. The plot is fairly shounen, so it has lots of “friendship is the ultimate power” and rivals, but all in all the way is delivered makes it interesting to go on. This type of show is not new, which is why I am truly impressed by how fresh it feels. The characters are likeable, a few are kind of in the background or stereo-typed, but all of them are interesting. The plot also has this way of sneaking up on you, and it is difficult to predict exactly what will happen in each situation.

However, I do have to go back a bit on what I said earlier. While the characters are likeable, only the characters who speak are likeable. There are a bunch of characters in the background of the main cast, that are mentioned at the end as being formidable, but haven’t even been introduced properly. Certain main characters are annoying as well, but not in a deal-breaking sort of way. 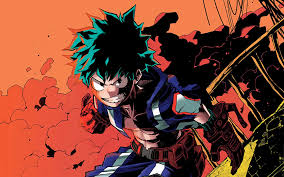 The art in this show is pretty good. It is fairly simple, which is to say that each frame isn’t cluttered up with too much stuff. You always have a pretty good idea of what is happening from the visuals, and it is worth it. The effects on display here are all visually appealing; with lots of little touches, such as debris from destructive attacks being consistent and so forth. The character designs are all interesting, but all the main characters look unique enough to stick out like super-powered thumbs in any bunch of normies.

What I, personally, find most appealing is that everything is hand drawn. I may be forgetting a tiny bit of something, but there is pretty much no CG in this anime, which I love to bits. The knowledge that someone took a long time to hand draw every single image I am seeing, makes the show all that better to me.

That gushing session over, I must comment on the fact that this is an action oriented anime. That means that, like most others, the budget was spent on the fight sequences. They are very well done fight sequences, but if you are looking for subtlety in the emoting department, then leave. All the emotions look over acted, but this luckily falls into the theme of the anime. 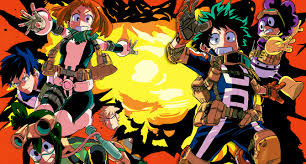 The sound design here is pretty good as well. While the character’s voice actors sound like, and probably are, every other shounen character in the world; the sound effects are done really well and truly immerse me in the experience. The music, while being fairly average on its own, is so well placed that it drives home the point of each scene 1000 times harder. This, again, is about the little touches; such as the rival, who creates tiny explosions with his anger that have tiny popping noises attached.

The opening and closing, while also belonging under art, are much better in the sound department than the art department. The art isn’t bad, mind you, just kind of boring “inspirational” images to get you pumped for an episode and sadder ones to make you bummed that it’s over. These are, however, accompanied by excellent songs; particularly the ending song that makes you look forward to the next episode even without the #inspirational imagery. While openings and endings should be equal, I feel the music here serves its purpose so well that the mostly boring images are compensated for. 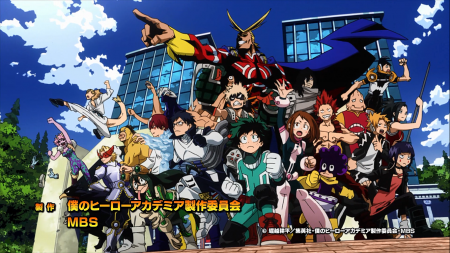 In conclusion, this show is fun. I enjoyed my time with it, and every aspect seemed well designed. However, while this is a good show and I heartily recommend it, it isn’t something that will stick with me as a favourite show. Just by reading this review you can see that I struggled to find things wrong here, because all the good things out-weigh the bad. That doesn’t necessarily mean that this is all good now, because when you have equal weight on both ends of a scale, it makes the scale level. This is definitely more good than bad here, but not enough to make this stick with me. Give it a try anyway though, then complain in the comments about how stupid I am! Thanks for reading.

Over all a fun experience, but not incredibly memorable afterwards. Excellent on the small details, and beautifully hand drawn scenes.

Young, talented, funny, hard working, duck-like, consistently punning, the center of a collapsing star, older than time and weird. He is two of these things. Beyond that, I'll never tell...
Previous Target Earth returns as Assault Suit Leynos
Next Return to Arkham pushed back, rumored for 2017