Who knew that feelings would take us so far? 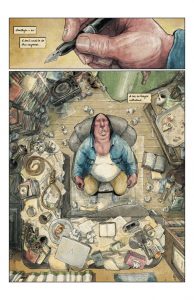 “Negative Space” is a new series brilliantly penned by Ryan K Lindsay with wonderful artwork done by Owen Gieni and released by Dark Horse Comics. What if I were to tell you that our feelings were something of a commodity? What if I were to say that our most valuable feeling is our sadness and depression? What if I were also to tell you that there is a company who’s sole mission is to harvest our sadness, even create situations where our feelings of hopelessness are amplified so it can be sold to an ancient alien race that lives at the bottom of the ocean? This is the backstory for “Negative Space” where we follow a day in the life of our protagonist, Guy.

Guy is down and out and judging from the first page of the story (right sidebar) he has given up on everything. The first view pieces of writing in the story are the words that will be filling his suicide note as he is planning on taking his own life. One thing though, keeps him from doing so. Writers block. As if things weren’t bad enough for him; he can’t even finish writing his own goodbye letter to the world. Things only get worse from there for our protagonist. I won’t go into too much detail but trust me when I say “Things get REALLY bad for him” and all due to a shady organization Hell bent on mining his desperation and depression. 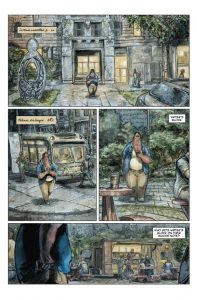 Believe me when I say that this story is nothing short of amazing, and at the same time, realistically scary. There is something scary about seeing someone who is so down on their luck that they just feel there really is no way out. There are so many who suffer in this way in our world who feel that the world is truly against them. “Negative Space” turns this idea on its head. There are clear influences from Monsters Inc, The Matrix as well as Cabin in the Woods. Though, with those ideas and influences in mind, they absolutely work and make you wonder. Ryan K Lindsey has written a phenomenal story here and I truly cannot wait to see where this book takes Guy. 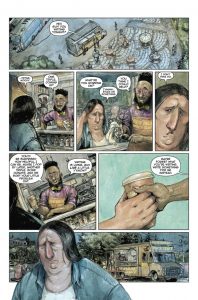 There are several characters in play in this story but your main focus is Guy. He is the “every-man.” Guy is just like you and me. He isn’t physically fit, he isn’t in shape or sports rock hard abs. Guy is a character who alone breaks the norm from what we typically see in comics. Here, Guy is a Native American who has no family. He is overweight, sports long hair and is gay (though I do not believe he has come out yet.) Guy is such a welcome departure from the norm and I feel that Ryan K Lindsey’s choice for his protagonist to be framed this way makes him a thousand times more relatable than  your typical millionaire superhero (nothing against them.) I love Guy and I want to see him surpass and I want to see him overcome. You will see yourself rooting for Guy and want to see him prevail.

A sad and yet uplifting read

Overall, Negative Space is a series that makes us look at what we have in our lives and see how valued our memories are and that depression is a very real thing... though in this Universe, it's manipulated and sold for profit. So unique.

I am an avid gamer and have been since a wee cub. I cut my teeth on fighting androids in the year 20XX (Mega Man), stomping on Goomba's (Mario Bros.) and taking a punch to the face (Street Fighter II Turbo). I still play to this day and am a MAJOR adventure gamer. Single player games are my bread and butter; this is where I spend most of my time, though I have been known to pour a ridiculous amount of hours on Destiny. Damn you, Bungie!!! I love all games from pixelated to Unreal Engine smoothness.
Previous ESL Cologne 2017 Already Announced
Next Daydreamer Finally kind of Arrives on Consoles