Shadowman has an interesting premise. Set in 4001, nearly 2000 years into the future, a human city has a symbiotic relationship with a stranded deadside city. Basically, the deadside are demons who once tried to invade earth from an alternate dimension. Now, every season, three human orphans are sacrificed to keep power on in both cities.

The book has all the expository goodness one would want from a first issue, even if the message and tone is a little contrived at times. 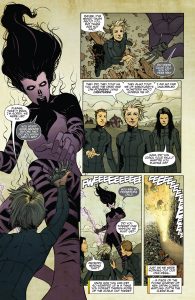 The plot of the book is as follows: an influential man in the human city is influencing the people of said city to revolt against the demons on the other side of the wall. With the orphans who are sent as sacrifice, a plan to destroy the demons is hatched. What follows is a bit contrived: the orphans realize that the humans are the evil ones and that the demons have never hurt anyone more than they need to.

An ancient god type figure is awoken, the wall is breached, and before the end of the book, the three orphans end up in a very different position than they previously were in. That being said, the journey to the new position is a little ham fisted. It feels like the message being pushed is being pushed without any semblance of subtlety.

Although the message of the book seems very clear after the first issue, I hope it will change directions or at least prove to not be as predictable as I think it will end up being. There is a ton of potential in this universe, and I would absolutely hate to see it wasted on an archetypical “humans are evil” story line.

The characters are interesting for what they are, but the real hook to keep reading for me comes from wanting to know more about the demon society. Knowing how these people operate can add some more dimensions to the story and make the resolution over time less obvious.

The writing flows how it would be expected to flow. Take from that what you will. A lot of the dialogue from the story is actually an inner monologue from the main character. This is interesting, and it catches you up on the story without spending two pages treading uninteresting dialogue just to explain the inner workings of the world. 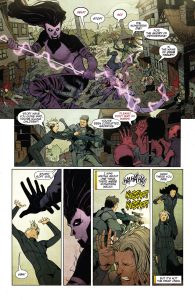 The characters are somewhat believable for the setting. I can absolutely believe a human preaching freedom from demons, even if it is only so given the current political climate in the United States. The idealistic orphans are also interesting in that they feel like they are young and able to be influenced by things they hear, while still being more than capable of thinking on their own and coming to their own conclusions. In all, the orhpans are the most interesting characters in this debut issue, and I want to see more of where they go.

The art in Shadowman fits the theme. It has an unpolished look, but clearly, the type of art employed in the book is deliberate and well done. Each character has a unique look. This is really just expanded upon when the demons start appearing. The enviroments is satisfying to look at, and each scene has a deliberate look that I enjoyed as I read the book.

A promising adventure into the distant future:

I am excited to see where the series goes from here. The foundation is set for a fulfilling adventure. I really hope, though, that the story goes somewhere other than the predictable story line which it appears to be following.

Shadowman #1 has a great feel and promise, even if the first issue is a little predictable.

Erich was introduced to gaming by his grandfather before he could walk. Since then, he has grown up loving Nintendo and most games in general. He couples his love of videogames with journalism to cover news, provide reviews and tell it how it is in the gaming world.
Previous July 6th Valiant Comics Previews: Shadowman, Bloodshot Island
Next Prometheus #2 (Comic) Review