Taking the fight to the Empire on Blu Ray and DVD, season 2 of Star Wars Rebels is coming home. 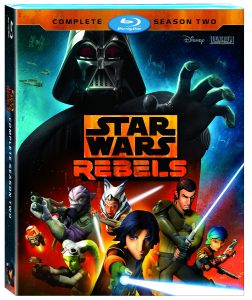 Amid growing Imperial oppression on Lothal, the rebels are forced to seek out new allies throughout the galaxy and additional resources to sustain their fight against the Empire. With the help of Ahsoka Tano, the crew of the Ghost bands together with a secret rebel cell and ex-soldiers from the Clone Wars to join a fledgling alliance determined to restore peace and freedom to the galaxy.

As Ezra continues his journey to become a Jedi under Kanan’s guidance, the threat of the dark side looms large over the fate of the growing rebellion. Darth Vader himself will dispatch new Inquisitors to snuff any spark of resistance, setting the stage for a climactic showdown in which past lives will be revealed, terrible truths will be discovered, and the lives of our heroes will be changed forever.

If you already watch Star Wars Rebels, then you know how great of a show it is. Following up on The Clone Wars animated series, Rebels jumps forward to just before A New Hope. And although it follows a cast of mostly new characters, it’s as ‘classic Star Wars’ as you can get.

Almost all the elements from the original trilogy are present and accounted for. Classic vehicles, troop types, and characters are all over the place. If you’re a fan of the original movies, I have a hard time believing that you wouldn’t enjoy Rebels. Season 2 introduced Darth Vader as a recurring character as well, upping the ante a bit. As a monster-sized plus too, he was voiced by James Earl Jones, just like in the movies.

And as you might expect, there are extras to be had on the video release that you probably haven’t seen. The DVD will have a fair dose of this, and the Blu Ray will get even more. So if you’re a big fan, then the latter is probably the way to go.

The disc’s will land on August 30th, giving you plenty of time to catch up before season 3 starts on Disney XD.

Jason's been knee deep in videogames since he was but a lad. Cutting his teeth on the pixely glory that was the Atari 2600, he's been hack'n'slashing and shoot'em'uping ever since. Mainly an FPS and action guy, Jason enjoys the occasional well crafted title from every genre.
@jason_tas
Previous G2A Adopts New Counter-Measures To Frauds
Next Artistic assassinations abound in Dishonored 2 art book