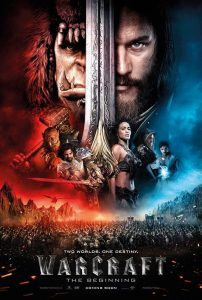 If you’re a video game fan, hearing the words “film adaptation” probably makes you cringe so intensely that it looks as though your face were doing some strange twerking ritual. This was the one thought I had in mind when going to see Blizzard’s Warcraft film.

Suffice to say, I was pleasantly surprised at how well the film turned out. It’s not the greatest fantasy film ever (LOTR still reigns undefeated), but the film is definitely worth seeing, albeit with a few minor issues.

For those who are not familiar with World of Warcraft lore, it’s essentially a war between humans (the Alliance) and Orcs (the Horde) for the land of Azeroth. There are mages, dwarves, elves and warlocks as well, but essentially the plot stems around the Alliance trying to combat the Horde’s invasion of their land (because the Orc land, Draenor, is dying). The film capture’s this element of war astoundingly, also creating the impression that there is no ‘good’ and ‘bad’ side, only those corrupted by evil (Fel magic, which is essentially demon magic).

The cinematography is amazing. A fantasy film of this caliber requires a hell of a lot of CGI and the film integrates it almost perfectly into the scenes. There are a few moments where the CGI is noticeable, but if you’re not looking out for it, you hardly notice it. The action pieces are exhilarating and quite shocking at times. I was often left gaping like a fish at a particularly well executed action piece. The film leaves little to be desired in its action/epic proportions (as is fitting of a war movie).

Coupled with the CGI is an incredibly compelling score that incites a sense of expectancy and adventure. The drums kind of make your heart thump in excitement when there’s a battle about to go down. There’s also a decent amount of fan-service in the film. Quirky scenes from the game as well as previews of cities like Ironforge and Dalaran are scattered throughout. The lore is also incredibly dense… and this is where my criticisms fall.

There’s an entire world’s worth of lore packed into a two hour film here, and while you’d think two hours would be enough to explain everything, it doesn’t. Rather, the film jumps right into the backstory with very little means of explanation.

And what explanation there is, is done at such a quick pace it feels as though you’re cramming for exams without having studied at all. If you’re not a fan of WoW, you’re going to be thoroughly overwhelmed (they make up for it with their bad-ass griffins and raging battles, but still).

There’s no time to grow attached to the characters or understand their personalities either. While the film’s pace is faster than Sonic the Hedgehog, there were some pointless aspects I could have done without. I’m massively hinting at the attempted romance between Lothar and Garona.

I understand the need for it (it makes her apparent betrayal sting all the more) but it just seemed really forced and cached on to me. It felt unnecessary and all that time spent on establishing their sexual tension through stares could have been used to further explain lore or establish connections to significant characters (like Medivh, who I should have felt sad about dying, but didn’t because he didn’t have enough screen time to form an attachment to).

Other than its fast pacing and tacky romance scenes though, the film has definitely surpassed my video game movie standards. The cinematography and score were great and the characters pretty well rounded. I would have liked a more in depth story-line with more character development, but I guess there’s only so much you can expect from a film trying to cram a video game’s worth of plot into a cinematically acceptable time-frame.

It’s an enjoyable film even if you’re not a fan and know absolutely nothing about the franchise (just don’t try and pay too much mind to the lore or your brain will explode). And it’s also a really nice fanservice gift from the creators if you are a fan.

University student studying Journalism who likes to read books and play videogames as a means of procrastination from making life choices.
@mickyJ1905
Previous Chicago gets it’s own Superhero in Nighthawk
Next Last call for GOG’s Summer Sale