NOVA reveals The Secret Lives of Scientists and Engineers

Kind of a tantalizing title for a documentary series, no? But The Secret Lives of Scientists and Engineers is more than just a clever slogan. 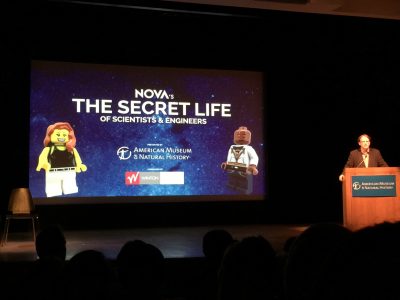 Let’s be honest. Chances are, you see a pretty one-dimensional human being when a scientist gets interviewed on television, or appears in a documentary. The best and brightest usually pop up on frame, deliver their message (whatever it might be) and then pop off.

I know I never really give a thought to the actual person behind the ‘expert’ when they’re talking about scientific study, and I doubt I’m alone in that. Unlike almost every other kind of expert out there, and I mean from any section of society, scientists almost exclusively are shown in one light. They’re stodgy, they’re always serious, and they have no sense of humor.

But who are these people really, and what are their actual everyday lives like? Nobody’s serious and all-business all the time after all. Do they eat, sleep, and breathe science? Is their job the only thing they care about? Of course not! Not only are scientists and engineers everyday people like you and me, but they have the same hobbies (well, let’s say similar hobbies) and interests too! And that’s just what PBS NOVA’s The Secret Lives of Scientists and Engineers shoots to convey.

Previously unfamiliar with Secret Lives, I recently had the pleasure of attending a special ‘live’ version of the doc series, hosted at the American Museum of Natural History in NYC. And after seeing some in-house science-types on stage, I’m happy to report that it’s pretty freaking cool.

Going on its fifth year, Secret Life has produced some 250 short films starring luminaries from the scientific realm. A good number of those have reportedly gone viral too, including one starring Mayim Bialik ( the actress from Blossom and The Big Bang Theory) called Blossoming to Science, which went supernova to the tune of over 2 million views online.

And lest you think that Bialik is the only big name to appear in the show’s library, the likes of Bill Nye, Neil deGrasse Tyson, Michio Kaku, and Steven Pinker (who appeared at the presentation) are all set to appear in this upcomming season. And those are just the headliners, as there’ve been tons more who have appeared, but just-so happen to be names you might not be familiar with.

The event that I attended was proof of that. Hosted by comedian Faith Salie, whom you might be familiar with thanks to her hosting gig on NPR’s Wait, Wait…Don’t Tell Me!, I heard more than a few of AMNH’s finest tell their stories, all of which were interesting.

Take Mark Siddall for example; a parasitologist, Siddall has made a life’s study of leaches. Now that might sound kind of gross… and it kind of is, but consider that there are a myriad of leach species’ out there in the world, and -much like the scientists in this show- some of them aren’t quite what you’d expect. Did you know there are leaches that don’t drink blood? Or that some display advanced parenting of their young?

As interesting as hearing about the little squirmers was, it was also pretty enlightening to hear Siddall talk about a different creature… himself. Having fallen into the study of parasitology almost by accident, Siddall (who’s now one of the most knowledgable in the world on the subject) is also an accomplished chef and even grills on expeditions for the Museum.

We also met ichthyologist Melanie Stiassny, who’s made landmark discoveries in the field and knows as much about the coelacanth as you could possibly imagine, the aforementioned psychologist Steven Pinker, nanotech researcher Rich Robinson (who says anyone can be a scientist if they work hard enough at it), and neuropsychologist Jessica Cail, who’s a stuntwoman. No really, that’s her ‘side job’. She’s even been on Supah Ninjas, a kids action/superhero show, where she wielded twin whips as the villainous Snakeskin.

Not what you expected, is it? In addition to the live presentation and interviews, we also saw quite a bit of the on-screen, web series that is Secret Life. While it’s not carried out in a sit-down, one-on-one interview format, the series gets the point across just as well. Actually, probably a little better since the mini-docs enhance the picture that the subject paints with images and video of them on the go, and in their natural habitat- whether that’s the bowels of the American Museum of Natural History, or on a hunt for something that lives in the bowels of a hippo. Yeah, it’s… varied.

Airing online starting May the 31st (that’s next Tuesday), the fifth season of the show will feature a total of 16 new scientists and engineers, including mathematician Danica McKeller. Does that name sound familiar? That might be because McKeller starred for years on the hit sitcom The Wonder Years as Winnie Cooper. These days, she’s not doing much acting, since hard science is keeping her more than a little busy, having co-authored the Chayes-McKellar-Winn Theorem, a piece of groundbreaking work.

If you’re just a little bit interested in science or really any of the STEM (Science, Technology, Engineering, Mathematics) fields, The Secret Life of Scientists and Engineers is well worth your time. It’s a fun show that lets a little light in on the lives of some of the most interesting people in the world… and hey, maybe you might even learn something (I know I did).

Catch up with new episodes of Secret Life here, on PBS NOVA’s page, and follow the show over on Facebook.

Jason's been knee deep in videogames since he was but a lad. Cutting his teeth on the pixely glory that was the Atari 2600, he's been hack'n'slashing and shoot'em'uping ever since. Mainly an FPS and action guy, Jason enjoys the occasional well crafted title from every genre.
@jason_tas
Previous Deadpool V Gambit #1 (Comics) Preview
Next What will Guerrilla Games unveil at E3?