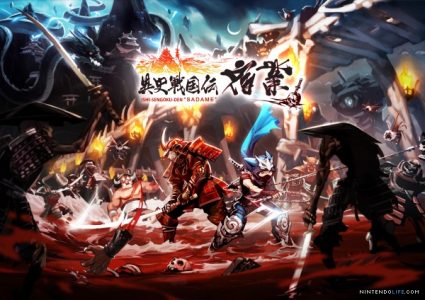 “Sadame” is a game that takes place during an alternate reality of Japan’s Sengoku period which pits four travelling companions in the midst of a demon uprising led by none other than Oda Nobunaga (as if you expected someone else.) The games backdrops are wonderful and compliment the 16 bit aesthetic of it’s characters and the soundtrack truly puts you back into feudal Japan. I found myself many a time, after hacking and slashing my way through a level, just standing in one place and enjoying the music. When it comes to atmosphere, “Sadame” has it in spades.

First and foremost, let’s get to the characters. In “Sadame”, you have the option to choose between four warrior classes (a la Gauntelt, or Diablo, or etc.) First is the Samurai who takes enemies down with his katana with no problems. Next up is the Ninja who uses traps to take down their enemies from afar. The Monk uses a large staff to keep enemies at a safe distance. Last, but certainly not least, is the Rogue who uses bows and polearms as their weapons of choice. I decided to choose the Monk since, as a child, while playing Teenage Mutant Ninja Turtles: Turtles in Time; I always chose Donatello. Not sure what it is about the Bo staff or just staffs in general that calls my attention. In any event, I chose my character and I was ready to beat some demon posterior!

The gameplay was exactly what I was hoping to get. “Sadame” was a hack and slash that let me just walk up to enemies and beat them to a pulp without having to worry about strategies or anything. The way I figured, strategy will come later when I get further into the game and need more powers or spells or better class weapons. I used my intro combo until I was secretly pressing the same button combination while not even playing the game. My fingers would just shadow the three button input and that is where I realized the true problem of this game rearing it’s ugly head like one of the bosses over my reviewers 3rd eye. I have played through several hours of “Sadame” and have wiped out countless enemies and even Bosses… with the same darn combo. There was no need for me to learn any spells as unleashing a spell is time consuming and those two seconds you need to cast becomes an instant mistake. Enemies find these tiny windows in time and attack you to no end. You will end up getting caught in a crossfire of archers and watch your character flinch and retract in pain until your HP is at nil. To be completely honest, while I sacrificed many a life to introduce some spice in my game by trying alternative spells besides my health spell, it proved that my best option was my introductory three button combo from the beginning of the game. You can literally button mash the same combo to the end of the game without no worries and THIS is where “Sadame”, unfortunately, fell very short.

Outside of the repetitive nature of the combat that I had discovered, after several hours of play, I realized that the level setups were also the same. I began the chapter, I would wander through the level collecting blind loot drops (as you won’t know what you have picked up until after the level is over… if you survive that is), reach a section of the level that would have 2 – 3 waves of enemies, get to the next section of the level, collect more loot, cut through 3 more waves and the level was over. Now, unless you happened to be experimenting with spells and happened to get yourself whacked as I did several times trying to change things up, this is when you realize that there is no save system while in the level. If you died mid level, not only did you lose whatever loot you may have found, you also end up doing the entire level over again. This grew to be frustrating at times but the one saving grace “Sadame” has was that you did retain all of the experience you amassed through the level. So if you ever happen to get stuck in a level, keep pressing on and getting that XP. Eventually you’ll be strong enough to wipe the floor with whatever is holding you back.

The only thing that differentiated any of the levels was it’s overall layout and the occasional Boss battle. The Boss battles were just a matter of mashing the same combo buttons again and you will eventually come out triumphant. While the formula is fairly simple (easier than the levels themselves) the Bosses looked EPIC. They would take up the majority of the level screen and whirl themselves at your character. Their overall designs were amazing to see in action and some parts of their bodies were even more animated (a la the creatures crawling through the skeleton boss’ rib cage) and truly gave each Boss a personality of their own.

One really cool thing about “Sadame” that I found pretty interesting was your ability to call on the help of some of the other characters you played with. For example, I began my journey to defeat Nobunaga using the Monk and played through his story first, but this was not the complete story. Only the Monk’s. You see, to get a grasp of the entire story the game is trying to tell, you have to play as all the characters. When you do though, you are able to call on the assistance of any other character you have already started the campaign with. That’s right, “started” the campaign with, not “finished”. You do not need to finish the story line of a particular character to use them in the future for help. I found this to breathe a little fresh air into “Sadame” and added a mechanic that I was not at all expecting.

The loot system is okay but not something that felt really added to the game overall. You are able to find stones that you can set into specific weapons to give them damage enhancements against certain creatures but the best enhancements that I found in my play-through were usually found already preset into the weapon. Usually a just in a drop you will find a weapon that is stronger than one you may have been adding stones to in an attempt to have the strongest weapon possible. My advice, just wait for a drop. Items did not make or break your experience and I didn’t feel that it truly made a difference to the overall gameplay.

While “Sadame” is not a bad game in ANY sense of the word, you will have to get over its overall repetitive nature and fairly simple combat to truly appreciate the things it actually does very well. I enjoyed it thoroughly and had fun playing through this world with its (not so unique) protagonists to get the overall story. The art was wonderful, the music was stellar and the hack and slash is fun for the first couple hours but the combat, loot, and save system overall left me wanting something more.

A fun Action/RPG that transports you to the land of the rising sun.

Overall, Sadame is a fantastically fun hack and slash game that has hours of fun waiting for you to consume. If you don't mind the repetitive levels and unforgiving save (or lack thereof) system, then this is a game worth trying out. The atmosphere, music, art and story are worth the price of admission.

I am an avid gamer and have been since a wee cub. I cut my teeth on fighting androids in the year 20XX (Mega Man), stomping on Goomba's (Mario Bros.) and taking a punch to the face (Street Fighter II Turbo). I still play to this day and am a MAJOR adventure gamer. Single player games are my bread and butter; this is where I spend most of my time, though I have been known to pour a ridiculous amount of hours on Destiny. Damn you, Bungie!!! I love all games from pixelated to Unreal Engine smoothness.
Previous First full trailer for Dreamworks’ Voltron is go!
Next Street Fighter Unlimited to get hardcover edition