It’s uncommon for a game nowadays to feature distinct levels that feel substantially different from one another, but Superhot manages to do just that. Every chapter in this revolutionary indie concept is an exciting, time-warping puzzle that throws away first-person shooter conventions in order to embrace its brand new mechanics. The idea is simple: time moves every time you do, which means that, if you stand still, your enemies and their bullets will freeze. You risk getting killed every time you take a step, but it also allows you to perform some sick moves. It’s a unique idea that creates tension during scenarios where you’d simply mow down countless guys if you were playing a typical FPS.

There’s a one-hit death rule, so if you catch even a single bullet with your body, you’re a goner. Still, the game never feels frustrating thanks to the instant respawns that keep the pace fast and engaging. The levels also allow for replayability and trial and error thanks to their small size and self-contained combat sequences. In fact, the total real-time length of a level might only be five or ten seconds, but the game’s meat lies in those moments where everything is still and you have to meticulously calculate your next move based on your surroundings.

You’ll have some tough scenarios to sort out during these time-bending events, too. Should I try to pick up that throwable object, knowing fully well that doing so takes up a lot of time during which my enemy might have moved slightly to the left by the time it lands? These actions only take up a fraction of a second during a movie or a conventional action game, but in Superhot it’s actually a carefully planned move. 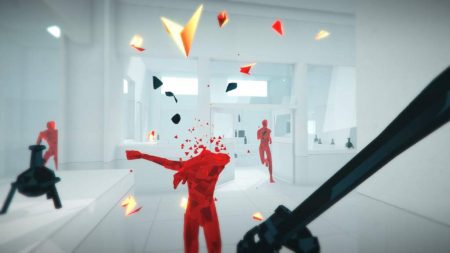 The game packs 32 levels with increasing difficulty and does so by providing less cover spots to hide behind, more entry points for enemies, and more damaging weapons like shotguns or rifles as opposed to the starting levels’ clubs or pistols. There are also situations that would be impossible to survive without the ability to stop time. For example, you’ll eventually find yourself unarmed in a room with three enemies pointing rifles at you. There aren’t any fancy or sophisticated takedown moves at your disposal, so you have a few seconds to take tiny steps and avoid the incoming bullets. It’s exhilarating and tremendously satisfying when you pull it off, and it was one of my most memorable moments with the game.

Although it may seem that way, none of my deaths during my time with Superhot felt unfair or cheap, thanks to the plain white environments glaringly contrasting with the red enemies that break into tiny pieces when killed. There’s also a sound cue that lets you know that you’ve effectively terminated their time in that world, so that you’ll never find yourself killed after clearing out a room by someone you thought you had dealt with.

While 32 levels might sound good on paper, the actual game only takes about four to five hours to finish, and its concept is never significantly developed during that time. For example, Portal introduced new mechanics that kept things new and fresh, but Superhot always works with the same time-bending principle, albeit in different environments. There are no new weapons or effects to master, and in its lack of variety and short length, the game feels a tad underdeveloped, almost like the developers struggled to turn that awe-inspiring tech demo into a full-fledged experience. 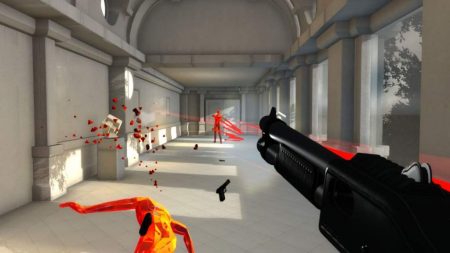 Upon completing the main story, you’ll unlock some very rudimentary challenge modes to play in the same levels, but there’s also an addictive “endless” mode that packs some ridiculous difficulty spikes. There are no leaderboards to be found here, but maybe we’ll see them down the line.

You might have noticed that I’ve put off talking about the story until the very final lines of the review, and that’s because it’s both corny and forgettable. It starts out as a laugh-out-loud cheery 90s hacker story, which I though wasn’t bad, but then it turns into an annoying, nonsensical mess that keeps getting between you and the gameplay. The entire experience also feels very geared towards the imminent VR headsets that will flood the market, and while the gameplay lends itself marvelously to this new way of playing, I don’t think it will make much of a difference story-wise.

All in all, Superhot’s clever use of time-bending puzzles consistently delivers thrilling challenges by forcing you to meticulously plan your next move. It avoids turning into a frustrating affair by offering instant respawns and justifying every death you suffer, and the visuals also help transmit the idea of a simplistic yet challenging game. It has a hard time developing its core concept and in providing a meaningful story, but that shouldn’t stop you from experiencing one of the year’s most unique titles.

I’m a passionate gamer and writer (and BG's US PlayStation Editor) who enjoys action-adventure games and first person shooters and who thinks Naughty Dog can do no wrong!
Previous Get excited: the first trailer for Rogue One is here
Next Brutal Roundup: 4/4 through 4/10