Every bat-character from the man himself down to Mr. Combustible, in alphabetical order. 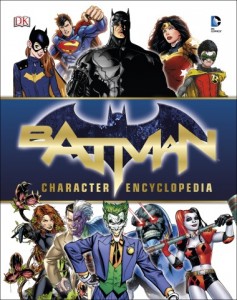 It’s tough to look at any comic book superhero’s rogues gallery or supporting cast and compare them to Batman’s. Some come close, but none match the variety and (occasionally) insanity of Batman’s friends and foes alike. And if you need proof of that, all you need do is pick up a copy of Matthew K. Manning’s Batman Character Encyclopedia.

This little hardcover isn’t what you normally expect to see form a book with ‘encyclopedia’ included in the title. And by that, I mean that it isn’t a general look at the character in question and his or her world. No, this one is all about the characters that inhabit that world. So while you won’t see entries describing the batmobile or the cave, you will find just about every single hero and villain to have graced Gotham’s dark alleys… and a few that haven’t.

Based in the New 52 continuity of DC Comics, which is what makes up the modern DCU, the book gets startlingly current. That can be tough for a tome like this one, but author Manning managed to get everything into it pretty much up till just before Bruce Wayne’s return as a part of the Superheavy arc, after the events in the Endgame storyline.

While it’s plenty fun to just thumb through the book’s 208 pages, finding which entry you’re specifically looking for couldn’t be easier either. The entire volume is presented in alphabetical order, starting with Batman and ending with the low-level crime-boss (and currently deceased) Lawrence ‘Squid’ Loman. You know it’s a well-researched book if The Squid made it in there.

And well-researched it is, as Manning has created a terrifically in-depth read, complete with just about all the info that you could need on the particular characters he covers. Nothing is too overblown though, as the detail that the author gives falls into the ‘just right’ category for something like this. 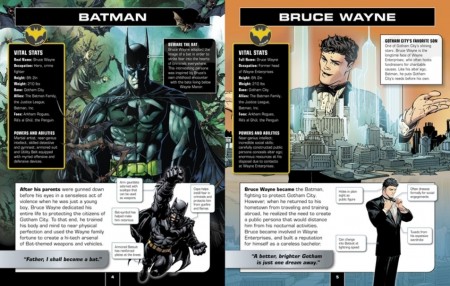 Every entry is broken down into the vital stats for each hero or villain. You get the name(s), height and weight, base of operations, allies and foes, and a Powers and Abilities section. On top of that, there’s also a trio of smaller sections, each one recounting a separate and important factoid.

Of course it goes without saying, but each entry also has a fantastic piece of artwork to go along with it. So if you flip to Superman for instance, you’ll see an illustration of the Last Son of Krypton shattering some chains from the one and only Jim Lee. There’s no common artist here and everything is from the comics themselves, none of the work is original for this book, but it’s all cool nonetheless.

I have to mention too that the overall quality of the book is excellent. The pages are thick and colored beautifully… and they smell good too. There’s just something about the smell of a new glossy comic. Maybe it’s me. 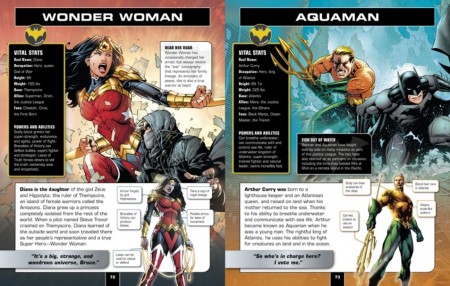 And though the Batman Character Encyclopedia is a smaller book than most encyclopedias, it makes up for it with a nice hardcover depiction of Batman’s fellow heroes and his enemies, split by the famous logo. Oh, and the logo has some gold effects to it too, comes off very nice.

I have a ton of DK-published encyclopedias from loads of different characters, but this one stands out a bit from all of them. While they’ve produced plenty of great books over the years, some overall looks at characters and universes, some focusing on technical stuff (like the ships of Star Wars, etc…) I don’t think I’ve seen one that is just characters. And it’s pretty damn cool.

As a reference, the Batman Character Encyclopedia could be a little more in-depth, but that’s not really what it’s supposed to be. This is basically a fun look at one of the greatest rogues galleries and some of the most legendary heroes in comics, and in that it shines.

I’ll definitely count this a part of my bookshelf for the indefinite future, and will more than likely pull it down and leaf through more than a few times. The Batman Character Encyclopedia is highly recommended for any Batman fan, and I think pretty much every DC Comics fan out there would find a great deal of enjoyment out of it too.

Jason's been knee deep in videogames since he was but a lad. Cutting his teeth on the pixely glory that was the Atari 2600, he's been hack'n'slashing and shoot'em'uping ever since. Mainly an FPS and action guy, Jason enjoys the occasional well crafted title from every genre.
@jason_tas
Previous What would Dark Souls look like if it was directed by Eli Roth? Like this.
Next Final Fantasy XV: Platinum Demo Impressions