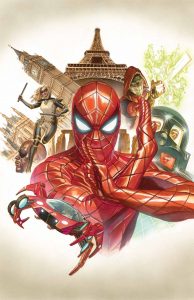 Strap in webheads because the webswinging wallcrawler is in for yet another action-packed story arc! Today, Marvel is pleased to present your first look at AMAZING SPIDER-MAN #9 – the first chapter of “Scorpio Rising”! You thought Mr. Negative and Cloak & Dagger were tough? You ain’t seen nothing yet! Writer Dan Slott and artist Giuseppe Camuncoli put Peter Parker through the wringer as he faces down the remains of the international terrorist organization known as THE ZODIAC! Scorpio has put his master plan into action. It’s all been leading to this! If he succeeds, there’s no way Spider-Man or ANYONE for that matter will be able to stop him. It’s a race against time across Europe as Spider-Man and his allied hunt down Scorpio before it’s too late. Jump on board the series everyone is talking about when “Scorpio Rising” kicks off this March in AMAZING SPIDER-MAN #9!

Right in line with what Marvel has been doing with Spidey as of late, Amazing #9 has the wall-crawler traveling the globe, battling new baddies. Looks like we get a fair bit of Nick Fury in this issue too, what’ll no doubt carry over into the new arc in general.

And I’m sure that familiarity will extend past the printed page, and onto the silver screen too, as Spider-Man is set to debut in the MCU with this Spring’s Captain America: Civil War. All in all, it’s a pretty happening time for Spidey fans. Lots of changes and new stuff, but of course- same old Peter Parker.

Jason's been knee deep in videogames since he was but a lad. Cutting his teeth on the pixely glory that was the Atari 2600, he's been hack'n'slashing and shoot'em'uping ever since. Mainly an FPS and action guy, Jason enjoys the occasional well crafted title from every genre.
@jason_tas
Previous It’s a very special Valentine’s Day mode for GTA Online
Next Toy Fair 2016: DC Collectibles runs wild with Icons and B:TAS