Home / News / Guitar Hero Live continues to rock out in 2016

Guitar Hero Live continues to rock out in 2016

Just because the year has flipped over into 2016, that doesn’t mean that the recently released Guitar Hero Live is going to be rocking any less. 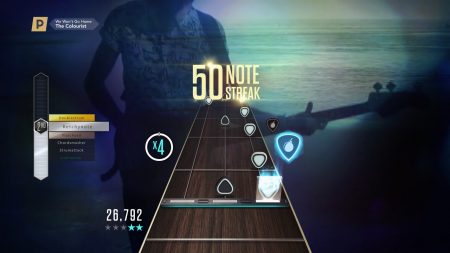 A trio of new premium shows are now live and in living color on the GHTV channel in Guitar Hero Live. The online portion of the game, and one of the main reasons that people are still jamming away on the game, GHTV offers a selection of free songs that you don’t download, but instead play on demand or from within the confines of ‘premium shows’.

And there’s a nice selection of those that’ve just been loaded up for the game, including rock, metal, and some pop tossed in for good measure. Here’s what’s up:

Rock Till You Drop!
* Weezer – Back To The Shack
* Joe Satriani – Shockwave Supernova
* Nickelback – Get ‘Em Up

Jason's been knee deep in videogames since he was but a lad. Cutting his teeth on the pixely glory that was the Atari 2600, he's been hack'n'slashing and shoot'em'uping ever since. Mainly an FPS and action guy, Jason enjoys the occasional well crafted title from every genre.
@jason_tas
Previous 20 Years of Pokemon
Next The dead rise in Marvel Comics… or something