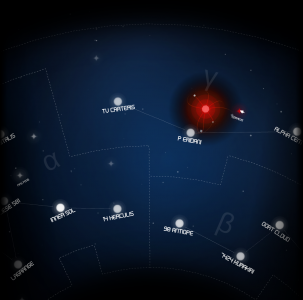 0rbitalis is a satellite-launching simulator, that plays like a puzzle. As the tag says, ‘defy gravity, with just one click.’ Sounds easy, right?

0rbitalis reminds me alot of a game that I’m sure every gamer has played over the years, regardless of what generation they came up in. In some version or another, almost everyone has played Tetris. Like Tetris, if you have five to ten minutes you can probably play through a level or two. Or if you want to put in the time, you can sit for an hour, and see how far into the constellations you are able to travel.

In the era where a digital download can take hours, this game was downloaded and playable in fifteen minutes. I ended up loading up this gravity-defier while I was downloading additional titles. The introduction was a bit sparse. I had no idea what I was doing for the first half-dozen lives or so. All you see to begin with is a white square, and red line that you learn is your predicted flight path. In just a few minutes, I was able to pick up what was going on here. With your trajectory displayed, you have to try and plan where your satellite will orbit, without going too far, leaving orbit and into the vast emptiness of space. 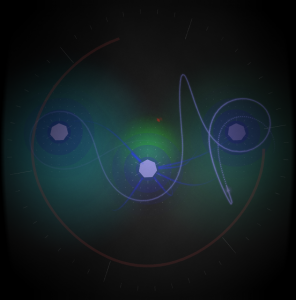 Now, in the beginning when you have one star and one sun, this isn’t too difficult. Launch your satellite far enough to avoid these two objects, and you are in the clear. Naturally, after a few levels, the difficulty begins to increase. When you are working with one sun, four stars and nine shooting-star type artifacts, it becomes quite challenging to complete your orbit.

Visually speaking, Zucconi kept the color palate simple, but rotated enough to keep you from getting bored easily while playing the game. Fading colors of blues, greens and yellows keep your eyes happy while you focus on what stars were going to affect your trajectory. Keeping the obstacles brighter tones of whites and light blues make them stand out, and easy to identify. This helps alot when there are a dozen little asteroids pock-marking your screen.

As for the soundtrack, Zucconi did a wonderful job picking out music that kept you tuned in. The subtle atmospheric-like tunes wafting around, as well as a mix of mild electronic instruments checking in, make it feel like being in space would be second nature to you. I have gone so far as to pull up the tracks on Youtube to listen to them again. Sometimes you need a soundtrack that is not going to overtake the project it supports. Bravo Zucconi. 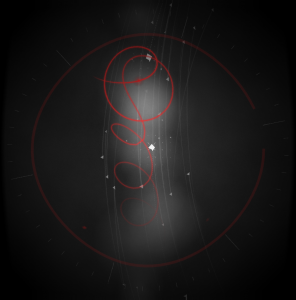 There is not much of a story for this title. Launch a satellite, and see if you have what it takes to keep your satellite in orbit. Go to far, and your satellite is lost. Do not pay attention to what is in orbit around you, and you will not last long.

Given the lack of story, I can see a moderate replay value to 0rbitalis. There are plenty of gamers out there that just want a casual item to occupy their time before their next responsibility. 0rbitalis is a great item that you can load quickly, and play as little or as much as you like.

0rbitalis surprised me. I was figuring there would be a guiding story to the game, but I was mistaken. In the beginning this bothered me, though after I figured out what I was doing, it no longer mattered. Luckily the game was simple enough that they can get away with the fact that they had no explanation of movements. I enjoyed the soundtrack which was able to keep you distracted while you plot where you want to fire your satellite. Granted I have only worked through the first of several sectors, I have no doubt I will find myself working across more galaxies in the near future.

If you are looking for a title that you can play without dedicating 30+ minutes to a level, I recommend giving 0rbitalis a shot. Catch this title in orbit on Steam for $9.99.

A fan of media on multiple platforms, I am always watching or playing something! Who knows what I will be on to next?
@mackeyp42
Previous NYCC 2015: Dark Horse announces Aliens ongoing series
Next “Back to the Future” DLC coming to Rocket League