It’s Thunderdome! And it’s actually not a bad Max film, despite it’s reputation. The disc on the other hand, well, not so much. 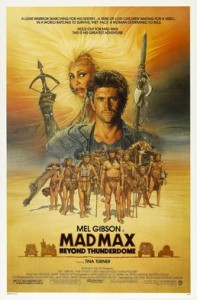 I was always under the impression that Beyond Thunderdome was considered a pretty iffy movie in general, and a downright bad film as far as the Mad Max franchise is concerned. Personally, I hadn’t seen it in -easy- 20 or so years, and I’d forgotten pretty much everything about it.

So when I had the chance to review the Blu Ray release, which didn’t hit all that long ago, I grabbed it. With Fury Road releasing this year, I’ve been in a bit of a Mad Max frenzy since, so I’m more than happy to dive into anything and everything that holds ‘Mad Max’ in the title. And with that, I have to say that this Blu Ray releases is something of a disappointment.

Before we get into the disc itself though, lets talk about the film. Packaged in a pretty impressively illustrated box is the black sheep, and for a long time the last, of the Mad Max movies. Starring Mel Gibson in his final turn as the character (for now anyway), Beyond Thunderdome finds Max on the road, lost in the increasingly barren wasteland that used to be Australia.

After the events of The Road Warrior (Mad Max 2), Max seems to have actually put together something of an existence. The movie opens with him seated on a car that’s out of gas, being pulled by a heard of camels. His vehicle is loaded for bear with what looks like a lifetime of ‘stuff’. This doesn’t last long though as he’s buzzed by a plane, a rare sight in this dismal future.

To make a long story short, it’s an old acquaintance (who’s presence and life is never addressed in the story)  who makes off with Max’ one-man caravan and heads for a despicable hive of scum and… oh sorry, I mean Bartertown. It’s a place that is a bastion of civilization, but one thats hopelessly corrupt, and pretty much as horrible as anyplace else in the Max Universe, just with electricty, laws, and some order.

I won’t spoil any more of the story for you, but know this – even though it isn’t terrible by any means, Beyond Thunderdome is the odd man out in terms of Mad Max films. It’s very different in tone, feel, and action from any of the other movies in the series, and that includes Fury Road. I had heard a few times from people that this one was Warner Bros’ attempt to make the character and his world more mainstream, and although I don’t know if that’s the case or not, you can easily see that that was the goal form the content.

All the elements are there, with the exception of a love interest for Max, which in retrospect seems odd that it was left out. Overall though, there’s a lighter feel, a bunch of kids that Max has to care for and lead, less violence, and just less ‘grit’ overall. That’s the best way I can think to put it, but I think it works.

That’s not to say that it’s a terrible film really, and there is some really cool stuff (especially a visual at the very end), it’s just that as movie I wouldn’t recommend it was viewed first to anyone new to the series. In fact, if you are new, then you might want to watch the first two movies, then Fury Road, then Thunderdome, just for the sake of completing the cinematic story thus far. Oh, and according to our own Jake C, Thunderdome is a lead-in for the new Mad Max game as well, which takes place before Fury Road, so you might want to watch this before you play that.

So that’s about the film, as for the disc itself, it’s not very good at all.

You’ll find next to zero special features to watch- no interviews, no featurettes, no ‘making ofs’, nothing. What you do get is a single trailer. That’s it. The movie looks and sounds just fine, which is a good thing of course, but there’s nothing for Max fans to dig into in any way, and definitely no reason for fans who’ve seen this movies before to buy it, unless they really want the whole series on Blu Ray, which I could understand.

I think it’s a real missed opportunity though, and this would have been way more of a ‘must buy’ for fans if there was say, an interview with Tina Turner (she plays the main villain), or a look at how the gladiatorial arena that is the Thunderdome actually worked, or even how it was made. Anything really, would have added something, especially since you don’t see much on Thunderdome in general.

The weakest of the Mad Max films overall is still an enjoyable movie to watch, but maybe only for completionists who want to make sure they see the whole story from beginning to its current point. It just doesn’t have that grimy and gritty magic that director George Miller infused into the first two movies and Fury Road.

Not bad, but not great- and don’t buy it thinking you’re going to get a ton of special features for your buck.

Jason's been knee deep in videogames since he was but a lad. Cutting his teeth on the pixely glory that was the Atari 2600, he's been hack'n'slashing and shoot'em'uping ever since. Mainly an FPS and action guy, Jason enjoys the occasional well crafted title from every genre.
@jason_tas
Previous Sonic Boom sequel zips off into 2016
Next Deep Silver cans Dead Island: Epidemic