IDW combines horror and politics in The Eighth Seal

Horror in politics doesn’t sound like too much of a stretch, but The Eighth Seal from IDW Publishing takes the theme a few steps beyond pandering and attack ads. 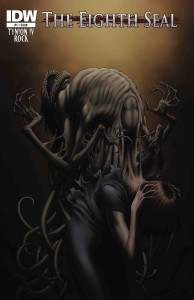 “The Eighth Seal is the purest work of horror I’ve tackled in my career, and I’m thrilled to see it come to life again in print,” said series writer, Tynion IV. “There’s nothing more frightening than the distinct feeling that you’re going insane, that something in you has twisted and is pulling you towards your darkest instincts… It’s the fear that something inside of you can destroy everything you love. And when you’re the First Lady of the United States, the stakes are only that much higher.”

Intrigued? I know I am, and I’m not even all that much of a horror fan. That’s James Tynion IV above, talking about his creation The Eighth Seal by the way. The comic stars the First Lady of the United States, but all is far from well.

Instead of being embroiled in some political turmoil or the latest scandal to hit the White House, the First Lady is instead presented with the case that she might very well be going completely mad. And if she isn’t, then there’s something far worse going on.

“I’ve been a huge fan of James and Jeremy’s work on The Eighth Seal since I first saw it, and it makes me very happy to see this series come to IDW,” said series editor, Michael Benedetto. “The atmosphere here is horror at its finest, and I’m sure many will agree after picking up the first issue. The political and psychological elements are blended perfectly and lead to an ending that does not disappoint!”

The Eighth Seal originally debuted on Mark Waid’s Thrillbent.com, which showcases digital-only comics, but is now making the transition to the physical realm. You can expect art by Jeremy Rock, as well as cover work by a series of talents like Ming Doyle, Riley Rossmo, and Travel Foreman.

Sounding very much lie something to keep on your radar, The Eighth Seal hits comic shops this December.

Jason's been knee deep in videogames since he was but a lad. Cutting his teeth on the pixely glory that was the Atari 2600, he's been hack'n'slashing and shoot'em'uping ever since. Mainly an FPS and action guy, Jason enjoys the occasional well crafted title from every genre.
@jason_tas
Previous EA announces Star Wars Battlefront beta
Next Watch the opening cinematic for Halo 5 right here (no really, watch it)